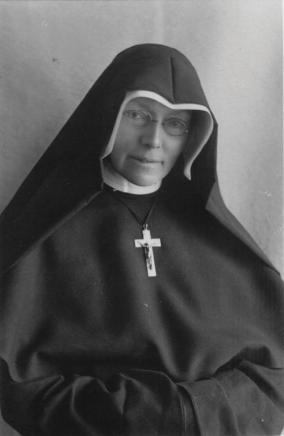 An extract from an address given by the Congregation Leader of the Columban Sisters, Sr Ann Gray, to Australian and New Zealand pilgrims who were part of the pilgrimage commemorating the 1400th Anniversary of St Columban’s death. In August 2015 the pilgrims were welcomed to Magheramore, the Columban Sister’s Mother House in County Wicklow, Ireland.

It is now almost 90 years since our Sisters set out on their first mission to China during which time we have constantly experienced that “whoever follows Christ will have the light of life”.

The settings of mission today may be different but the needs and the call of the poor continue. To illustrate this, I would like to share with you two short accounts given in The Far East magazine by two of our Sisters, more than 80 years apart.

In 1929 one of our Sisters wrote, “A few days ago we set out to visit the sick in the suburbs of Hanyang. The traffic was just as congested as ever and, as usual, we had to pick our way through the jostling crowd and the rickshaws and the everlasting procession of coolies swinging their heavy loads. Even live pigs are carried in this fashion, protesting loudly but to no avail for the Chinese don’t mind noise in the least – in fact they rather like anything that adds to the general uproar.

After about half an hour’s walk we could see our destination – a small hut among the graves and surrounded by a sea of soft slippery mud – how we were to reach it without sticking or falling was the question. Of course we laughed – we had to, apart from the fact that it was the right thing to do for the benefit of the crowd who were watching our struggles, for we are told it is a principle in China that, no matter what the predicament is, so long as one keeps laughing, one doesn’t lose face, although indeed it wasn’t our faces we were anxious about losing at that moment, but our shoes!

When we reached the house, we tended to the children who were sick and to the father who was dying on his feet from consumption. They live in such poverty too – it makes one’s heart bleed – to think of all the wealth there is being wasted in the world and that poor man trying to eke out a miserable existence for his small family by making matchboxes.” 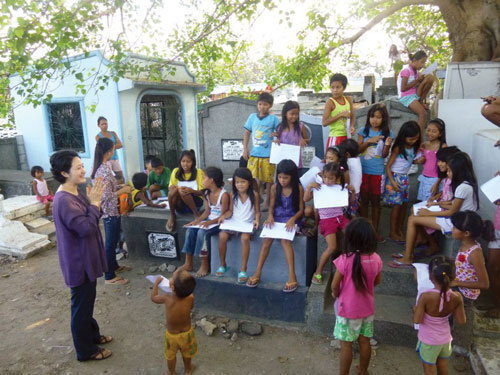 Now fast forward to 2015 when a Sister writes from the Philippines, “I went to visit and meet the people who have no place to live but in the cemetery where they eat and sleep on top of the tombs. Many earn their living by cleaning the tombs. The children were dirty, some with no clothes and most without shoes.

Their classroom was a plain tomb in an open area with no roof on it, no chairs, no desks and no shelter. After a while the children began to come and it was bedlam.

The class started but some of the children were jumping from tomb to tomb. I was upset and to make matters worse, it started to rain. But that didn’t bother the children. It was only the missionary Sister (me) who ran for shelter.

I did not want to go back to this dreadful place but I knew I could not reject the children who showed such a hunger for learning. So I went back.”

Sr Julie not only went back and developed a very vibrant and much needed ministry among these people of the cemetery, she has succeeded in encouraging another Columban Sister to work with her!

How is any of this possible?
It is because we have inherited and strive to live the motto of our patron, St Columban, “Let us be of Christ, not of ourselves”. And the conviction of our founder, Fr Blowick, “The work is God’s not yours or mine.”

Columban Sr Ann Gray is the Congregational Leader of the Columban Sisters. She resides at their Mother House, “Magheramore” in County Wicklow, Ireland.