Dialogue of ordinary life in Pakistan

Louie Ybanez, a Columban seminarian from the Philippines, shares with us the importance of interreligious dialogue in Pakistan. Louie will spend two years in Pakistan as part of his missionary formation before ordination to priesthood. 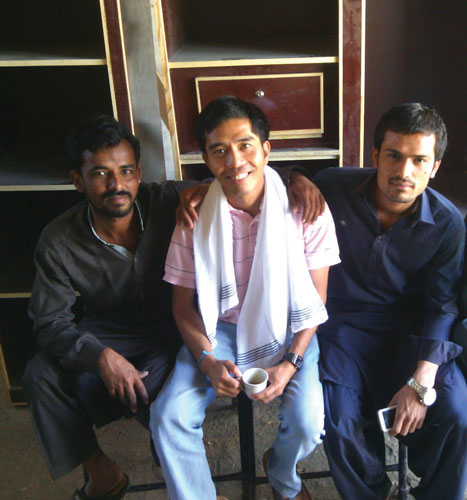 I am assigned to St Joseph’s Parish, in Matli, the Diocese of Hyderabad, Pakistan. The parish has a Christian community that lives close to Hindu and Muslim neighbours. This is a great start for my interest in interreligious dialogue.

One finds many prejudices among the different religious communities. It seems that sensitive issues are often brushed under the rug for fear of an outburst of violence. If buttons are pushed, so to speak, it could lead to an outburst such as what happened in Lahore in 2014 when two churches were bombed. Two men suspected of involvement were beaten and burned to death by an angry mob.

Because of this, we look for opportunities that present themselves in ordinary daily life to share and witness to our faith.

Saleem and his Sons

I got to know Saleem and his sons, Imran and Amir, through Columban Fr Tomás King. Many times they have been commissioned to do some carpentry work for the parish church. During my free time, I go to their shop. We talk mostly about carpentry. I share my thoughts as well. The two sons are very friendly. Through them I have become aware of the traditions and culture of Pakistani Muslims. I also tell them about the Philippines and our culture and traditions. They introduced me to many of their friends. This has helped me grow in confidence in getting to know many Muslims and relating to them.

The man on top of the bus

Once when I travelled to Badin from Matli, the bus broke down so I had to transfer to another bus. As it was peak hour I had no choice but to climb up to the bus roof and sit along with many people on their way home from their work. I sat comfortably in the centre of the roof with a good scenic view of the Sindh plains. Many of my fellow roof passengers were surprised and interested as to why a seemingly “Chinese man” would climb up the roof for half of the fare. Anyone from other parts of Asia is usually assumed to be from China.

Soon enough I got into a conversation and my little Urdu language became very handy. What caught my attention was this young man who wanted to talk to me but was unable because he sat too far away. He noticed the cross on the rosary bracelet that I wore that time.Unable to be heard he points to the cross and then his finger went to point towards the sky. When we reached Badin, I asked him if he is a Christian. He was a Muslim. I was stunned by a Muslim associating the cross with God. We introduced ourselves and parted ways with a handshake.

Here in Pakistan dialogue happens in the everyday reality of life. It happens as I walk down a busy alley, as I respond to the greetings of my Muslim and Hindu neighbours, as I go through different shops and am offered chai (Pakistani tea) as a sign of hospitality. In the school, I get to witness friendship between children of different religions. It comes about when I go to a barber shop and engage in casual conversation when being asked all sorts of questions or when I travel on a public bus where I get to stand beside a complete stranger and engage in conversation on the harsh but sometimes funny reality of Pakistani life.

Louie Ybanez, a Columban seminarian from the Philippines, currently lives and works on mission in Hyderabad, Pakistan.