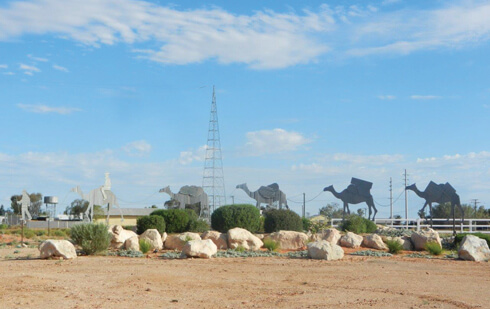 In 2016 I had both the privilege and challenge of spending time in the far west of Queensland while I was doing mission promotion for the Columbans in the Diocese of Rockhampton. Just as I was about to return to Melbourne after visiting the last of the parishes where I had promoted The Far East magazine, the Bishop of Rockhampton, Most Rev. Michael McCarthy, asked if I could stay on and help out in the parishes of Blackall and Longreach (approximately 700km from Rockhampton) from mid-September to mid-November while the parish priests took their holidays. I’d originally visited Blackall and Longreach for mission promotion in May but when I returned I discovered that far West Queensland had its own share of surprises I’d never experienced before.

My first surprise came when I was filling in for Fr Bill Senn in St Patrick’s Parish, Blackall. On my first weekend when I arrived in September I had to travel to Barcaldine a 105km away to celebrate 6:00 pm Mass there instead of Blackall. Overnight it rained. The following morning I was supposed to celebrate Mass in the towns of Jericho and Alpha to the east, 80km and 140km from Barcaldine respectively. However, when I rang the ladies in charge of the communities of Jericho and Alpha, they both told me emphatically: “Don’t come, Father!” The first lesson I learned in the west was when it rains stay put or suffer the consequences.

Before I arrived in Longreach parish, Fr Rob Hollow, the parish priest, had planned I would celebrate Mass for the small Catholic community in Stonehenge, 200km from Longreach, on my first Sunday there. However soon after arriving Fr Rob informed me that Leonie who was coordinating the Mass had rung to tell him I shouldn’t come. Some of the locals had organized a cricket match with a rival town and the whole community had been called on to help support the event. I was to discover this again and again, when community events took place religion took a back seat. It wasn’t that people lacked faith but rather everyone had to pitch in when help was needed, regardless of religious background. In reality, it is a very ecumenical approach to life. Also priests are always wise to check close to the date of any Mass to find out if unforeseen circumstances had arisen to avoid travelling long distances for a Mass which no-one attended.

These factors all came into play when I decided to make a missionary journey to the far west of Queensland near the Northern Territory border during my last two weeks in Longreach. I hoped to visit Boulia, Bedourie and the iconic town of Birdsville, a journey of over 800km from Longreach, in order to celebrate Mass for the people in these isolated towns. However, it didn’t quite work out that way!

When I arrived in Boulia at 4:00 pm on the Tuesday afternoon I rang the parish secretary. She told me that she’d advised everyone I was coming and invited all the Catholics to come to Mass at 6:00 pm in the parish church. 6:00 pm came and went with no sign of anyone.

On Wednesday morning I set my sights on going to Bedourie where I caught up with Mrs Michelle Dillon whose brother Matthew Moloney is a priest in the Rockhampton Diocese. I’d hoped to celebrate Mass for the Catholics here also but there was no such luck! Michelle told me with a resigned smile: “Oh Father, what a pity! If only you’d come last week but everyone’s at the swimming carnival now and we can’t come!” She expressed concern when I told her I was en route to Birdsville as a storm was predicted for that area, though she thought that it would possibly arrive in the afternoon the following day.

I arrived at Birdsville at 5:00 pm on Wednesday and set about trying to find the home of Nell, a leading Catholic in the town. When I rang, Nell was initially very welcoming but after a minute a note of anxiety crept into her voice. Instead of inviting me to her home, as I’d hoped, she told me to come for breakfast the next morning. She explained that her husband had flown out to his cattle stations and wouldn’t be back till late evening. Sadly, I never made it to breakfast with Nell and her husband the following morning and nor did I celebrate Mass with them! In the early morning, I was woken by what sounded like bullets hitting the tin roof of the motel room in which I’d been sleeping. The expected rain had come at 4:00 am in the morning, not 4:00 pm in the afternoon! I wandered around unsure of what to do. The rain fell in torrents and I feared I could be stuck in Birdsville for weeks waiting for the road to dry knowing I had Masses in Longreach on the weekend. I decided to pack my belongings and go out to the edge of town to see what the sign erected to warn motorists about the condition of the road might advise me to do. The sign advised caution but I decided to do the opposite and throw caution to the wind!

I headed back towards Bedourie post-haste. God seemed to be on my side as the rain hadn’t yet turned the gravel road to mud and I made it safely back to Longreach that night having covered 1932km in three days!

In one way, I felt my intended mission to the far west had been a flop since I had not celebrated one Mass for the communities I’d hoped to meet. On the other hand, I was overwhelmed by the vastness of the land and sky of the Western Queensland horizon which put my puny efforts into perspective over and against the majesty of God’s presence in such a limitless landscape. I couldn’t help but reflect that this was perhaps the true experience of mission God wanted me to have.

Columban Fr George Hogarty SSC was a missionary in Peru for eight years. He is currently travelling around Australia promoting The Far East magazine.