Death of a human rights giant 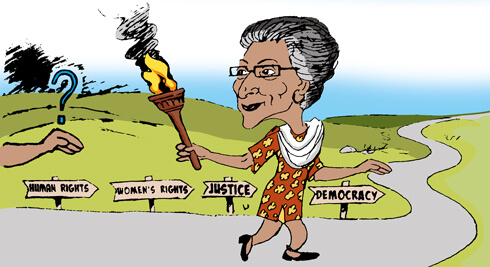 Based in Pakistan, Columban Fr Daniel O’Connor recalls Asma Jahangir as a brave human rights campaigner who was an inspiration to many in her native Pakistan and elsewhere around the world.

When I heard of the death of Asma Jahangir I thought she may have been assassinated. On February 11, 2018, she collapsed while on a telephone call and died suddenly of a brain haemorrhage. She has left behind her husband, two daughters and a son.

Born in 1952 into a Muslim family and raised in Lahore, Asma attended the Convent School of Jesus and Mary. Later, she received her Bachelor’s degree from Kinnaird College and she did further studies at Punjab University.

During the 1980s she became a pro-democracy activist and was imprisoned by the military regime of Zia-ul Haq. Some years later, Asma was placed under house arrest by another military dictator, Pervez Musharraf.

Ms Jahangir co-founded the Human Rights Commission of Pakistan in 1987 and in the early 1980s the Womens' Action Forum. She was the UN Special Reporter on Freedom of Religion from 2004 until 2010, as well as serving on the UN panel for inquiry into Sri Lankan human rights violations and on a fact-ﬁnding mission on Israeli Settlements.

Though short in stature, Asma stood tall against the powerful bigots who were her biggest opponents. They were scared of her. Her relentless ﬁght for justice and for the rights of the people made those in power uneasy.

Her fearlessness made them shudder and her quest for regional peace earned her the wrath of the war mongers. Asma was the conscience of the nation. She was an iconic lawyer, activist, valiant and brave champion of human rights, and she stood undaunted in the face of extreme pressure often shrugging off death threats.

Friends, colleagues within the legal profession, intellectuals, minorities, politicians, civil society members and her many admirers were in a state of shock and disbelief on hearing of her sudden death.

Columbans in Pakistan had the utmost respect for Asma and found her to be an inspiration. We had active support and solidarity from her on the issues of bonded and enslaved labour. She was a proactive advocate in the movement to put an end to bonded enslavement of brick- kiln workers in the Punjab.

Columbans were on mission in Sheikhupura Parish for many years where parishioners struggled to make a living under the very oppressive Peshgi system operating in the brick-kilns. Poor labourers got sucked into huge debt by accepting cash advances offered by the kiln owners to help the workers. The labourers often availed of these cash advances when a medical emergency arose for a family member but this left them more vulnerable and gave the owners more control over them.

Working in a brick-kiln factory in many ways could be compared to being in a prison from which there is no escape. The majority of labourers are illiterate and deductions from their earnings are made on 'pay day'. Under the Peshgi system, brick makers became lifelong debtors whose descendants had to continue to pay off the debts.

As a leader in the Human Rights Commission Pakistan, Asma Jahangir fought for the rights of bonded farm labourers in Sindh. In the late 1990s and early 2000s thousands of these poor people were freed from the clutches of feudal landlords. Many were rehabilitated on church land in Matli Parish, then run by Columbans. Asma herself visited Matli and Interior Sindh on a number of occasions offering solidarity and support. On one occasion she donated money, having received it for an international award that she had won, and purchased land to rehabilitate freed labourers.

Her sudden death has jolted us and those who shared her vision in Pakistan and throughout the world. United Nations Secretary General, António Guterres said that her passing was "echoing within her native Pakistan and across the world. We have lost a human rights giant," he declared.

Asma was a torch bearer for human and minority rights, who put up huge resistance against intolerance and retrogressive elements of all kinds.

Friends recall her courageous defence as the 'voice of the voiceless'. She took on dangerous cases that no other lawyer would touch, such as the case of the Christian man, Salamat, who had been falsely accused of blasphemy.

In 1985, she rattled the Ulema/Islamic Scholars Council who were promoting anti- blasphemy laws. She did not win that ﬁght and was viliﬁed by them and others. She made it a priority to defend victims of the blasphemy laws.

Asma was a brave and outspoken woman who showed resistance to dictatorships and struggled for the restoration of democracy. She was principled, fearless, the kind of woman who possessed a determination to confront evil and defend the vulnerable; she insisted that Pakistan live up to its democratic, constitutional and secular foundations.

She was an 'iron lady' who had the aura of grit and determination to ﬁght 'tooth and nail' to champion the cause of oppressed women, children, bonded labourers, religious minorities, the disappeared and journalists. She confronted injustice wherever she encountered it.

Though her death may have deprived the country of its bravest soul and a fearless street ﬁghter, her legacy lives on. In Pakistan, the institutions of democracy are weak and the systems for protecting fundamental rights are under attack. Asma Jahangir fought the good ﬁght up until her last day.

Darkness continues to sweep the country. New champions of democracy, human rights and human goodness need to follow the inspiration of Asma and rise to the struggle that she so gallantly led.

Columban Fr Daniel O'Connor from New Zealand has worked in Pakistan for over 30 years.