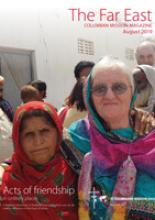 While this edition of The Far East magazine has not been published as a special vocations edition, a strong theme of vocations and commitment…
Read more

But my lasting memories of that Mass, are when Henry said, “Nothing has really changed, I’m still Henry”, and the enormous congregation lining…
Read more

A profound witness to the Columban motto

He held onto his academic discipline throughout his life, believing that excellence should be reflected in everything he did, including his preaching,…
Read more

Reflection - Decluttering - Do your spiritual practices bring you joy?

Like anything, the spiritual life can become stale or predictable, and cease to bring the joy that Jesus came to give (John 10:10).
Read more

Immersed in the spiritual and cultural world of the Subanens and affirmed by the Church’s teachings, the Columban Sisters have worked for decades…
Read more

Goodbye to a faithful Catechist

In spite of this calamity, Karolo’s faith never wavered and he continued serving his community faithfully over the years.
Read more

Acts of friendship in unlikely places

Sr Roberta Ryan is a Columban Missionary in Pakistan. Living there has shown her how we can all make a difference in the lives of others.
Read more

From the Director - God made me do it

It makes us wonder – “Why does God need priests?” The answer is “We need priests to remind us that we are in God and God is in us.”
Read more

A pigs head and tail

So I was quickly discovering that even though Korea had modernized to a large extent, many of the old loveable traditions and customs were surviving…
Read more

Giving away a daughter to mission

Hazel's parents prepared lunch in their house and her mother shared how she felt when Hazel had spoken to her about her last will and testament.
Read more