Acts of friendship in unlikely places

Sr Roberta Ryan is a Columban Missionary in Pakistan. Living there has shown her how we can all make a difference in the lives of others. 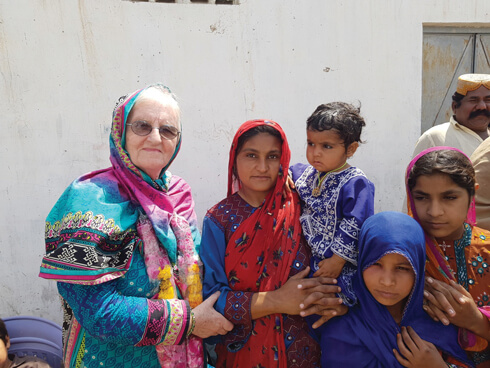 The best and most beautiful things in the world cannot be seen or even touched – they must be felt with the heart."

This insight comes from the pen of Helen Keller who, though blind herself, inspired countless others gifted with sight to discover its truth in their own lives. I am one of them.

Almost every Sunday for the past 15 years, I have found myself among a small Christian community of around a hundred families in an inner city slum in Sindh, Pakistan. For the majority of them, both men and women, their daily lives are unremitting hardship as they seek to support their families on the meagre wages they earn as day labourers, street sweepers, sanitation workers and domestic helpers. We gather together in the small chapel built by this local community and not owned by any one Christian denomination, where Mass and other religious services are held at varying times.

Often they go to each other's services as they identify themselves as Christians ﬁrst and then by their denomination. Being a minority faith community in a predominantly Muslim country causes them to seek strength and support from each other. In the same way that Muslims revere and respect the Holy Koran, our Christians cherish the Bible as the word of God. One way they express this is by placing it in the highest place of honour in their one-room homes.

Even though they are great singers and musicians very few will have gone beyond primary school. Some are illiterate and only a handful get the chance of going to university. Education, at all levels, is, for the most part, sponsored by priests and Sisters through donations from abroad.

After a Mass, interspersed with lengthy hymns set to vibrant local melodies, the little chapel becomes 'home' to the Sunday school children. Most of the children, who are aged between three and 15, go to Muslim schools nearby where they only learn about Islam. In small groups at the Sunday school they are taught their prayers and come to know Jesus as their friend. The Gospel is read, shared and dramatised by the older ones, while the little ones enthusiastically act out their bible songs.

Later, weaving around the narrow alleyways and sitting in people's homes, you hear about the burdens they carry, the frustrations that plague their efforts to improve their lot and the debts that hold them back. Added to this mix are family squabbles and feuds, incidents of violence, and addictions of every kind, born of poverty, unemployment, lack of opportunity and a sense of hopelessness that things will never change. Sudden or chronic illness of any member of the family, young or old, can be the cause of a rapid descent into deeper deprivation as meagre resources mean borrowing from loan sharks who charge outrageous rates of interest, which are claimed back with a vengeance.

But this is only one side of the coin. What is not often heard or shared are the many quiet acts of friendship, neighbourliness and generosity - hidden from the eyes of others - that sow seeds of hope in those who receive them. In the most unlikely places, and in the most unexpected ways, people that others write off and have no time for, are bringing God's kingdom to birth - they live their lives with their ﬁnger on the pulse of our common humanity and see in others a brother or a sister.

Nothing shows the true calibre of a community faster than an unexpected tragedy and Saleem's accident was one of these. Saleem, a young lad of 14, was the eldest of his family with two younger sisters and a baby brother. His father is a soldier and so is away from home for months on end. School never held any attraction for Saleem in spite of his mother's encouragement when he did go and dire threats from her when he didn't! His real soft spot was for animals and any injured stray dog, cat or bird would be rescued and carefully tended by him.

One day he was playing truant from school and went in search of thrills and excitement with his friends. Jumping from moving freight wagon to freight wagon in the local railway yard, he slipped and fell. When he woke up he discovered he had lost his left leg below the knee. His father came home to help pull him through a difﬁcult few weeks, while neighbours and friends rallied around his mother and the rest of the family helping them out in every way they could. Saleem eventually returned home on crutches.

Through my work with a community-based rehabilitation centre I was able to put Saleem in touch with a newly qualiﬁed young man who made a modern lightweight artiﬁcial limb for him. He was a member of Focolare, an active and dynamic Christian group, and had a wonderful inﬂuence on Saleem who slowly began dropping his street language and manner. These days Saleem is attending morning classes organised for school drop-outs. We hope that, in time, he will be able to sit his High School matriculation. He works hard to achieve this goal. The family, though very poor, is contributing $10.00 a month to the rehabilitation centre as their way of saying thanks.

Another member of the community, Shumaila, has suffered from asthma from childhood. Now in her early twenties she is subject to frightening attacks of breathlessness and depends on an inhaler for relief. The hot, dusty climate of Sindh greatly aggravates her condition. On several occasions she has required emergency hospitalisation where things were touch and go. Her mother is a widow living with cancer; the family's scanty resources are forever stretched to the limit.

It is in situations like this that we are able to help out and tide people over the crisis they face thanks to the goodness of others who make our work possible. This generosity, coming from the heart and reaching out to people on the margins, brings hope to many. "Some sow, others water, but it is God who gives the increase" (1 Cor. 3:7).

Sr Roberta Ryan from Ireland trained as a nurse before joining the Columban Sisters. Her first mission assignment was in Korea where she spent nearly twenty years. She has since spent many years in Pakistan.

Listen to "Acts of friendship in unlikely places"