Goodbye to a faithful Catechist 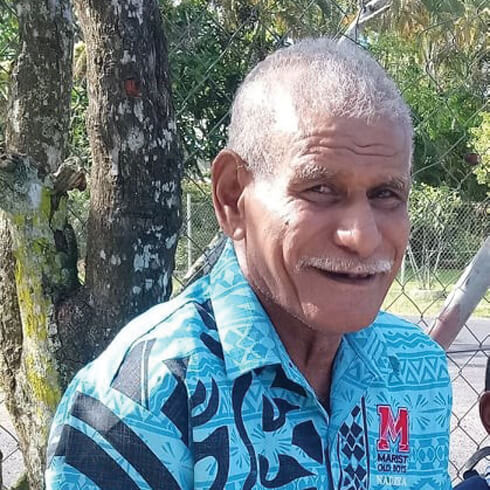 As a young priest I was appointed in 1975 to the island of Kadavu, which is about 60 miles from Suva, the capital of Fiji.

For many years the parishioners of Kadavu had not been well served. There were not enough priests and they were visited only once in a while. Fortunately at that time, there was an important move made nation-wide to increase the number of catechists who could lead the various Catholic communities throughout Fiji.

For Kadavu, one of these was Karolo Naituki. He was a new catechist and I was a new and young parish priest. We got on very well and were mutually supportive of each other.

Kadavu was a strange parish to cut one’s teeth on. There were only about 200 Catholics, and since I had other assignments, and travel was more difficult in those days, I followed the practice of previous parish priests by living in Suva and travelling to Kadavu occasionally. The parishioners were full of faith and I would have loved to do more, but it did not seem possible.

I well remember being informed that an elderly woman of the parish, in the village of Vabea, was dying and wanted me to visit her. I replied apologetically that there was no way I could go for at least another three weeks. The response came, “That’s alright, Father, she’ll wait for you.” I managed to get down to Vabea a bit earlier than originally planned, and went straight to the old lady to attend to her. Later that evening, we had Mass and I took her Holy Communion afterward.

There was a small welcome for me in the village, including some kava-drinking of course. I retired for the night, only to be woken by a loud knock on the door at midnight, with the message that the old lady had passed away. Having waited all that time for the Sacraments, she was spiritually prepared and happy and had immediately given her soul to the Lord.

I did enjoy ministering to such people of faith. Sadly, my ministrations came to an abrupt end when I was ‘kicked upstairs’, as they say, to administration work in Ireland. Still, the people were in Karolo’s loyal and faithful hands, and other priests came occasionally to visit.

Then tragedy struck. In March 1979, Hurricane Meli hit Fiji, ravaging Kadavu worst of all. It was customary for the women and children to shelter during hurricanes in the church because of its thick concrete walls. Unfortunately, the wind was so strong that the walls caved in and the church came down, killing 22 people, including Karolo’s pregnant wife and four boys. Fortunately, his two daughters were in a different spot and survived.

In spite of this calamity, Karolo’s faith never wavered and he continued serving his community faithfully over the years.

Although never re-assigned to Kadavu, I did get to visit occasionally, and had several very happy sessions with Karolo and also when he visited the mainland.

Last August there was at a big celebration in Suva. I spied him in the crowd and I think he was quite chuffed that I recognized him. We embraced. He was the same old Karolo, gaunt but tall and cheery. I was therefore very much taken by surprise and dismayed to hear three months later that he had died in the hospital in Kadavu after a short illness. I hadn’t even known he was sick. In spite of the difficulties involved I felt I had to go down for the funeral.

Three priests and a number of relatives decided to make the journey from Suva. We departed an hour before midnight on a Tuesday night ferry service and arrived at 6.30am in the morning at the largest settlement and Government centre on Kadavu called Vunisea. From there it was a one hour 50 minute ride in an open fibre-glass boat to Vabea, Karolo’s village, and the place of the funeral. Normally there would be no problem, but as we set off, the gentle rain that had been falling turned into a full-scale storm. The waves increased in size, and we found ourselves in lashing rain accompanied by lightning and thunder, with visibility at times as low as 20 metres.

The four boats necessary to accommodate us all including one carrying the coffin which we had picked up from Vunisea hospital battled against the elements, their prows rising into the air, then crashing down into the next wave as we moved forward. This continual crashing was hard on the body and we occasionally fell off our plank seats. It was definitely the most difficult voyage of my life and one wondered whether it would ever end. But thank God we all made it even though the worse for wear. The boatmen were very experienced, but even they had never been in such bad conditions before.

It had been the intention to travel in convoy, but the conditions meant the four boats got separated. The boat I was in arrived first, but our bags were in a different boat, so we waited in our sodden clothes till that boat arrived and we could change. We were rather anxious about one boat that had some children in it and which we lost sight of early on. However, it too eventually showed up. 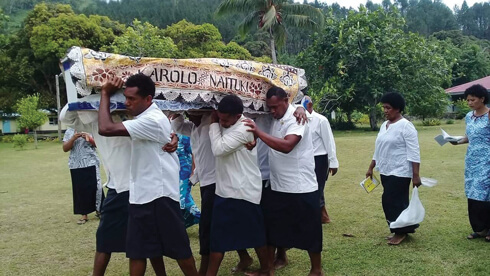 Once everyone had arrived, preparations for the funeral did not take long. After quick refreshments, we three priests conducted the funeral Mass and burial rites. Karolo was buried in a grave on a hill overlooking the village. There were some formal ceremonies after the funeral, together with the drinking of kava. I have rarely heard more inspiring speeches and outpouring of sincere sentiment. Karolo, who had served that community so faithfully for almost 50 years, certainly received a fitting farewell.

Most of those who had come down were to stay on for a few days, but four of us had to return to Viti Levu that same day. So off we went. This time the trip was easy and routine, and we arrived back in Suva just 24 hours after leaving it.

None of us will ever forget the journey. Although it was so difficult, we had joy in our hearts that everything was carried out appropriately. It was also great for me to meet up again with some of my former acquaintances.

I am unlikely ever to go down to Vabea again, but it was an extraordinary way to say “Goodbye” to my former parish and to my dear friend, Karolo.

After all Karolo’s years of service, and after all those years of fruitful but spasmodic visits by various priests, the Archdiocese eventually decided, just months before his death, to assign not one, but two Vincentian priests to Kadavu. With this knowledge, Karolo would certainly have passed away with joy and peace.

Columban Fr David Arms has been a missionary in Fiji since 1975.