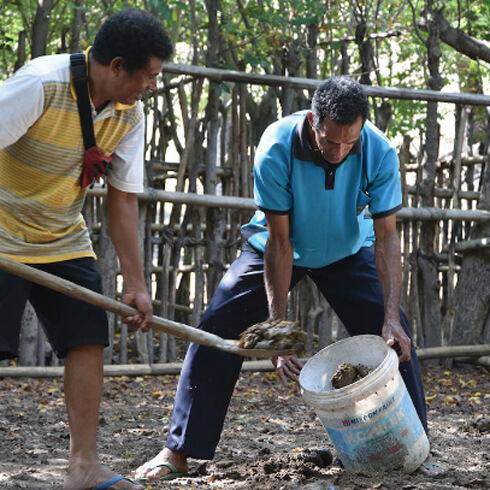 He found out about biogas in 2007 while serving as rector of St John Paul II Minor Seminary in Labuan Bajo in Indonesia’s predominantly Catholic East Nusa Tenggara province.

“A fellow priest from Java came to visit me and he told me about developing alternative energy by utilizing biogas, particularly for cooking,” he said. His interest aroused, Fr Robert began gathering more information on alternative energy from the internet and media reports.

He found that domestic bio digesters were simple devices that make small but valuable quantities of biogas through the decomposition of organic waste. When organic matter, such as food, human excrement and animal waste, break down in an anaerobic environment (an environment absent of oxygen), they release gases, primarily methane and carbon dioxide that can be used as an energy source.

“For one bio digester, we need at least four pigs,” he said, adding that most lay Catholics from all 86 parishes in the diocese raise animals like pigs, cows, buffaloes, goats and horses, which give them the means to produce biogas.

Since being elected chairman of the diocese’s Socio-Economic Development Commission in January this year,
Fr Pelita has installed bio digesters in the diocese’s gardens. Requests from parishes, religious congregations and lay Catholics followed, asking for help to develop biogas sourced from animal waste at their parishes and residences.

The next step was to train biogas trainers in biogas production in cooperation with other Diocesan Commissions. The training bore fruit with at least three biodigesters being successfully constructed and installed in parishes in April and May. “In the near future, biodigesters will be installed in all parishes,” Fr Pelita said.

Local church officials say what the priest has done so far has closely followed the diocese’s mission, which is to preserve the environment. “Biogas production can reduce dependence on firewood, kerosene and natural gas for household use among about 700,000 Catholics in this diocese,” said Fr Chen, who added that those already producing biogas are saving a great deal of money in fuel costs.

“He presented the whole concept in a very interesting way. He didn’t only share with us the theory about biogas production but also showed us how to produce it,” he said. “We call him the biogas priest from Ruteng Diocese.”

That families, through their life of prayer and love, become ever more early “schools of true human growth”.