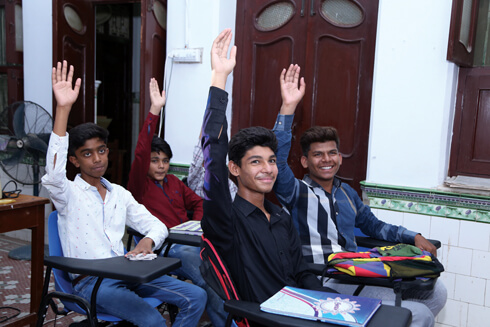 It was a happy day for me in May earlier this year when some of the first group of graduates from the Catholic Centre of Academic Excellence (CCAE) in Hyderabad volunteered to run a CCAE Summer School for the students who are enrolled there now.

I was in Hyderabad for a short time in May when Waqas Khokhar, Sarwar John and Amin Emmanuel came to see me to say that they, with other CCAE “Alumni”, as they proudly call themselves, wanted to show their gratitude for what CCAE had done for them. They wanted to give time and effort to plan a two-week CCAE Summer School with the CCAE Director and to conduct it themselves.

Since 2018, another of the Alumni, Issac Roy, had been gathering money every month from his companions in order to keep their promise to buy a new computer for CCAE every year. Their plan to conduct a CCAE Summer School was a further significant return we had been waiting for from these young Catholic men who had themselves freely received from CCAE so much for their personal growth, education and career development.

The Catholic Centre of Academic Excellence began in 2006 in response to the huge barrier of discrimination against young Christians in Hyderabad and to enable them to study at university level and to graduate and begin professional careers. The year-by-year success of approximately two hundred Alumni shows that CCAE has succeeded. They had studied medicine, pharmacy, dentistry, engineering, fine arts and accountancy and among them are teachers, nurses and healthcare workers, provincial Government employees, police, and members of the armed forces. Some have good positions in banks or in the hospitality industry. Five are in the seminary preparing to become priests.

The Alumni plan the dates of their marriages and the baptisms of their children according to the time that I return to Pakistan from Rome each year. Our hopes of developing a confident and committed young Catholic community in Hyderabad are being realized through the successes and the vibrant Catholic faith of the CCAE Alumni.

In 2006 I received a promise from the Columbans to support the newly-established Catholic Centre of Academic Excellence for two years while I developed other sources of support. Since 2008 CCAE has depended totally on the wonderful generosity of independent donors. The success of our Alumni is shared by the many donors whom the Alumni have never met but whose donations have enabled them to make so much of their lives.

Waqas Khokhar and Sarwar John are 26 years old. Waqas is married with one son, has finance degrees and is employed in the very competitive National Highway Police. He is also the Student Relations Officer at CCAE in his spare time. Sarwar is engaged, has an M.A. in English and works in an administrative position in a Government hospital. Amin Emmanuel is 27 years old, has a degree in Media Communications and has a teaching position.

Together they planned the recent CCAE Summer School and arranged its format and content based on their own experiences about what was needed when they were at CCAE. The students who are enrolled in CCAE had asked them to do something to help them fill in the days of their summer break. I think the students had more than a little self-interest in their request as the summer heat in Hyderabad hits 48 degrees every day and they know that there is air-conditioning at CCAE! 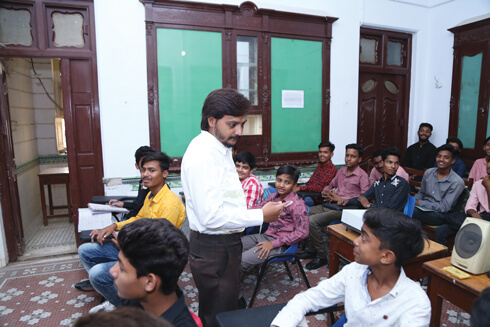 Thirty-five students attended the CCAE Summer School which is just on half of the regular CCAE enrollment.

The two weeks of the CCAE Summer School from June 10 -22 were conducted in a relaxed and participatory way and four topics were covered: English language skills (including spelling, vocabulary development, and reading), practical computer skills, manners and etiquette and Catholic faith instruction. Much of this was done with multi-media. The high point of the manners and etiquette segment was a splendid dinner at the Centre to give the students practical experience of using utensils and practicing table manners. They pleaded that the dinner be repeated every night to ensure they had really learned the table manners! Library, chess, table tennis and badminton sessions were also part of the daily programme and each day concluded with the praying of the Rosary.

Azeem Lazarus, the CCAE Director, was conducting the annual CCAE Summer School for diocesan seminarians in another part of the CCAE premises and was available for guidance as needed.

Although it put pressure on our finances this first CCAE Summer School was without doubt a great success and very worthwhile. The enthusiasm of the students and their happy and positive participation were obvious.

This very successful CCAE Summer School was a wonderful expression of the gratitude of the CCAE Alumni for what they had received from the CCAE themselves and their strong desire to freely pay back something for that. Many of them came back for several hours during the CCAE Summer School to share their success stories, to teach chess, to help in spelling and general knowledge sessions and to pray the Rosary with the students at the end of the day.

It is certainly gratifying to see this unexpected development and further benefit from the Catholic Centre of Academic Excellence. I hope that all of our benefactors who have supported this project can join with me in appreciating this news and rejoicing.

Columban Fr Robert McCulloch is the Procurator General for St Columbans Mission Society in Rome. He worked in Pakistan for over 34 years.

Listen to "Receiving and giving"