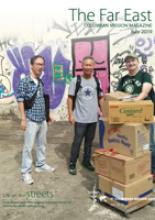 Life on the streets

He is only one of many who spends his nights sleeping rough in Hong Kong streets and parks, although his story is very different from most.
Read more

Five things that struck me in Pakistan

I have a strong sense of wanting to share some stories of the people of God in this amazing but challenging country of Pakistan. I cannot tell…
Read more

The priest of Bali Hai

The following morning was dark with smoke and for three hours the people used torches only to find that everything was covered in ash. Roofs…
Read more

Racism - a slip of the tongue?

Columban Fr Bobby Gilmore is concerned by recent incidents of casual racism and suggests there is a leadership deficit, nationally and internationally,…
Read more

My first significant learning was that being a Catholic is not just about going to Mass on Sunday and receiving the sacraments.
Read more

Crying out for survival

A pearl in the Orient

90 years of Columban Mission in the Philippines
Read more

Former editor of the Misyon magazine in the Philippines, Fr Sean Coyle explains why he believes lifelong readers of Columban magazines are in…
Read more