Expelled Columban back in Taiwan 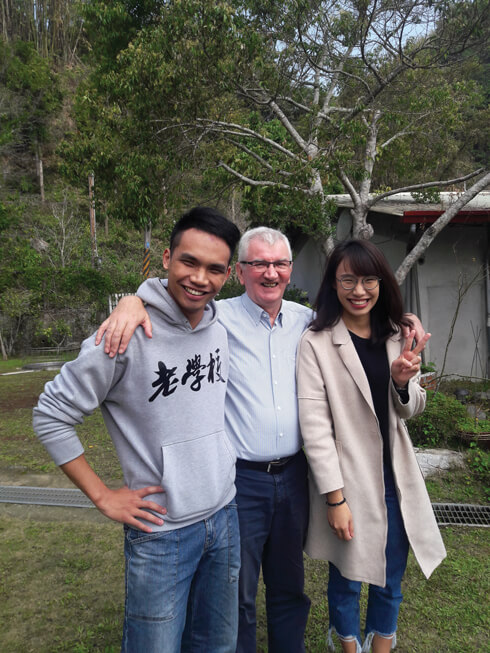 Returning to Taiwan in April this year, thirty years after being deported, I was deeply impressed with how the country has developed. I had spent ten years in Taiwan helping to educate factory workers about their rights and promoting a safe working environment in factories where so many young workers were seriously injured. That was the time of martial law and Taiwan was a police state. The country had been under martial law for more than 38 years which qualified as the longest imposition of martial law by a regime anywhere in the world at that time.

Due to the sacrifices, brutal deaths, imprisonment of political activists and the formation of the Democratic Progressive Party (DPP) in 1986, Taiwan has now become a democratic and highly developed country with an excellent health care system for all of its 23 million people. The first democratically elected president was Chen Sui-Bian from the DPP [2000-2008]

There are many aspects I would like to talk about but I will limit myself to Education and Religious Freedom.

Taiwan has been a centre for technical excellence for the past number of decades with consistently high standards in the fields of technology and the sciences. General standards of schooling are comparable with other developed nations in the region such as Japan and South Korea. Levels of literacy in the country have been calculated at 98.2% of citizens aged 15 and older. Around 95% of all students continue in some form of education, be it academic or vocational.

In 2016 Tsai Ing-Wen from the DPP was elected President and she has worked hard with her Vice President Chen Chien-jen, a Catholic, in building up the country and easing tensions between China and Taiwan. She is committed to working with like-minded partners on safeguarding freedom of religion and ending intolerance and persecution. In March at a large international gathering in Taipei she had the following to say: "Religious freedom is under threat around the world amid growing suppression of democracy and human rights and in the face of this challenge, 'Taiwan stands with those who suffer oppression at the hands of authoritarian regimes". No doubt it was a veiled reference to China.

Speaking at this same Forum she said "Freedom of religion is central to Taiwan's democratic way of life and as a melting pot of people, cultures and faiths, our nation is evidence that diversity and mutual acceptance bind and strengthen societies".

She also cited the increasing number of Muslims, Catholic and Hindu residents who have immigrated to Taiwan over the past several years and who, she noted, "Have enriched the nation with their culture, food and religions and demonstrated that anyone can contribute a chapter to the story of Taiwan".

Taiwan serves as an example of a religious free society for China. Religion is not a threat to governments.

In recent weeks China has been threatening to attack Taiwan and make it part of China. This was the big fear I heard from so many friends when I returned last month. China wants to make it a 'one country, two systems' but Taiwan doesn't want to be a second Hong Kong or Tibet. Tsai has been a trailblazer and well liked abroad for her reluctance to pick fights with China. However, some think Tsai, the first woman president in Taiwan, is not doing enough to ensure Taiwan's independence and so her former prime minister (Lai Ching Te) has declared he will challenge Tsai for the presidential nomination of the Democratic Progressive Party for the election in January 2020.

I was heartbroken when I was deported from Taiwan as I loved the people and the mission work was challenging. It took a long time to recover from that ordeal. But now I see God works in mysterious and wonderful ways. If I had not been deported I would not now have the privilege of working in Myanmar/Burma. I would still be in Taiwan.

Returning to Taiwan for a week has left a lasting impression on me. The welcome, hospitality and generosity was out of this world and I had the opportunity to meet many old friends, people I had worked with and some who spent years in prison for their commitment to making Taiwan a democratic country. They gave me almost US $7000 for my Higher Education Centre (HEC) in Myanmar. They said it was a token of appreciation for what I did for Taiwan's people more than 30 years ago.

There were so many highlights but the big one was meeting the Vice President at the Presidential Palace at his request for lunch. Even though he and I were the only two Catholics among the 20 friends, he started by making an apology to me for the way the previous government had treated me 30 years ago. Before lunch he said a prayer for all of us, for the poor in the world, for God's creation and for mother earth that produces the food. After a two hour lunch and photographs it was time to go and he asked me to give him a blessing. He is a man who attends daily morning Mass. He is not afraid to openly show his faith. What a blessing in our politically correct world today!

Columban Fr Neil Magill has worked in Korea, Taiwan and on the General Council in Ireland and now works in Myanmar.