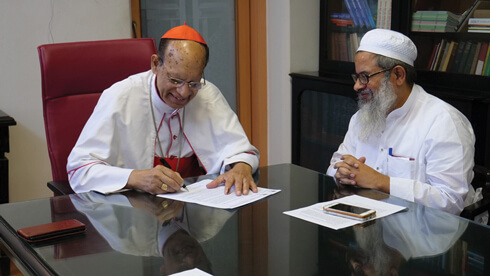 The Cardinal (left) and the Maulana. Photo: Matters India - mattersindia.com

A joint statement from Christian and Muslim leaders reads: "As Sri Lanka is a country very close to us, together we intend to offer practical help to allow the victims of the Easter attacks to overcome the unprecedented crisis that has devastated their lives.

We are sending a high-level inter-religious delegation, composed of members of our faith communities to explore the possibilities of cooperation and to offer our sincere condolences to the people of Sri Lanka.”

Christians and Muslims in India together express shock and unequivocal condemnation of the barbarous attacks in Sri Lanka, reads the statement. "The people and groups responsible for the massacres are against humanity, against civilization and against God. They are the embodiment of the most atrocious forces on earth", the two religious leaders affirmed in the statement.

"Associating terrorists with any faith is a sacrilegious act", the two say, urging the followers of all religions to "deny and condemn these barbarous individuals and groups", and inviting the government to ban them from society.

The message points out that "terrorist attacks become more gruesome if executed under the pretext of religious faith: in addition to causing the loss of innocent lives, they destroy peace and harmony". It is the duty of all religious leaders to stand up and use all our resources to repudiate this evil from society, the leaders repeated. For this reason, they continued, "it is necessary to remain close to our Christian brothers and sisters to share their sorrows and express our solidarity with them".

The two religious leaders asked the government and the police "to be more vigilant and to take precautionary measures that prevent terrorist groups from devastating civil society", expressing our determination to continue our fight against terrorism, for global peace, and inviting all citizens, of any faith, "to collaborate with their personal efforts".

The statement concluded by appealing to "all people of good will, regardless of religion, caste or creed, to work to save humanity and maintain social harmony and peace".

The joint declaration was signed by Cardinal Oswald Gracias. Archbishop of Bombay and President of the Indian Bishops' Conference (CBCI), and of Maulana Mahmood A. Madani, Secretary General of "Jamiat Ulama-I-Hind", the Council of Muslim theologians in India.

Sri Lanka is a multi-ethnic nation of 22 million inhabitants that are mostly Buddhists but include minorities: Christians, Muslims and Hindus.

India is a nation of 1.3 billion inhabitants of which 80% are Hindus, about 14% Muslims while Christians represent 2.5%.

That priests, through the modesty and humility of their lives, commit themselves actively to a solidarity with those who are most poor..