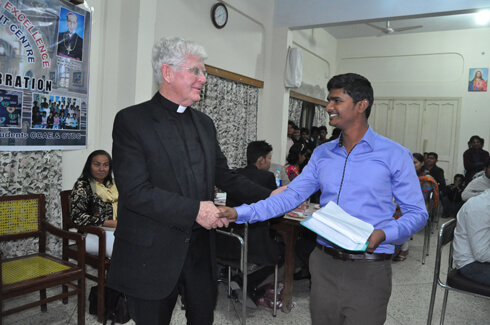 Like many Pakistani men who struggle to gain an education, the future looked bleak for Shoaib Ilyas – until he discovered the Catholic Centre of Academic Excellence (CCAE) in Hyderabad, Pakistan, and his horizons widened.

The facility began offering educational classes in 2007 in collaboration with the Society of St. Vincent de Paul, in the second-largest city in Sindh province.

Now Ilyas has a diploma in associate engineering under his belt and has math, English and Urdu.

“I’m so grateful to my teachers at the CCAE for helping me to overcome my weaknesses,” he told Ucanews. “The extra effort that the teaching staff put in, and their motivational input, encouraged me not to give up.”

He later decided to become a seminarian and is now training for the priesthood in Hyderabad Diocese.

“The coaching we provide is very intensive. English is also a high priority and we upgraded our computer centre last year to give them the tools they need.”

He said anti-Christian discrimination and poverty were the two main obstacles the Centre was “fighting to overcome.”

“We want our students to be able to live and work effectively in Pakistan’s multicultural and multi-religious society. Their success over the past decade shows we’re on the right track. Their results have far exceeded our expectations,” said Fr McCulloch.

Most attend a regular state-run school or college in the morning and head to the CCAE for four hours each afternoon.

Fr McCulloch set the facility up with a clique of Catholic professionals, not only to give young people a future but also to lay a stronger foundation for the church in Pakistan.

“We started with a great idea but no funds. We had a core team of teachers and just 13 students in the early days. Many of them weren’t quite sure what they were getting themselves into.”

However, the project has proved to be a roaring success. Some of the graduates have joined the priesthood, some have gone on to establish careers in the armed forces, and others now have well-paid jobs.

Based on the early success of the CCAE, Fr McCulloch and his team launched the Catholic Youth Development Centre (CYDC) as an offshoot of the facility in 2008. It started as a morning program but quickly expanded. 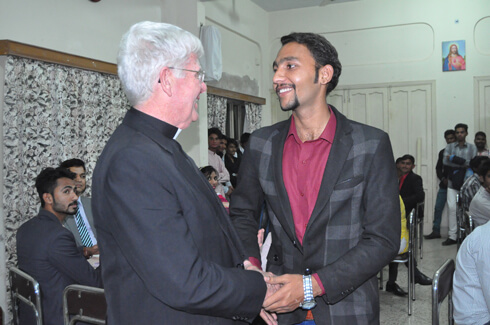 The CYDC provides an accelerated learning program for young male Catholics. Many are illiterate when they arrive, having dropped out of school at a young age.

In just two years, however, they cover the complete government syllabus for primary and high school education. After that, they are sent to technical institutes to further hone their skills in their chosen vocation or profession.

“Many have a cultural responsibility to leave school early and start providing for their families, for example by raising money for a dowry so that their sisters can marry. Life for them is a long dark tunnel with little light for hope.”

The CYDC enrols about 60 students a year and now has more than 50 of its graduates working in professions ranging from hospitality to healthcare.

Junaid Christopher, 25, is one of the program’s success stories.

“I was lucky I got the opportunity to enrol,” he told Ucanews.com. “It allowed me to dream big and build myself up, personally and professionally. Apart from the academic stuff, I learned about ethics, etiquette and what it means to have a professional attitude in life.”

Christopher used to have a menial bank job but now runs his own educational Centre in Karachi and is studying for a degree in chartered accountancy.

“I always remember the core values I learned at the CYDC when I teach my students, who are mostly poor and require a lot of guidance,” he said.

Fr McCulloch said religious and moral formation play a key role in the work done at the CCAE. The students are encouraged to pray, work on skills like public speaking and debating, and develop an interest in art, for example learning a traditional Pakistani musical instrument.

After they complete two years of studies, they spend a month attending a Christian faith formation course at a pastoral institute in Punjab’s Multan district.

“Young Christian Pakistanis grow up confronted by discrimination. The students and graduates of CCAE and CYDC have been able to overcome and move confidently beyond these barriers” Fr McCulloch said.

As the facility doesn’t charge its students any fees, it relies on the financial support of the Society of St. Vincent de Paul and other benefactors, operating on little more than $42,000AUD a year.

Naseem Akram said he owes his life to the CYDC. A high-school dropout, he now runs his own auto-repair shop after the program showed him what he was capable of.

“Before I went there, I had no hope,” he said. “I want to thank Fr McCulloch for giving me another chance at life.”

Listen to "A game-changer"