Columban Fr Chris Saenz writes about the polarisation of American society over the issue of immigration and wonders how his grandfather, an illegal migrant from Mexico, would have fared today. 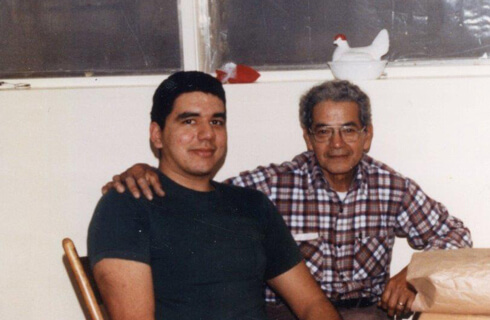 Fr Chris Saenz as a young student with his grandfather Augustine (Auggie) Ramirez prior to his death in 2011 aged 96. Photo: Fr Chris Saenz SSC

When I was ordained in the year 2000 I envisioned myself serving on the foreign missions for my entire life eventually dying "with my boots on." However, last year I found myself returning home after 17 years in Chile, South America. It was hard to leave a land and people that I had come to consider as my own. Yet, a sense of urgency came over me as I entered into my home mission.

I was confronted by a nation that had completely changed since I left it in 2000. The social and political climate has become much polarised. One of the central issues of the polarisation is immigration. I found myself looking to the past and finding guidance from my deceased grandfather, Augustine Ramirez. Auggie, as many called him, was born in Leon in Mexico and came to the USA illegally when he was an adolescent. He was a migrant worker for many years. Eventually, he settled in Topeka, Kansas, where he became a city bus driver. There he married my grandmother Maria de Jesus (Jesse) and began a family. In time, he began his own janitorial business and worked in it until he was 92. He passed away in January 2011 at the age of 96.

At his funeral an elderly gentleman, Billy Gomez, came forward to tell me a story about riding my grandfather's bus route to and from school as a young boy. One day Billy was very sick and on the way home he lost consciousness. When he woke up, Billy was at the front door of his house. My grandfather, breaking city regulations and risking being fired, had driven off his bus route several blocks on the side streets to deliver Billy into the arms of his mother. It was similar to Jesus healing the crippled man on the Sabbath, violating the Sabbath laws (Matthew 12: 10-15). Like Jesus, my grandfather believed compassion was not limited by law.

Today, my grandfather's experience would describe the reality of the many DACA (Deferred Action for Childhood Arrivals) "dreamers" living in the USA. Although blessed with a long and healthy life, for many years he lived in fear of being deported. He had come to consider the United States his home.

He was an avid Kansas State Wildcat football fan and wore the purple and grey (Kansas State's colours) with pride. He paid taxes and social security for decades knowing that as an illegal he would never receive those benefits. What terrified him most was the possibility of being separated from his family.

Therefore, after being more than 60 years in the country and having sufficiently comfortable economic circumstances to allow him to pay for the naturalisation process, my grandfather took the first steps to become a US citizen. Finally, in 1994 at the age of 80 he was sworn in as a US citizen.

Given my grandfather's legacy and the biblical imperative to welcome the stranger and foreigner (Exodus 22: 21; Deuteronomy 10: 19; Matthew 25: 31-46), I felt compelled to direct my pastoral efforts in my home mission to accompany our brothers and sisters from other lands.

Currently, I visit Hispanics in a local jail who have been detained by ICE (Immigration and Customs Enforcement) for illegal entry into the USA. Many had escaped violent and difficult economic situations looking for a better life for themselves and their families.

One such example is Juan from Guatemala. Juan had witnessed his grandmother murdered by gangs as a young adolescent. The gangs tried to recruit him; "join or die" was the motto. Having no family left in Guatemala and no security, Juan left his home country to join his family in the USA where he found work in restaurants and construction. He committed no crime. But one day, while driving, Juan's tyre went flat which resulted in him having a minor car accident. The police asked for documentation and, not having any, Juan was detained. He pleaded for asylum but, unfortunately, was deported back to Guatemala. I don't know what happened to Juan, but I always pray for his safety.

Juan's story is like many others I have heard. I can't ignore their plight. Bringing compassion to a difficult situation is my grandfather's legacy, and a Columban priority.

Columban Fr Chris Saenz is from Bellevue, Nebraska in the US. After many years in Chile he returned to the US in 2017 and was assigned to the Columban Hispanic Ministry.

Listen to "A grandfather's legacy"