The challenges of a translator

I could scarcely believe my eyes when I opened the curtains to see that we had an unexpected heavy snowfall during the night. I had promised Columban Fr Yang to act as translator for the Irish Ambassador and the Chilean Consul at the Columban Centenary Mass in Myungdong Cathedral and wondered if I could make it there. 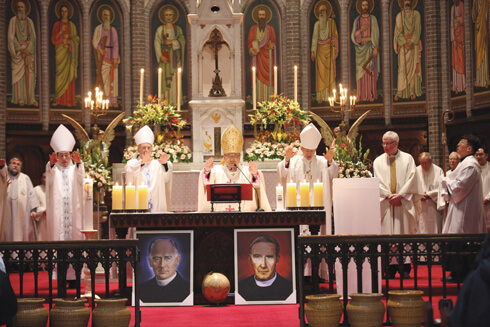 As I live under Mt Surak I was worried that the mountain road might be impassable. Luckily a thaw set in before noon and the bus that would take me to the nearest subway station was able to climb the steep hills. When I got to the Cathedral I saw several Columban priests dressed in an array of headgear as they tried to stay warm in the bitter cold. Scattered around the grounds of the Cathedral were Columban priests, sisters and lay missionaries chatting with the many faithful that had come to partake in the Centenary celebrations. Members of the Columban supporters group were busy welcoming the people and distributing the Centenary Mass leaflets. I was immediately escorted to the front seat by two of them and shown where the Ambassador and Consul would be seated.

When Julian Clare, the Irish Ambassador, finally arrived accompanied by a woman, I led them to the front seat that had been reserved for them. I knew Julian, having translated for him at the funeral of Columban Fr PJ McGlinchey, but, as this was my first time meeting the Chilean Consul, I introduced myself to her and having asked her where in Chile did she come from I was surprised to hear that she came from Galway. She was not the Chilean Consul but rather Fionula, the wife of the Irish Ambassador. I was later to hear that the Chilean Consul felt that she was not properly dressed for this formal occasion and choose to take a seat at the back of the church.

I experienced my first difficulty in my role as translator when a lay missionary from the Philippines read the First Reading in her native Cebuano and a Korean lay missionary, returned from China, read the Second Reading in Chinese. Fortunately I had asked Fr Yang what readings they intended using for the Centenary Mass and after an initial setback I was able to translate both readings for the Ambassador as I had a copy of them in my possession. A translator has to be prepared for every eventuality!

I had no such difficulties in translating the homily of Andrew Cardinal Yeom Soo-jung who was expansive in his praise of the Columban Missionaries for all that they contributed to his Archdiocese of Seoul, to the Korean church and to Korean society.

He described how Columbans had built their first parish in Donam-dong and continued to build some thirty two more in Seoul Diocese. He appeared to be eternally grateful for the way the Columbans, having built up communities in areas of great need and as soon as they were fully established parishes, handed over the running of them to the diocese. They had behaved according to that old missionary maxim of the role of missionaries which was to “begin”, “beget” and “be gone”. In all, one hundred Columban priests worked in Seoul Archdiocese with Fr Bob Brennan still serving in a special parish there.

The Cardinal next listed many “specialist” ministries whereby Columban missionaries had contributed greatly not only to the Catholic Church but to Korean society. I found it difficult to keep translating as he reeled off so many different ways Columban Missionaries had contributed to the growth of the Korean church. He thanked them for their contributions to programs for university students, for their ministry to young workers, their involvement with Choice, Marriage Encounter and Retrouvaille.

By founding Alcoholics and Gamblers Anonymous in Korea Columban Missionaries had helped thousands of Koreans. Columbans had been to the fore in working for justice and peace, in dialoguing with other religions, and promoting preservation of the environment. I was surprised, when talking about the Columban commitment to the urban poor, he actually singled out the Columban ministry in Shillim-dong. I remembered that he as a parish priest had actually visited the area along with a number of his parishioners who were involved in a 'meals on heels' program. The steep hills and extra narrow alley forced the participants in this program to abandon their wheels and take to walking when delivering hot meals to shut-in people in the area.

Another Korean priest that showed remarkable interest in the work being done for the urban poor by Columbans was Fr Kang Woo-il, the present bishop of Jeju. He was given a few months pastoral experience in the neighboring parish when he was “in danger” of being appointed bishop in Seoul.

Cardinal Yeom thanked the Columbans for helping the Korean church to become more missionary in its outlook, mentioning the decision to accept Korean seminarians, the establishment of the Lay Mission Programme as well as the Associate Priests Programme.

For a Communion reflection, the letter written by Bishop Galvin on April 20, 1927 at a time of major upheaval asking his priests to remain with their people in China, was read. Some of the one thousand people in the cathedral were moved to tears on hearing the bishop’s fervent plea to his priests not to abandon their flock no matter what the personal cost might be.

Around 600 people were given a sit down meal as well as the customary souvenir towel. Some 60 priests as well as the Papal Nuncio and the auxiliary bishops of Seoul and Suwon diocese concelebrated the thanksgiving Mass.

Portraits of the founders as well as a globe and a copy of the Columban Constitutions were brought to the altar at the Offertory. Fionula expressed surprise at the fact that most of the women attending were wearing mantillas and that everyone processed to the altar for the Offertory collection!

What a wonderful celebration it was and a great privilege for me to participate as a translator.

Noel Mackey is a former Columban and a resident of Seoul.

Listen to "The challenges of a translator."