The Princess of Paradise 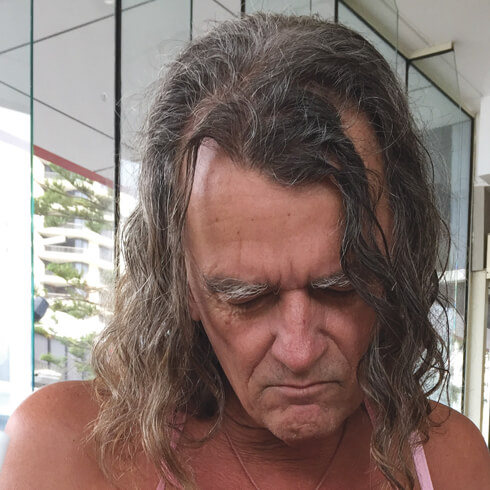 I want to tell you about my friend David. Mind you he prefers to be called Princess. He is known as the Princess of Paradise.

Since I arrived on the Gold Coast a little over two years ago I usually rise before 5 am and go for a walk along the beach. During these early morning excursions I often passed the Princess of Paradise sitting there on his bench. As time went by we would exchange a few words and then as more time went by I would sit with him and give him a few coins to go into the 7-Eleven and buy both of us a coffee and him a muffin.

David is a cross-dresser and is well known on Cavill Avenue. He has sat there for years. He used to live opposite above a Karaoke Bar, but late last year he was given notice to leave. He had been in this same place for six years, meticulously paying his rent.

David has schizophrenia according to doctors who examined him. By his own story he asked does that mean “I am mad?" They answered that “we don’t use that term any more”. He sits at Surfers Paradise and waits for Kylie Minogue to turn up and marry him. He has done it for over a decade.

I was able to get David to visit the St Vincent de Paul Cornerstone Program which deals in housing for people in difficulties. I had the intention of following this case through, not just for friendship sake, but in order to see how the housing for the homeless system works.

David was willing to have me talk to the people at the karaoke place where he lives about the termination. The plot thickened a bit when he told me that the reason they were shafting him was that they didn’t like him wearing women’s clothing. This sounded like a case of discrimination as he had lived, faithfully paying his rent, in the same place for so long.

After that I arranged through the St Vincent de Paul for David to meet with some free legal aid to prepare papers for a stay of execution on his ejection from the property. I mentioned to David that he could perhaps wear something more helpful for that meeting. When it is cold he had trousers on under his wee skirt. He said it might be hot and I suggested he could suffer a little like the rest of us. He listened but I am not sure if we were singing off the same hymn sheet. He is ruled by the “voice – God” as he repeats endlessly.

I explained to him that as far as I could see he would finish up on the streets, which he had previously told me he didn’t want to do. He now seemed resigned to this as a distinct possibility. He was talking about cubby houses for keeping out of the wind and rain. He has done it before. 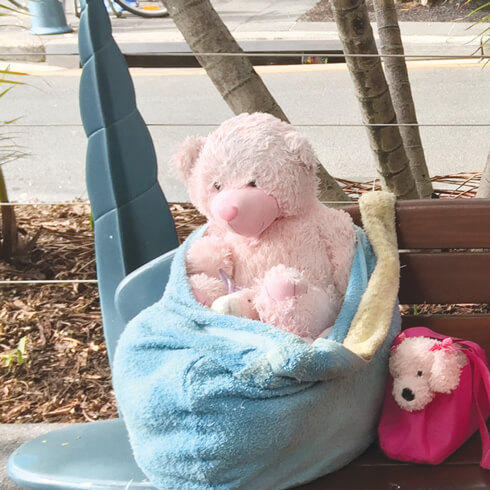 David's stuffed "babies" which  he carries around with him. Photos: Fr Warren Kinne SSC

I asked “what about your stuff?” He said he was thinking about storage and then he got into a discourse about his three large stuffed toys to which he has given names. They are his children. He couldn’t store those. Anyway, he knows that he cannot drag all his gear around the streets.

I doubt that I am ever able to overcome the power of the voice even though I risked telling him that as a man of God, I doubted that the voice was God. He wasn’t perturbed about that but just said in so many words that he would need to follow its capricious whims.

He doesn’t really understand the court procedures and the dates on bits of paper and what it all meant. I explained that as far as I understood it was looking for a way to help him to stay where he was until we got something else sorted out. Then abruptly he asked me to tell them to withdraw the court submission.

In the end the voice undermined our efforts to keep him off the streets. I could only help him to find a safe storage place for his goods and chattels. He had his three "babies" with him in baskets when we went to the storage place – Sunshine a big bear and another two smaller stuffed toys. He maternally took these out of the sunshine in the car when we went into the office to sign the forms.

I had him sign the papers at the storage place and then drove and left him on Cavill Avenue. He has now been there for over two months sleeping in a door-way on a blanket. He has money in the bank but the voice says he needs to await the imminent arrival of the said Kylie.

I broached the subject of the "voices" and asked would he like help with those. He said he didn't want any "mental health" intervention. Perhaps he finds comfort in the voices. So he is in the hands of the voice/God.

Since that time just before Christmas, I have met David a few times for breakfast in Surfers Paradise McDonalds. We dine there in the early morning. He has his stuffed “babies” with him in a bag and he tends them with care. He is quite talkative and awaiting the imminent arrival of Kylie Minogue who is travelling to Australia for Mardi Gras. This could be the big moment.

Columban Fr Warren Kinne served nearly 20 years as a missionary in Shanghai, China and now lives on the Gold Coast, working in parishes and as a chaplain to students at Griffith University.

Listen to "The Princess of Paradise"