No room for complacency

A young Columban, Fr Taaremon Mataue, tells us about the ‘ups and downs’ and surprises of parish life in Taiwan. 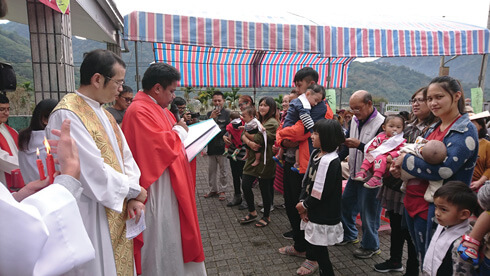 It was a Sunday morning. I was turning the pages of my Mandarin Chinese prayer book looking for suitable prayers for the dead. I was in one of the eight villages of our parish in the Dabaijian mountains in Taiwan.

I had already said Mass in a nearby village. There I received a message that the parish catechist’s mother had been taken to hospital that morning and had been pronounced dead from cancer. I was asked to come to the catechist’s village after Mass so that I could meet and pray for the old lady there.

I didn’t wait for a meal with the villagers after Mass but drove straight to the catechist’s village. A short time later, while I was still trying to prepare, the ambulance arrived. The old ladies in the village were crying as the body was carried into the house and laid on the bed. As I sprinkled the body with holy water and began the prayers for the dead the catechist’s mother opened her eyes and moved.

I was shocked. Everyone else was shocked too. “What prayer should I be saying now,” I thought, as I stopped the prayers for the dead.

“Something simple would be best” was my next thought as I tried to shift gears in Chinese.

I started the Our Father and the Hail Mary. The old ladies had stopped crying. I saw shock change into hope in the family members’ faces.

Someone thought of giving her water. The rest of the villagers continued saying the Rosary with me.

The old lady must have been in a coma. Still it was strange for the hospital authorities to declare her dead. She lived on for another week but then passed from this life.

The ups and downs of mission work

I know the catechist well. He is the only catechist in the parish. He gives instruction on the sacraments to the children. He visits the people. He also advises us priests about aspects of the culture and politics. We have to be careful with politicians offering money to the Church. We ensure that it is made as a donation to the Church and receipted accordingly so that we as priests cannot be accused of any wrong-doing.

Much of my work is ordinary parish work. I visit the homes and the sick in hospitals. I say Mass on Saturday evenings in one village and then in another village on Sunday mornings that people from nearby villages are expected to attend. Actually, I was very disappointed when I first arrived in the parish to see that only about 10 or 15 people, almost all women, were attending Mass. I contrasted this with the full churches and fine singing in Fiji.

At Christmas, all the 170 families from the eight villages come to the parish centre and celebrate the feast. They exchange gifts and after Mass, they spend the whole day together enjoying games and dancing. Each village also presents an item to the community as a whole.

Previously the priest used to go around knocking on peoples’ doors on Saturday reminding them to attend Mass the following day. But Father Larry, my Columban colleague, and I decided that people should come to church because they wanted to and not because of pressure from the priests.

I love the work

The women here are the backbone of the Church. I have some good friends among the more committed families. In one of the villages many of the women who became Catholic after marriage are fine singers.

I love to go there and play my guitar when they sing together after Mass or at a prayer meeting.

I like working in rural Taiwan. The culture is quite relaxed which is different from the busy lifestyle of people who live in the city. The people here live for the present. They greet you in a friendly way as you pass on the road. They are hospitable but I have to avoid becoming complacent and keep trying to approach the work with renewed enthusiasm and faith.

Listen to No room for complacency