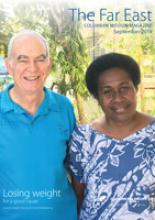 The September issue of The Far East magazine is tinged with sadness with the unexpected death of two Columbans from Australia and New Zealand.
Read more

I believe that priests are ordained to the sacrament of orders, the order of the Church. As priests, we should not take responsibility for everything.…
Read more

Columban Fr Michael Doohan is not a member of the English rock group! The Columban missionary set up a school for mechanics which has provided…
Read more

To mourners it is sometimes said, “Enough of grieving. Now you must let go and get on with life.” This advice, though well-meaning, is usually…
Read more

Losing weight for a good cause

Losing weight, having fun and fundraising do not normally go together. However, the Region of Fiji has made it work with a competition to raise…
Read more

A gentle man of faith and integrity

He was a gentle man who, with a lot of searching, found ways to follow his missionary calling. His recognition of the values and spirit of the…
Read more

The eyes of faith

An inspirational and sensitive man

The Federation of Catholic Students has been prominent in demanding permanent scrapping of an extradition law proposal.
Read more

From the Director - Giver of all life

Like all relationships our connection to God has ups and downs. There may be a slow beginning or a dramatic one. There may be times when God…
Read more

The changing face of Chile

Each tenant kept a bucket for their washing, a stove with a gas cylinder, some furniture and a few personal belongings in their rooms. These…
Read more

Blame it on The Far East

From Ireland, Mary Cawley writes about her decision to teach English in China after seeing an advertisement for AITECE’s (Association for International…
Read more

A chance for a better life

Subanen Crafters can look optimistically at a future for their families thanks to the support of Columban benefactors.
Read more