Losing weight for a good cause 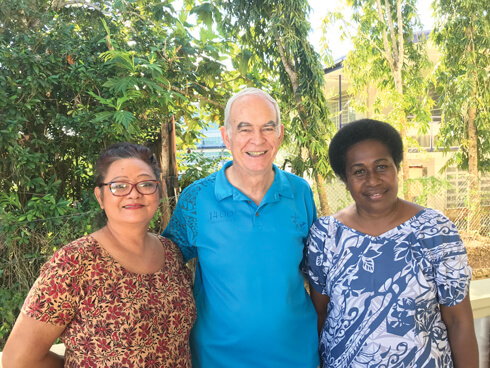 Fiji has the highest incidence of diabetes in the world. More than one third of the population suffer from it. It is a life style disease. Fijian men could afford to eat big meals of local root crops and vegetables in the past because they walked a lot and worked hard in their gardens. But nowadays most get transported around and live sedentary lives but eat processed foods as heartedly as before. Even Fijian women, 60% of whom are obese, have been making some doubtful choices recently. Some sell vegetables in the market to buy imported noodles from the supermarket. Others sold freshly caught fish to buy tinned fish from the store. Obesity and processed food are the big causes of diabetes in Fiji.

We, in our Columban Formation House, invited a doctor to speak to us about healthy eating at the beginning of the last two years. She highlighted the problem of diabetes in Fiji and the foods that contributed to the disease. She stressed the importance of not eating from 7.00pm to 7.00am each day and recommended occasional fasting and eating plenty of fruit and vegetables. We made changes to our shopping list, bought weighing scales and decided to give up eating meat for Lent.

I was chatting about these changes one night to Lillian, our Columban bursar and to Vitalina, a former Columban lay missionary. It occurred to me that organizing a Wellness team project would have many advantages. It would make participants aware of living more healthily by eating less and exercising more. Fijians love to compete in groups and participating in teams would keep up the motivation for healthy living.

It would be an excellent way to prepare for celebrating our Columban Companions in Mission’s silver anniversary of foundation in July. This association supports Columban mission in Fiji. Its members have promoted mission in churches and villages especially in October, the month of the missions. They have run catechetical camps in isolated places. They supported devastated communities traumatized by Cyclone Winston in 2016. The Columban Companions organize fundraising for Columban mission in their bi-annual gatherings. So it was decided that the proceeds of the Wellness team project would be earmarked for the support of young Pacifican Columban seminarians.

I shared the idea with Lillian and Vitalina and they added ideas about how to organize the project. Vitalina volunteered to lead the effort. She set up a Facebook page and was the one to whom the teams communicated their weekly weights and highlighted their weight-losing activities and efforts to attract sponsorship. The team registration fees, sponsorship money and donations were sent to Lillian, our regional bursar, and she kept account of the money raised. We contacted Fijian friends living in Fiji and overseas to invite them to participate.

Seventeen teams of 7 to 12 members in each team registered. There were teams in Melbourne, Tonga, Manila, England, as well as from a number of parishes in Fiji and from two Columban communities. Some teams organized Zumba sessions, others went walking in the early morning. People who could not participate sent in donations.

The Columban Companions in Mission silver anniversary of foundation was held on Saturday, July 6, 2019 in a local High School in Suva. It drew about 200 supporters. A professional band, whose members were related to Columbans, volunteered their services free. Their contribution to the Mass and later for dancing was much appreciated. There were a couple of talks on the history and aim of the Columban Companions in Mission.

The highlight of the celebration was the announcement of the winners of the Wellness competition for the group which had the highest average weight loss. We were delighted when the winners were a family from Tonga, calling themselves, “Forget me Nots” in memory of Losana Veehala, a former Columban lay missionary and dedicated supporter who died suddenly 18 months previously. This group won a cash prize (which they generously returned) and there were two other prizes awarded. However this was a competition in which everyone won just by their participation. I myself was delighted to lose 5kg in weight.

The project raised over F$12,000 ($8,500AUD). Everyone enjoyed the celebration and returned home enthused to be associated with the Fiji Columban Companions in Mission. The Columban seminarians in Suva will be well-nourished for the next year. We hope that they too will avoid obesity and diabetes.

Columban Fr Frank Hoare is Vice Director for the Region of Fiji and Student Formation educator.

Listen to "Losing weight for a good cause"