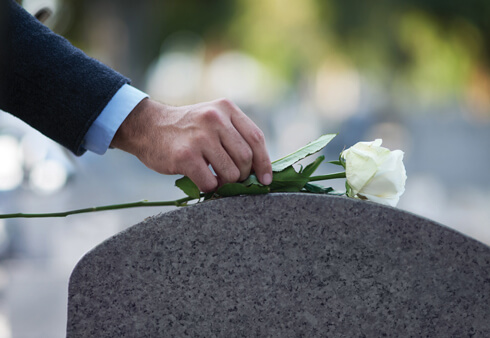 In my ministry as a priest I have encountered many experiences of grief and loss, and, like any other human being, I have had to deal with these difficult emotions both in myself and in others. Over the past 50 years since my ordination, I have learned a lot in this regard.

When I started my first missionary assignment, in Chile, I found it very difficult to face situations of mourning and grief. The Chilean people are usually very expressive, and my tendency was to tell them not to weep and cry. I also found that ceremonies such as funerals and anointings of grievously ill people took a great deal of my energy. However, a day came when, while on vacation at home in Ireland, I went to visit a cousin of mine in hospital who was very ill with lung cancer. I arrived at his room just as he was experiencing great pain and desperately struggling to breathe. Only his daughter was there with him and she was frantically trying to find a way to relieve his distress. She had called for a nurse, but the nurse had not yet arrived. I approached his bedside and gently spoke to him. I assured him that I was there with him in his pain and held his hand. Then, I soothingly told him to try to let go and let God take care of him. At first, he looked at me with terror in his eyes, but I kept reassuring him that he was in good hands. Then, I told him that I was going to give him the Sacrament of the Sick. When he heard this, the look of terror gradually gave way to a peaceful calmness, and he closed his eyes. I proceeded with the anointing, accompanied by his daughter and the nurse who had arrived by now. As I finished the prayers, he seemed completely relaxed, and then immediately died. His daughter was weeping copiously, of course, but I felt no urge to try to stop her. I stayed with her and let her cry as long as she needed to. I was aware of the change that had occurred in me. The resistance I used to feel previously was now transformed into a great sense of gratitude for the privilege I had been given to bring consolation to my two relatives.

This was my first breakthrough in dealing with grief and loss. Now I understood that these feelings must be allowed expression for as long as a person needs. I realized that the “don’t cry” I had spoken on many occasions in the past was not of much help to grieving persons, and that when I had used those words I had been expressing more my own discomfort with feelings of grief and loss than paying attention to the need of mourners to express them. The nub of the lesson was: You cannot take away the feelings; you can only help people to get through them by staying with them and listening to them for as long as they need.

This learning was deepened some years later at a funeral in Pakistan. I was accompanying people in the burial of a young teacher who had been hit by a train as he crossed the rail tracks. There was great grief and mourning. People went on weeping all through the burial ceremony, which included the digging of the grave, the prayers, the lining of the grave with bricks, the positioning of the body, the closing of the resting place with cement slabs and finally, the filling in of the grave. There were pauses at each stage to allow the mourners to express their grief in waves of weeping and keening and singing of psalms. So much time was passing that at one point I felt tired, so I whispered to the catechist that I was going to leave. He kindly whispered back that this whole mourning ritual was necessary for the people to relieve their grief and loss and that I should stay until it was completed. I very much appreciated his advice. It was a valuable reminder of the lesson I had previously learned from my cousin’s death and I have cherished it ever since.

From what had happened to me in the funeral I gained another insight. This was that in order to remain with people in their grief and loss, an essential element would be required, namely, patience. A patient attitude would be necessary both for myself and for the person or persons grieving. I set out to develop this quality in myself, and discovered that it was easier than I had thought. I found that I could listen attentively to people and let them repeat over and over again whatever they were going through. I could see the positive results of my patient listening as grieving people shared their memories, both happy and sad, and their feelings such as sorrow, regret, hurt, anger, guilt, love, and so on. The repeated sharing of all these things helped greatly to gradually lift the weight of their grief and loss. As I listened to them, I would often suggest that they also share their feelings with God and with their deceased loved ones, and I found that this helped them to find even more healing. Many could feel God’s closeness to them in their suffering, and their loved ones seemed present in a different but real and comforting way.

Another thing I learned in dealing with grief and loss is that it cannot be rushed. To mourners it is sometimes said, “Enough of grieving. Now you must let go and get on with life.” This advice, though well-meaning, is usually not helpful.

No time limit ought to be put on dealing with grief and loss. Letting go cannot be forced. It has to happen when the person grieving is ready, and only he or she will know when that time is. In the meantime, feelings of grief and loss will come in cycles, and each time they do, they must be accepted and entered into as often as needed until they subside. In this way the cycles will gradually take place less often and with less intensity until the person finds peace. Trust in the process of healing, and patience to let it happen, will be required, and having such trust and patience will produce the best results in the end.

To conclude this article, there is one more insight I would like to add. It has to do with the process of healing I mentioned at the end of the last paragraph. I have found it very helpful to recognize three steps or stages in this process. These are, letting go, letting be, and letting begin. First of all, the mourner has to ‘let go’ of the person who has died, though not the memory of him or her, through which he or she can still be sensed as present but in a different way. This is perhaps something similar to what happened between Jesus and Mary Magdalen after his resurrection when he said to her, “Do not cling to me, for I have not yet ascended to the Father...” Secondly, the grieving person has to ‘let be’ the feelings of grief related to the loss of the loved one and express them as often and as fully as is needed. And thirdly, he or she has to ‘let begin’ a new life and happiness at the appropriate time, and not force themselves to do so before they are ready to take that step. These stages will not take place in an orderly, progressive fashion, but a person will move back and forth randomly between them as the healing process advances. Once again, time, trust, patience and sharing will be required to let the process proceed.

Finally, I would suggest that much of what I have described in this article is relevant, not only to the process of dealing with grief and loss, but also to any transition in our lives. My own experience as a missionary confirms this, for in whatever country I was sent to minister in, adaptation to culture, climate and religion required that I pass through the same stages of letting go, letting be, and letting begin, and also involved the same qualities of time, trust, sharing and especially patience, more patience, and still more patience.

Columban Fr Joe Joyce has spent most of his missionary life in Pakistan and is the Intercultural facilitator.

Listen to "Reflection - Dealing with grief and loss"