The changing face of Chile 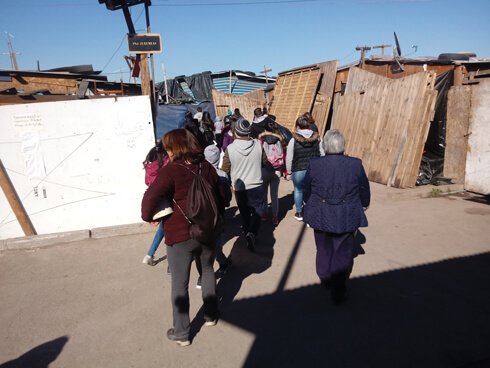 My husband, Mauricio and I, together with our then two-year-old daughter, Florencia, left Santiago in Chile in 2001 to commence our assignments as Columban lay missionaries in Britain. Almost 18 years have passed since our plane took off at the international airport and so many things have changed since then, changes not only in our personal and family lives but also in our country of birth.

We recently had the opportunity to go back to Santiago on home leave. Upon arrival the warm weather greeted us - something that’s always missed in a predominantly wet and cold Britain! The stunning mountains and the familiar sound of Spanish being spoken by the customs officials made us feel like we were back home. However, as we drove from the airport through the capital city to our family’s homes we were hit with a new, different face of Chile.

Along the journey one could observe tents pitched along the central reservation that divides the dual carriageway leading to the city. Passing the central market, hundreds of people could be seen - people from different races and speaking other languages. At traffic lights, street sellers approached cars offering all sorts of merchandise, from light refreshments to handbags, socks and anything small that one can imagine. At some traffic lights we observed circus juggling being performed, a sophisticated dance or a magic act in return for a few coins.

We were quickly updated on the changes in the country: ‘We are full of Peruvians, Haitians and Venezuelans’, ‘they are everywhere’ ‘they are taking our jobs’. One could easily pick up a little uneasiness when referring to people from other countries who had moved to Chile. The latest census in 2017 revealed that there have been significant demographic changes since the 2002 census when the number of foreign nationals residing in Chile grew from 187,008 to 746,465. This final number represents 4.4% of the total Chilean population with 65.3% of these newcomers residing in the capital city. 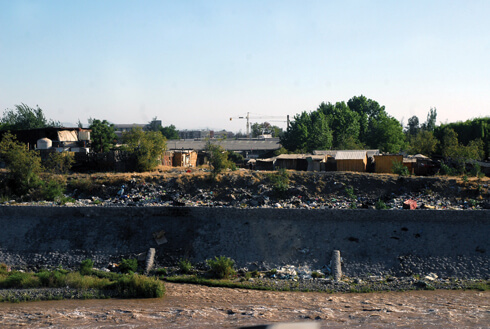 There are areas in Santiago that are well known for having high concentrations of people from Haiti or Venezuela. If you happen to be at the Cathedral on a Sunday you will observe that on the right side of the building only the Peruvians gather.

During my time in Santiago, I had the opportunity to visit a Columban parish to share my experience of working with people from different backgrounds and religions in Birmingham. Afterwards we had the chance to see first-hand the appalling conditions that some migrants live in.

With Columban Fr Daniel Harding and two people from Haiti we were shown how a very small one-storey house had been converted into eight, three by three metre 'self contained’ rooms which availed of two bathrooms. An extension of corrugated tin and pressed wooden boards had been built onto this house with a rounded metal staircase that connected the ground and first floor. About 25 people, mainly from Haiti and Venezuela, adults and children, including a newborn baby, lived in these overcrowded conditions. Each tenant kept a bucket for their washing, a stove with a gas cylinder, some furniture and a few personal belongings in their rooms. These were common scenes around the neighbourhood. I wondered about the council’s role here in overseeing housing regulations, never mind health and safety, remembering that Chile is a seismically active country!

A couple of weeks were enough to discover some new elements present in the Chile of today.

The challenges emerging from change and diversity are palpable as one listens to people’s stories.

The abuse towards the most deprived and vulnerable is evident when looking at housing conditions. Chile is no longer the fairly mono-racial culture I grew up in and this brings opportunities as well as challenges.

The Chilean Church, emerging from a deep crisis due to multiple abuse scandals, has a chance to play a role in promptly responding to the challenges of welcoming the newcomers into the communities.

And in doing so the Church will be faithful to our Christian responsibility of welcoming the stranger and protecting and promoting the rights of migrants.

Nathalie Marytsch is a Columban lay missionary from Chile, based in Birmingham.

Listen to The changing face of Chile