People often boast about having celebrated Mass in Churches that are, “centuries old”, such as the great cathedrals of Europe. But, what about celebrating Mass in a four thousand-year-old temple in Peru. Fr John Boles tells us the story. 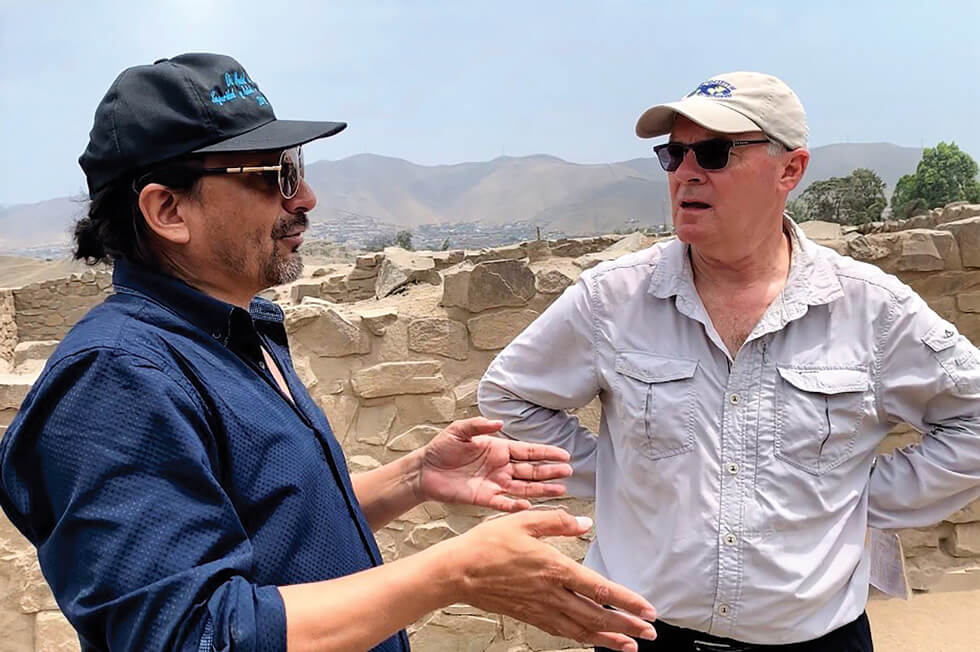 This was the privilege extended to me when I was invited to preside at Christmas Mass out in a desert shantytown on the northern edge of Lima, the capital of Peru. The settlement has only recently been established and has grown up around an incredible but little known archaeological treasure known as the Temple Complex of El Paraíso.

A common error among us Christians is to think that missionaries take the faith to “pagan” lands where the people know nothing of God. In fact, this is a fallacy. God has been revealing himself to peoples since the dawn of humanity. All the evidence suggests that, ever since humans began walking the earth, they’ve had a sense of the divine. The missionary encounters people to whom God is already present and simply needs to relate existing beliefs to a faith in One God and Jesus as our Saviour.

Spanish missionaries came to Peru 500 years ago. They found a religion deeply embedded in the native population – not exactly our religion, but a religion nonetheless. Furthermore, for thousands of years these inhabitants had been constructing huge temples to their gods from long before civilisation came to Europe, before even the Egyptians built their giant pyramids.

Beginning around 3,500 BC great cities began to appear on the Pacific coast of Peru alongside rivers nourished seasonally by rainfall and snowmelt from the nearby Andes Mountains. These cities were dominated by temples built in the form of step-pyramids. El Paraíso was one of these. All the houses have long since crumbled into heaps of dust, but the central stone-built temple survived. It was covered by wind-blown sand until discovered and unearthed in the 1960s.

The new village of El Paraíso as yet has no Church. Columban Missionaries only started serving the population there a few years ago. Mass is celebrated in the open air. Then, one day close to Christmas time, our friend Santiago Morales, chief archaeologist of the temple site, came to us with a novel suggestion. He invited us to have Christmas morning Mass there.

As we thought about it, the idea seemed to make more and more sense. The ancients who´d raised up that place had worshipped the gods of Water, Sun and Moon. These were the elements that gave them life - not so different, he suggested, from modern Christian beliefs. “Do we not use water in Baptism, the sacrament which gives us Life in Christ?” As for the sun and moon, “did not Jesus refer to himself as, ‘The Light of the World’?” And, “did not that Light come into the world at Christmas?”

Santiago’s suggestion had been inspired.

So, early on Christmas morning we gathered, singing carols, on what had been the ceremonial square in front of the temple building. A canopy had been set up to protect us from the ferocious summer heat. A plain table from the archaeological workshop served as an altar. As fellow Columban John Hegerty and I presided at the Eucharist we were aware of the connection across the ages, as the birth of Jesus was commemorated just as the sun was born at the dawning of a new day.

For the Gospel, a group of local youngsters acted out the Nativity. Afterwards, we shared a traditional Peruvian Christmas picnic of sweet bread and drinking chocolate, as Santiago reminded us that those long-ago worshippers had also feasted at their ceremonies.

They had even presented foodstuffs like corn and llama meat as offerings, while we’ve offered bread and wine to be the Body and Blood of Christ.

Later, I remembered how, when in Athens, St Paul had seen an altar dedicated to “An Unknown God”. He’d gone on to congratulate the “pagan” Athenians for being so pious, and said he’d come because “the unknown God you revere is the one I now proclaim to you” (Acts 17:23). He foresaw the success of Christianity there precisely because God had already revealed so much of Himself, albeit in an indirect way.

Similarly, maybe one of the reasons Christianity spread so quickly in South America was that the Holy Spirit had done so much of the groundwork before the missionaries arrived.

Perhaps it was prophetic that the name of the temple setting for our Christmas Mass was “El Paraíso”, for “Paraíso” in English is……….”Paradise”!

Fr John Boles is a Columban Missionary from England and has worked in Peru for over 25 years.

The Temple Complex of El Paraíso flourished between 2,300 – 1,500 B.C. Set before a ceremonial square, it consisted of a stone-built step pyramid topped by a sanctuary, where offerings were received and burnt in ritual celebrations. The people of this culture had a profound knowledge of astronomy. Their gods were apparently those of Water, Sun and Moon, represented by animals such as the Frog, Eagle and Fox.

A priestly elite was supported by agricultural surpluses of cotton, maize and sweet potato. These items were also traded for products obtained from groups in the mountains. The local diet was supplemented by fish and other seafood.

The site was abandoned when local climatic change caused the drying up of neighbouring rivers. Remarkably, before withdrawing, it seems the inhabitants ceremonially “buried” the temple under rubble excavated from nearby hills.

Similar valley civilisations along the Pacific coast of Peru rose and fell from 3,500 B.C. until about 500 A.D. From then on, the area came under the control of various Andean empires. The last of these, starting in around 1430, was that of the Incas, who built Peru´s most famous temple-palace complex at Machu Picchu. A century later, the Incas in turn were conquered by the Spanish.