On mission from Aotearoa 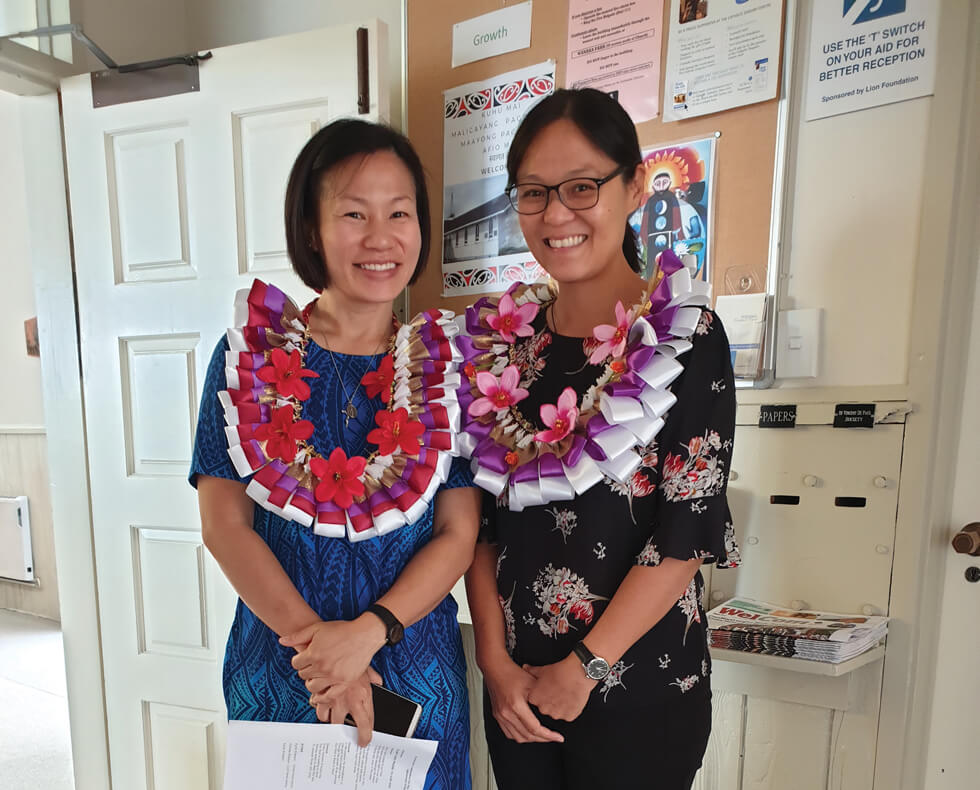 In 1920 sixteen priests gathered in Ireland to prepare for their journey to China. As part of their preparations, they would make their oaths of aggregation and sign their membership agreements. They were the first group of Columban missionaries to go overseas on mission. Leaving on March 19, they would have likely been aware that they were travelling under the cloud of the devastating flu epidemic of 1918-1920.

One hundred years later, on  February 19, 2020, we gathered to celebrate the commissioning of the first two Columban lay missionaries in Aotearoa-New Zealand: Sophia Ting and Chuah Hui Ling. They are preparing to take up their overseas mission to Britain. This commissioning took place during the celebration of the Eucharist in the Church of Sts Peter and Paul, Johnsonville, a Church that is very special to us as Columbans because it is the home parish of Fr Francis Douglas, the first New Zealand Columban to die overseas. Fr Francis would have probably celebrated Mass with his family there before he left in early March 1937 to begin his journey of mission to the Philippines. He was tortured by soldiers of the Japanese imperial army and died in the Philippines in 1943.

In 1946 when Bishop Edward Galvin was reflecting upon the experience of founding our Society and the journey of the first group to China, he remarked, “It was a mad thing to do.” But when I think about how this initial group that went to China and Francis Douglas would have thought about what we celebrated last week, they would have thought this would have been crazy or inconceivable in their day and age. As priests in a highly clerical church, how could they have imagined that the Society would include lay members, that we would see mission as that to which both lay and ordained are called by virtue of our baptism, that we are called to work as equal partners on mission? What is more, Johnsonville parish is under lay leadership. So Johnsonville parish was an appropriate community to celebrate this commissioning with because we were not only celebrating a new way of living out the call to mission but also a new way of being Church!

Sophia and Ling chose to keep to the readings of the day, the Saturday after Ash Wednesday. Providentially the readings were so appropriate. The reading from the prophet Isaiah speaks of the call to free oneself from all that holds us back from living out the call to mission, the call to feed the hungry and support the oppressed, to be a light in the darkness. It speaks of the need to place oneself in the hands of the Lord when one grows weary because the Lord will refresh us and it points to a key dimension of our mission which is to be reconcilers, breach-menders, to bring peace and calm to those who wonder how they can find a way beyond the ruins of their lives.

And then there was the Gospel reading of the day. It reminded us of the reading on Thursday after Ash Wednesday when we face the choice – life or death. But this Gospel reading about the call of Levi is not about our choice. It is about the Lord’s choice. Sophia and Ling had chosen to enter into accompaniment and formation in order to discern whether or not it is God’s choice that they follow the call to become missionary-disciples of Jesus Christ. So, in the end, they came to know what Jesus' words meant, “It is not you who choose me but it is I who choose you – to go and bear fruit, fruit that will last.” (cf Jn 15:16)

It was a wonderful and memorable occasion. Present were family and friends of Sophia and Ling who have every reason to be proud of what they have achieved. Members of the Fiji community of the Archdiocese of Wellington provided the choir. This was significant since Sophia and Ling had undergone their lay missionary formation in Fiji over the past year. Columban Frs Pat O’Shea, Don Hornsey, David Arms and myself were present to welcome Sophia and Ling into the Columban family.

Please remember Sophia and Ling in your prayers as they complete their preparations for their missionary assignment to Britain.

Listen to "On mission from Aotearoa"