A milestone reached by few

The body may be bent now. An occasional walking stick supports movement. The muscles that once pushed it through rugged bush paths and up rough mountain tracks less supple. They no longer swing a mattock or relentlessly power tennis balls within inches of the baseline. 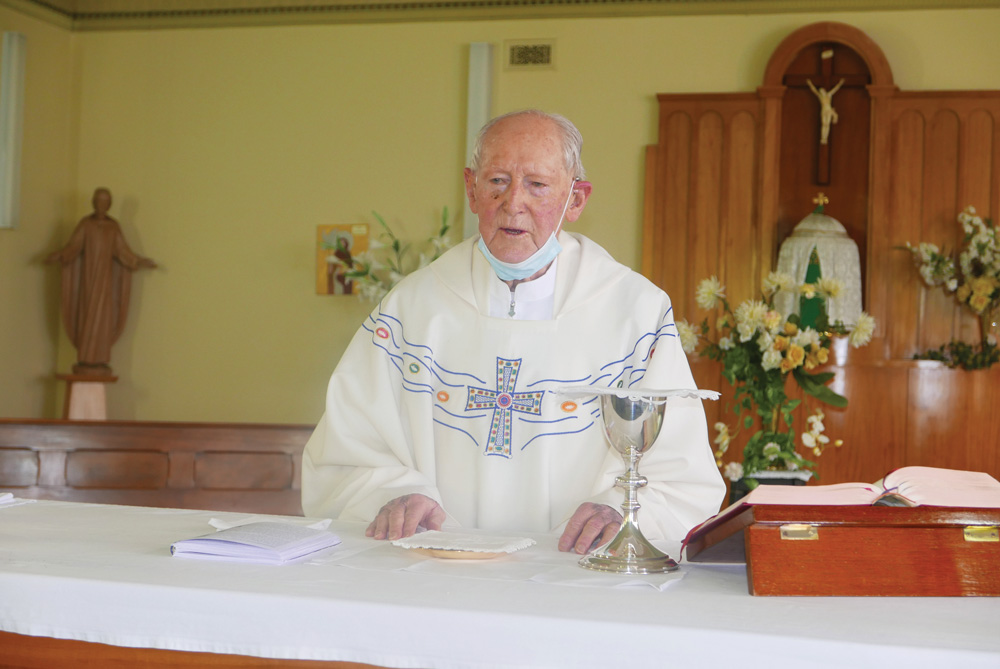 But for the rangy boy from a farm in Victoria’s Goulburn Valley life was never just about physical achievement. His keen intellect allowed an early entry into the Missionary Society of St Columban, which provided a path to further studies in theology in Rome, and scripture at the city’s famed Pontifical Biblical Institute.

However, Fr Christopher Joseph Baker never forgot where he came from. After a teaching career at the seminary in Sydney spanning 22 years and 30-plus among some of the world’s poorest people in Lima, Peru, he reflects on the profound value of respect, especially respect for the poor, respect for their aspirations and respect for their dignity.

“I did not have to pretend,” he reminisces. “I grew up poor. I know poverty and I know people welcome you if you approach them with humility and respect.”

He was one of three boys from his family to join the Columbans. “In my early days of teaching, my younger brother Pat was among my students,” he recalls. “That helped me to always keep a perspective on the dignity of students. Pat was my brother and the teacher-student relationship did not change that. This brought home to me that we are all brothers in one faith, sharing a common destiny. It helped me see all students with dignity.”

He was born on 14 January 1928. “We had an irrigated property, some dairy and feed-growing land, as well as a few sheep,” he explains. “But this was lost when the Great Depression hit in the 1930s.” The family then moved to the small town of Tatura, while his father eked out a subsistence living on a pittance gleaned from labouring on Government relief programmes.

Although he was still a young child, the stone-faced indifference of the financial bailiffs repossessing the family farm is something that has never left him.

Nevertheless, life went on. He began education at the local parish, moving onto a Government high school in a neighbouring town. But when he showed an interest in following his older brother, Leo, into the Columbans, he was sent to the Christian Brothers at St Patrick’s College in Ballarat to matriculate and learn a bit of Latin.

In 1944, at the age of 16, he began his formation for the priesthood at the Society’s stately Essendon House in Melbourne. Today, as he sips a gin and tonic in the very same room where he had studied and shivered through Melbourne’s cruel winters, he rejoices in the heater and the more relaxed atmosphere it offers.

Two years of philosophy followed before he joined other Columban students at Melbourne’s seminary in Werribee, where he remained until ordination day at the young age of 22 in St Patrick’s Cathedral on September 23, 1950.

Here, his quintessential Victorian identity came to the fore, as a bombshell dropped by the then-Columban superior shattered his plans to celebrate with his family and follow the grand final in which he still remembers Essendon triumphed over North Melbourne.

He was to have a passport photograph taken and prepare to leave for Rome on the following Friday!

To the boy from the farm, Rome was both exciting and fascinating. The beauty of its architecture, dismay at its ruins and long reach of its history intrigued. Its internationality cast the highly mono-cultural Melbourne into a new perspective and he knew fresh vistas were opening up on his life.

“I had arrived just in time to witness the last occasion a Pope spoke infallibly. On November 1, 1950, Pope Pius XII declared the Assumption a Doctrine of Faith. It was the last time it happened, and I was lucky enough to be present for that,” he says. “It was also a Holy Year and there were lots of activities happening in the city. I visited many of the major churches where these events took place.”

In mid-1955 student days ended. It was back to the newish Columban theologate in Wahroonga to teach. Despite his international experience, the boy from the farm recalls with affection the space, the vegetable garden, and the cow and fruit trees. “I taught Scripture, as well as French, then a bit of Greek and Hebrew,” he explains. But things were progressing and much energy was being put into the move to the spacious, new building in North Turramurra. It opened in June 1959.

Columban Bishop Tom Quinlan came from South Korea.
The archbishop of Sydney, Norman Cardinal Gilroy; the abbot from the Trappist foundation at Tarrawarra in Victoria; a consul from Formosa; the mayor of Ku-ring-gai; Father William Leonard, whose Columban brother was killed in China in 1929; and a great many more of lesser degree all gathered for the occasion.

“It rained heavily, but was a magnificent day,” the 92-year-old says. “The very design of the building said a lot about relations between staff and students. It spelled trust. The two recreation rooms at either end of the structure.”

It was his home for the next 18 years, as rector from 1961 to 1966, then as acting rector in 1969. Teaching was always dear to his heart and a note from a former student, a not-so-young Fr Barry Cairns in Japan, telling him he still uses material from his classes on God’s covenant promise came as a testament to the value of his vocation as teacher.

He thanked his brother Columbans able to gather to celebrate the milestone in his life, many of whom had sat at his feet in the classroom, for their study, conviviality and dedication to their vocation.

In his lifetime, he has been student, teacher and pastor of souls. He had the opportunity to prepare others for foreign mission and later received the great blessing of being able to join them. It is a wide variety for one man, but always marked with his empathy, love and sharp insight.

Even in retirement with failing eyesight, he reads prolifically and his comments on affairs, both religious and secular, remain as incisive as they were in his heyday as a student, teacher and shepherd of souls.

One of eight children, the past 12 months have been difficult for him, losing three of his brothers and a sister-in-law. These he accepts with grief, but also a somewhat stoic trust in the communion of saints to which he strongly believes we all belong.

Seventy years of priesthood is a milestone reached by few, but of far greater import is his contribution to the lives of others, which cannot be measured in years alone.

Listen to "A milestone reached by few"