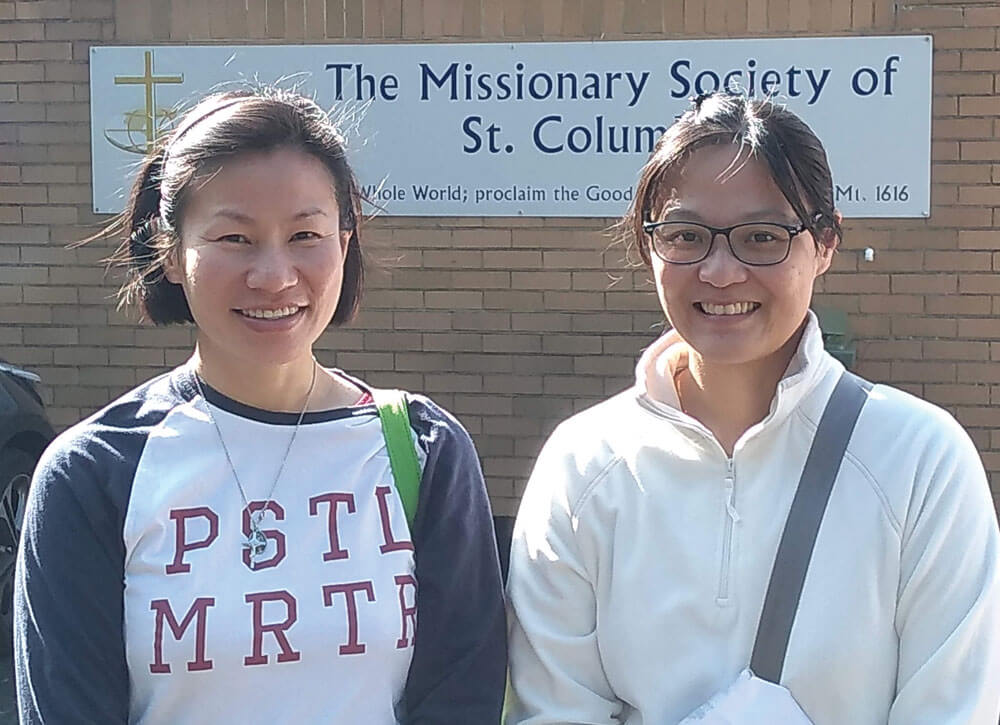 Sophia and Ling both arrived in Britain at the beginning of September and, having spent two weeks in isolation as a precaution, have begun to explore the local area, keen to im-merse themselves in British culture and begin their mission assignment here in Birming-ham.

Sophia gave me the story of her vocation to Columban Mission in these words: “I spent many years working as an Electrical Engineer in New Zealand. Then in 2011, I attend-ed the World Youth Day in Madrid. It was there that I questioned my purpose in life, my fu-ture and critically my faith and my relationship with God. I felt an urgent need to discover more about myself, my Christian faith and how to live out my faith.

In 2017, I met Columban Fr Donald Hornsey at a youth retreat in New Zealand. He told me all about the Columbans and their new Lay Missionaries Programme. It led me to the discernment of my calling to be a Lay Missionary.”

Then Sophia, together with Ling, attended a nine month accompaniment programme in New Zealand before travelling to Suva, Fiji, in March 2019 to begin the Columban Lay Missionaries orientation pro-gramme.

There they immersed themselves in the Fijian community and participated in intercul-tural workshops, various mission awareness and promotion projects to familiarise them-selves with Columban values and the lay mission ethos.

In September 2019 they were given notice of their mission assignment to Britain and began visa applications shortly after. Because of several visa holdups and delays, and, of course the onset of the worldwide coronavirus pandemic travel restrictions, their arrival in the UK was further delayed. But these setbacks have only fuelled their excitement and ea-gerness to begin their ministry here

When asked about current involvements, Sophia explained: "Ling and I are still in our orientation programme. We have been introduced to, and immersed ourselves into some of the many projects supported by the Columbans in the local area. For example a nearby food bank and the Narthex Re-source Centre for refugees, migrants and people in need."

She adds, “We’ll also be supporting the society’s internal ministries such as the JPIC (Justice Peace and the Integrity of Creation) Education programme promoting Laudato Si’ and the integrity of creation among students in local religious schools." Besides this, they are also involved in inter-religious dialogue and intercultural programmes as well as Fatima House that offers sanctuary to destitute female asylum seekers in the city.

"We have also started our immersion into new initiatives in Birmingham and recently attended Tuesday breakfast with the homeless led by ‘Let’s Feed Brum’. I have been told that Brum is a nickname for Birming-ham!"

"So far, I have enjoyed my orientation programme and immersions and I believe my involvement in these ministries and projects will help me live out my faith in God.”

Emma Darling is the Communications Officer for the Missionary Society of St Columban, Great Britain.

Teresa Hui Ling Chuah has written to give us this update on life in Birmingham:

During the two weeks of quarantine after our arrival in the UK Sophia and I shared a flat together. It was a good time to rest, pray and recover from jetlag. Now that those two weeks of isolation are over, we are busy moving to another house where we will live with two other Columban Lay Missionary companions, Gertrudes Samson from the Philippines and Roberta Kim from Korea.

Our orientation pro-gramme has introduced us to Fatima House, which provides support for refugees and asylum seekers, and tointer-religious dialogue and JPIC work. We are also getting to know about other ministries that the Colum-bans are involved in here and have been blessed to assist with serving breakfast for the homeless.

Recently there has been a resurgence of COVID-19 cases in the UK and Birmingham is a hotspot. So, we must be alert and aware of the need for social distancing and strict hy-giene. I am doing my best to take care of myself and trust that I am in the caring hands of God. I sometimes manage to find daily Mass here even though it is a bit far. I also find Church from within, meaning within my heart.

There are many people from Pakistan, the Middle East and Africa in our area. We often walk or take the bus to familiarise ourselves with Birmingham. The Columbans are provid-ing me with a new bicycle so I will be able to cycle rather than take the bus.

Please pray for all Columban Lay Missionaries especially on the occasion of the 30th an-niversary of their inauguration.