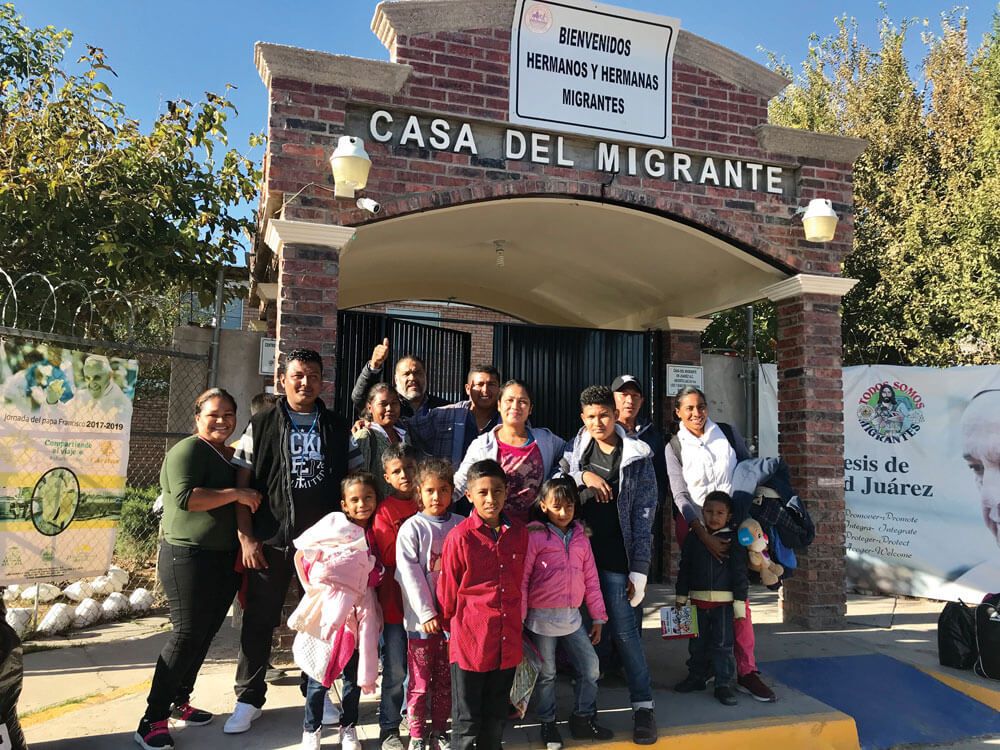 The theme chosen by the Holy Father for World Day of Migrants and Refugees in 2020 was “Forced like Jesus Christ to flee” to focus on the pastoral care of Internally Displaced People (IDPs). Let us be united with all people working for migrants and refugees and for the migrants themselves, knowing that Jesus had to flee like them from danger with his parents, Mary and Joseph.

Columban Sisters have been given the privilege of walking with the migrants/asylum seekers here on the Mexican/U.S. border, listening to their stories and sharing their hopes and fears. These people no longer make television or newspaper headlines yet their plight is never far from the surface of political discourse. In support of migrants, Pope Fran-cis recently added 'Mother, consolation of Migrants' to the Litany of Our Lady. In this significant moment, Pope Francis asked us "not to let fears and prejudices keep us distant from others, but to look into their eyes and feel their pain."

The Trump administration has effectively closed all doors and the U.S. Supreme Court denies asylum seekers the Right to Appeal deportation rulings. These decisions can be a matter of life and death for many people. The so-called 'Remain in Mexico' policy keeps would-be asylum seekers waiting for months until their case is adjudicated and, now that the courts are closed due to the Coronavirus pandemic, they do not even have a possible date for a hearing. Most are desperate as they cannot return to their home coun-tries - Guatemala, Honduras, El Salvador, Nicaragua, Ecuador, Brazil - due to gang violence, death threats or extreme poverty, so they are prepared to risk their lives to cross the border.

The plight of so many families is summed up in a very touching poem:

On a road to nowhere

Nobody knows what it’s like
to walk through the night
on a road going nowhere.

Nobody knows what it’s like
to be denied at a country’s border.
To walk on a road going nowhere.

Nobody knows what it’s like
to leave the only place you’ve known
and to be on a road going nowhere.

Nobody knows what it’s like
to fear for your life
sleeping on a road going nowhere.

Nobody knows what it’s like
to hear the politicians fight
about how to get you off the road going nowhere.

I am inspired by the refugee's stories, how they have suffered during the long hazardous journey and the risks that they have taken to forge a safer life. When I asked one young woman with two small children where they spent Christmas day last year, she told me of their four-day trek through the desert, with no food and carrying the smaller children on their backs.

One woman fell and hurt her knee. She could not continue walking and thought she was going to die there - as has happened to so many others but 'God sent her an angel.' A truck driver found her and brought her here to a safe refuge, Casa del Migrante, a safe refuge in Juarez, Mexico.

It was heartbreaking to hear the story of another woman who left her child at the border, in the hope of crossing over to be with the rest of the family when she herself had been deported. The faith and resilience of these people is truly inspiring, as against all odds, they risk everything to have a better and safer future for their families.

This Christmas, let us remember all those who like Jesus are forced to flee from their homes in search of a better life for their families. Let us remember our ancestors who left their homelands, looking for a better future for their families. Let us acknowledge their contribution as history repeats itself in our world today. Let us pray that we can make a difference for others so that God’s Kingdom may become a reality.

On a road to nowhere

On the road going nowhere.