A fan of The Far East for 65 years

As a child, Sister of Compassion, Sue Cosgrove, remembers reading The Far East – and it became a lifelong and inspiring habit. 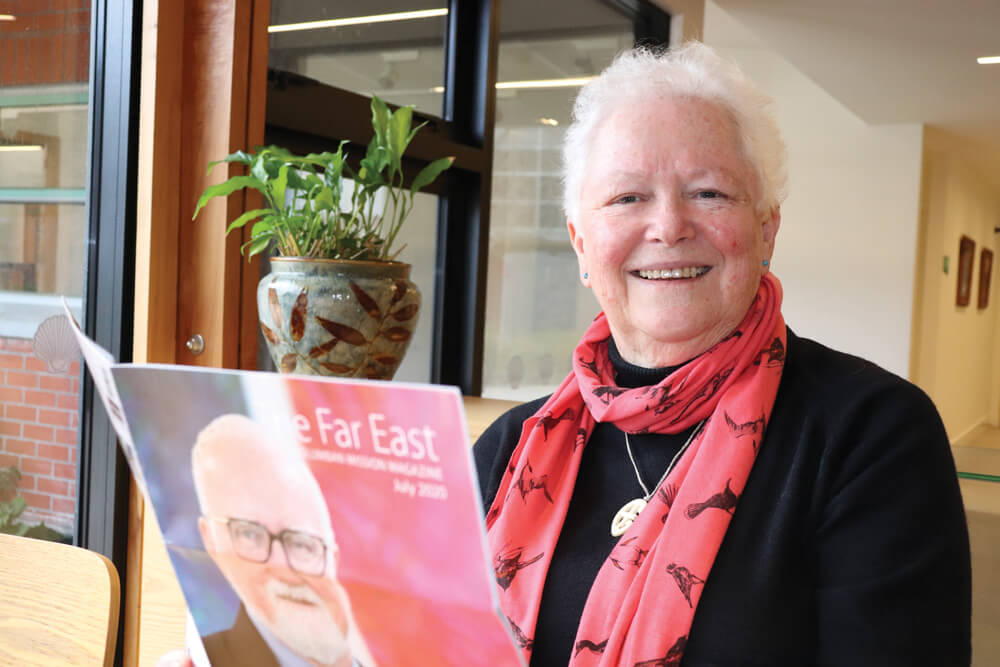 "I’ve been reading the Far East for 65 years, I reckon.” Sr Cosgrove, who grew up in New Zealand’s south island town of Timaru, said. “And probably the earliest memory I have of learning to read would be Mickie Daly’s Diary in The Far East".

“We always had The Far East at home. Always. It was part of our family.” Just as Mickie and his antics captivated generations of readers of The Far East (and the column’s creative spelling confounded many parents and teachers), the missionary tales of adventure inspired young Sue Cosgrove and her siblings.

The Cosgrove household had another strong connection with St Columbans Missionary Society - New Zealander Fr John Griffin, was born and raised in Timaru, and was a family friend. “It just so happened he (Fr Griffin) was ordained on July 25, 1950, and that was the day me and my twin were born.” Sr Cosgrove said. “Mum and dad couldn’t go to his ordination ‘because the twins were being born’. “And it’s always been part of the folklore in our family when we were little and Fr John Griffin would come and visit.”

Together, Sue Cosgrove and her brothers and sisters saved their pennies for the Jackie mite box, supporting the Columban Missions and thinking of Fr Griffin and a world well beyond their own small circle in Timaru. Fr Griffin’s first Missionary Assignment was to the province of Zambales, north-west of Manila in the Phillipines. He spent 20 years there, in poor rural parishes, learning local dialects and cultures and aiding communities in need.

But a medical emergency in 1970 meant he was brought home to New Zealand for the amputation of his right leg due to cancer. The medical specialist spoke of a choice, "Your leg or your life". However, he later volunteered to serve in Latin America. He learned the Spanish language and worked in Chile. For ten years he assisted the Columban team in the capital, Santiago.

“We always knew about people like Fr Griffin in the Philippines and then in South America,” Sr Cosgrove said. “They stretched not only our imagination, but gave us a world view. Their gospel of life is so inclusive and grounded just with the ordinary people where they were – whether it be in Chile or Pakistan – and that’s what I loved about the Columbans I knew. And they went to darker places at times. So I always think of these men and the wider Columban family as having a lot of courage and trust in each other, and in people, and in God, of course.”

At the age of just 17, Sue Cosgrove’s own faith journey led her to join New Zealand’s Sisters of Compassion, a congregation founded by the “venerable” Suzanne Aubert at Jerusalem – Hiruhārama on the Whanganui River in 1892. “And that’s when I got tuned in and in touch with the heart of who we are” Sr Cosgrove said.

Sr Cosgrove said the Sisters are dedicated to “ordinariness” - bringing dignity to the lives of the aged, the powerless and the poor - and this is why she “resonates” with the Columbans, admiring their work over many decades. “They pay attention to just the ordinary person and to the most vulnerable,” she said.

One of the Columbans that Sr Cosgrove has worked closely with over the years is Fr Tom Rouse, a well-known New Zealander who spent 23 years on mission in Fiji, and who later became the Columban Mission Co-ordinator for New Zealand. Sr Cosgrove met Fr Rouse in Fiji where the Sisters of Compassion have also worked since the 1950s and together they have collaborated on justice and peace issues in New Zealand.

She describes Fr Rouse as “one of the most compassionate people I know”, who, despite a significant hearing impairment, has managed to learn languages with fluency and continue his missionary calling. In Fiji, Fr Rouse helped trade unionists, rural and religious communities to understand why there was a gap between the rich and poor and aided them in standing up for the poor.

He bravely spoke out against the military coup of 1987 and was arrested at a first anniversary gathering along with fellow Columbans, Frs John McEvoy and Paul Tierney. On the final day of a nine-month trial they were all discharged without conviction.

“The thing I just love about the Columbans these days is that every time I read The Far East there is always mention of companions in mission,” she said. “It is this inclusivity, the Columban involvement with their companions, co-workers, who happen to be women and lay people.” “Their spirit will live on. And their charism doesn’t just belong to the Columbans, their charism belongs in the bigger picture.”