From his red leather chair

At 87, Gilbert Alison likes nothing better than the comfort of his red leather chair, a morning coffee and the latest edition of The Far East. 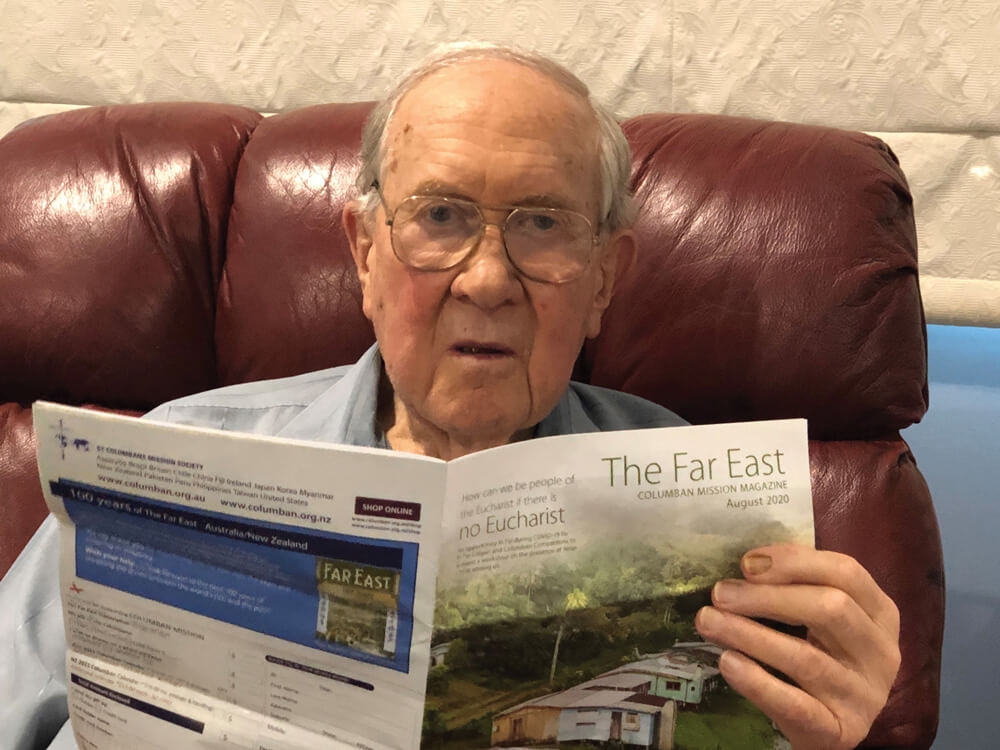 The former Queensland Member of Parliament is an avid reader of The Far East magazine and has been a Columban supporter for 60 years, beginning when he bought his first iconic Columban Art Calendar.

“I never fail to get inspired by what they do, these missionary men and women, and what they give up to go elsewhere,” Mr Alison, who lives at Tewantin on the Sunshine Coast, said. “How do they do it - upheaval, moving to another country, learning another language, to live among the people? And they don’t write much about their personal discomfort.”

Mr Alison’s fascination for the travels and challenges of Columban priests and Lay Missionaries has helped lay a foundation in his own life, including his political career. Raised in a strong Protestant family in Maryborough, Queensland, he converted after meeting a Catholic nurse named Florence at the local general hospital. Florence became Gilbert’s wife and they raised a family of five boys and two girls and now have six grandchildren and two great grandchildren.

Early in their marriage, and as a newly-converted Catholic, Gilbert recalls buying his first Columban Calendar. “It was the first inkling I had of an organization called the Columbans. Their calendars were very beautiful - full of reproductions of religious art,” he said.

Mr Alison has been a donor ever since, contributing to the Columban’s annual fundraising efforts, and subscribing to The Far East for the last decade. As a chartered accountant, he spent most of his early married years in the one spot, Maryborough. The “humdrum” routine of daily life there contrasted with the precarious, travelling, life of Columban missionaries

He dabbled in local politics and became the city’s deputy mayor. Then in 1971, as a city alderman, he successfully ran for state parliament, unseating Maryborough’s Labor member. He sat as a Liberal MP for six years, was defeated, and was later re-elected as a National MP for another six-year term.

Joh Bjelke Petersen was his Party Leader and Premier, and he served for several months as Minister for Main Roads and Racing before his retirement. He remembers Mr Bjelke Petersen as a shrewd and unbending premier. “He used to have a saying in parliament: ‘If you give me trouble, I’ll give you two’,” Mr Gilbert said. “I liked him. I had no evidence of corruption from him. And that’s how I take people - as I find them.”

During those years in politics he managed to undertake a number of overseas study trips, for instance, visiting Iraq and Beirut, experiences that he believes opened his eyes and made him a better MP. “I got to see what the rest of the world was doing. It made me think,” he said. “My wife and I have travelled through parts of Europe and Asia. We’ve been blessed that way. “

As his travel experiences grew, Mr Alison said it helped him appreciate the missionary work of the Columbans and their faith in difficult situations. Five years ago he suffered his own family loss and his own faith was tested when his second son, Bradley, died of cerebral malaria while working in Papua New Guinea.

“You can call on God to help you, and I believe He is around you all the time,” Mr Alison said. “And we need help. We may not get the help we want or how we want it, but He’s still there.”

Over the years, reading The Far East, Mr Gilbert has enjoyed the down-to earth storytelling of Columbans like the late Fr Noel Connolly - a fellow Queenslander from Gympie – with narratives that delved into the mysteries of the spirit. “He always seemed to have an empathy for the ordinary man. That’s how he wrote,” Mr Gilbert said.

And he recalls the stories that have touched him - inspiring tales of Columbans establishing faith communities within the local church in countries where there is a gulf between rich and poor, dealing with inter-faith relations and seeking justice and dignity for those denied their rights.

“I do a fair bit of reading and I’m still interested in politics and I’m interested in how humans can muck a country up, no trouble at all,” Mr Gilbert said. “Take Venezuala for instance: Oil rich, but who mucks it up - the people in charge! It’s really sad when you see it and there’s really no need for it.”

“The Columban Missionaries approach from a different angle – they are religious men and women living with people in the poor areas. That always amazes me and in The Far East you are getting their viewpoint with an emphasis on the people they attend to.”

As a former politician, Mr Gilbert said the magazine’s articles had given him valuable insights into where Australian society should be headed. “We’ve become very soft people in my view,” he said. “There is need for greater consideration of our fellow men and women in our community.”

“I can’t understand why we have tens of thousands of people sleeping rough at the moment and we can spend billions of dollars on fancy infrastructure". “What are we thinking? Can’t we work out how to help those people who need it into accommodation instead of having to sleep rough?"

“We need the same missionary zeal of the Columbans to get amongst the people who are vulnerable and need help, and need somebody to speak up for them.”

Listen to "San Benito: Community kitchens in times of COVID-19"