While local, mostly faith-based, groups have tried to respond to the chronic drug addiction problem among men, there is no outreach to women. They are the forgotten people in this unfolding tragedy. 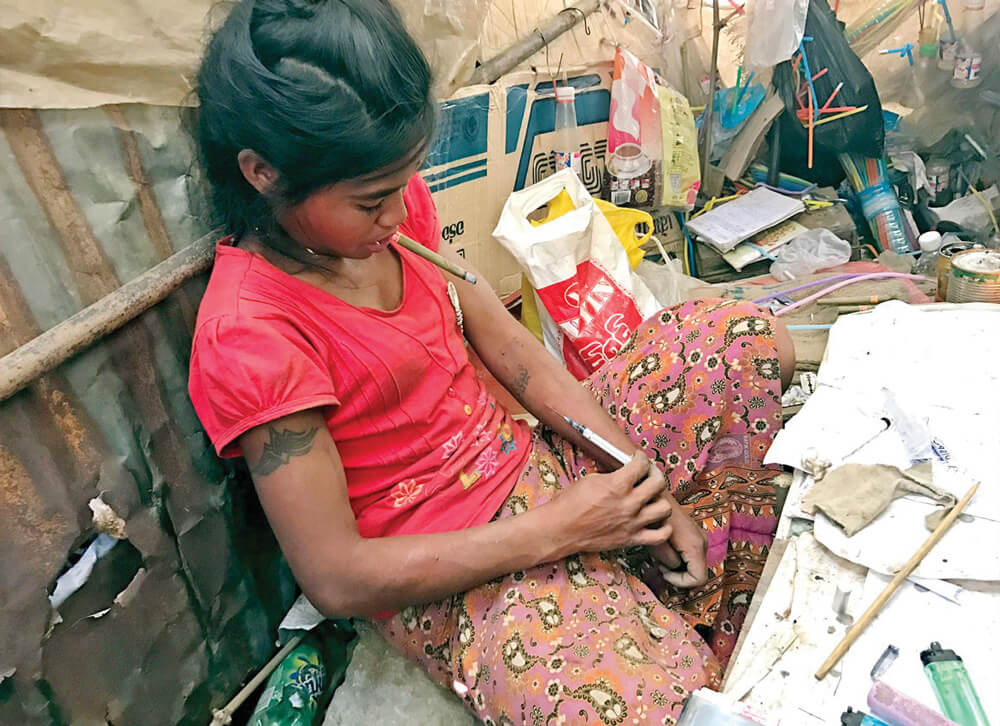 A young Burmese woman with an addiction to drugs.

Kachin Land is a remote area of north-east Myanmar. The Kachin people are a warm, generous welcoming people. They are mostly Christian in this predominantly Buddhist country. They are victims of the world’s longest civil conflict, almost 70 years, between the Kachin Independence Army and the Burmese Military. It flared up again in 2011 driving 130,000 people from their homes and villages into camps for internally displaced people. The Kachin land is rich in natural resources that are harvested for others while the local people remain very poor. Most Kachins live in very remote areas and survive on subsistence farming.

This area is the second biggest producer of heroin and the biggest producer of meta-amphetamines in the world. With no prospect of meaningful work, many young people are easy prey for the drug pushers. Heroin, known as No 4 here, is the drug of choice and is easily and cheaply available. Thousands are dying, families are being torn apart and the culture destroyed by addiction. It is of epidemic proportions. It is not an exaggeration to say that every family has at least one or more members addicted to heroin. The majority of our clients also test positive for HIV and/or hepatitis C.

While local, mostly faith-based, groups have tried to respond to the chronic drug addiction problem among men there is no outreach to women. They are the forgotten people in this unfolding tragedy.

One of our clients, Peter (not his real name) told me the story of Mary (not her real name). Mary comes from a very poor family. Her father died when she was very young and her mother, who had no regular income, raised her and her younger brother. She finished school in fourth grade when she was just ten years of age. In her late teens, Mary with her friends began to experiment with drugs, drinking what is called formula, a mixture of alcohol and opium. Mary quickly became addicted.

To feed her habit she began singing in restaurants and bars and sold her body for sex to the patrons. On at least three occasions, she became pregnant and was forced to have an abortion each time. By her early twenties, she was a broken young woman. It was at this time that Peter met her and introduced her and her friends to heroin. She became addicted to it and earned money through prostitution and transporting and selling heroin for a drug dealer. Eventually she was caught and spent three years in prison.

During this time, Peter came to our Centre, the Rebirth Rehabilitation Centre (RRC) and found the key to recovery. He is now three years sober and is married with a child.

Recently he met Mary in the market after her release from prison. She looked very thin and sick. She was using heroin again and asked if she could come to our rehabilitation centre. He told her that we had no places for women but that we were planning to build a dormitory for them. He felt bad that he had introduced her to heroin and promised to inform her when the dormitory was finished so that she can come and find recovery.

There are many women like Mary, hidden in the shadows with nowhere to go. While a stigma attaches to male drug addicts, it is doubly so for female addicts. Some women addicts are trafficked to different parts of Myanmar and to neighboring countries, especially China, to work in the sex industry.

Rebirth Rehabilitation Center (RRC) was founded in 2015 by the Catholic Diocese of Myitkyina. This Diocese was founded and staffed by Columbans from 1936 until 1978 when Columbans had to leave due to civil unrest. RRC offers a program that treats addiction as a disease and not a moral failing. We have a holistic, client-centered approach that treats the physical, spiritual and mental nature of the disease. We are the only drug rehabilitation centre with this approach.

We introduce our clients to the 12 step spirituality of Narcotics Anonymous and Alcoholics Anonymous. Following the example of Catholic social teaching, we recognize the dignity of each human being made in the image and likeness of God and loved unconditionally. Thank God, we have a growing number of people who are finding long term sobriety. As each new group of clients arrives for the 15-week program we offer, I cannot stop thinking of Mary and the other women who are suffering in silence and who have nowhere to go for help.

At the RRC, we talked about how we could help women and in consultation with Bishop Francis Daw Tang, we decided to fundraise to build a dormitory for women. The Bishop has donated land beside the main centre. This means the women who come will be able to attend the sessions in the main centre. However, they will also need their own classroom so that they can have classes that are specific to women.

The total cost of the building, to accommodate 30 female clients, with a living area and bathroom facilities along with a classroom and fencing around the site, will be $70,500. It will not be easy to raise this money in these difficult times, but I believe that God wants these women to come out of the shadows and to find recovery, and so, a way will be found.

Columban Fr Eamon Sheridan is the Columban Mission Unit Coordinator in Myanmar and Chaplain to the Rebirth Rehabilitation Centre in Myitkyina.

Listen to "Women and addiction"