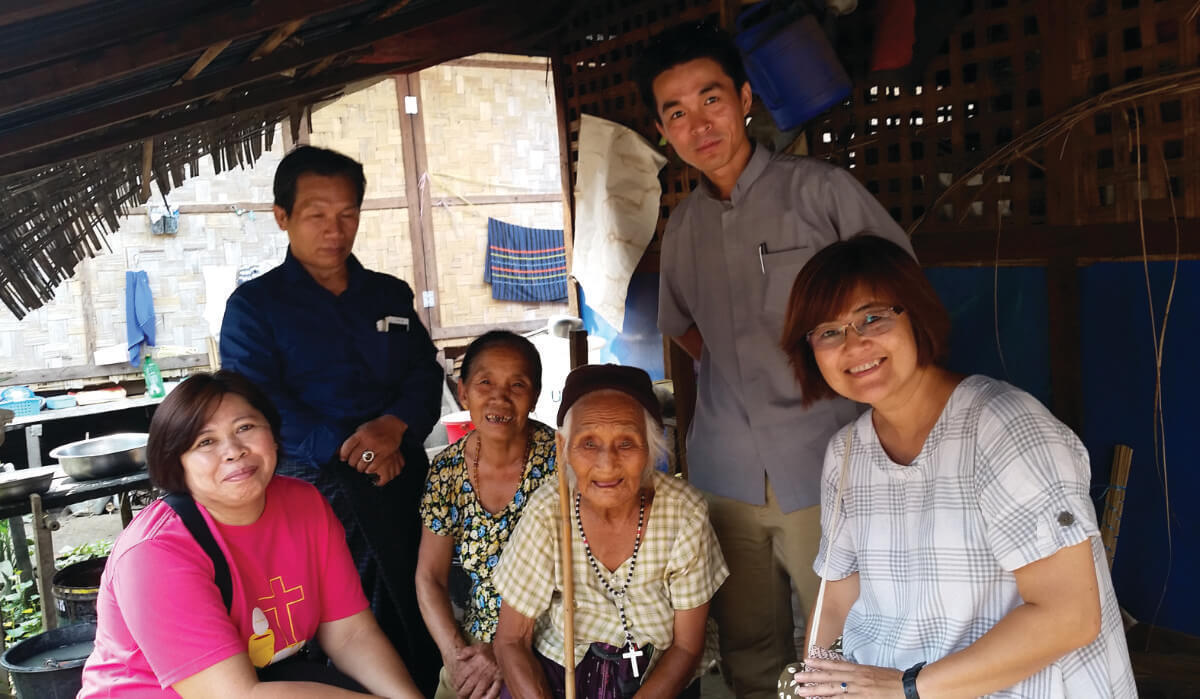 Anniversaries frequently have symbols associated with them - like silver for 25 and gold for 50. When the Columban Missionaries celebrated 100 years of witnessing God's love through our relationships with people, especially the vulnerable, and with the wounded Earth, I was curious about what might represent 100 years. A quick internet search revealed no symbol for 100 years, presumably because it is such a rare event. However, one comment about the diamond (60th) anniversary fits.

Diamond means unconquerable and enduring. Many people believe that the fire in the diamond symbolises the constant flame of love. It occurs to me also that the diamond is a stone known for its stunning and even blinding refractions of light. These images of fire and light that reflect a constant love seem most appropriate for 100 years of Columban Mission and illumination into the future.

It is fair to say that love was the spark that inflamed the hearts of our founders. One of my favourite quotes about Columbans in the early years comes from a book written by Fr James McCaslin called, The Spirituality of Our Founders. He writes in a section titled “Love and Service to the Poor”: This option in favour of the poor was in no way limited to this or that Columban. The cry of the poor has been in Columban ears constantly from the beginning. They were acutely aware of the massive structural injustice. They could not change unjust structures, but they did their best to alleviate the misery of the victims. For the love of God.

Today, we can see this constant flame of love in the Columban commitment to Justice, Peace, and Integrity of Creation. Identified as a formal ministry in 1976, we Columbans have included work for structural change as an integral part of our missionary endeavour for more than 40 years. Vatican II, which opened the window for Justice, Peace, and Integrity of Creation, affirmed we Columbans in what we knew from the beginning: that poverty, oppression, violence, and exploitation are interconnected and structural. We began to see more clearly and articulate more loudly the link between the economically poor across the globe and the wounded Earth, on the one hand, and national and international economic, social, and environmental policies, on the other.

Accordingly, we hold in our Constitutions that being Columban means: Striving to have the Kingdom of God permeate the lives and cultures of all peoples, we proclaim the universal message of salvation through witness, ministry, and dialogue from the standpoint of solidarity with the poor and the integrity of creation … It means supporting the struggle of the poor against injustice and for real participation in society … to thirst for God's justice and (be) peacemakers enamoured of true God-given community.

Moving beyond the pages of theory, Columban Justice, Peace, and Integrity of Creation is flesh and bone, heart and soul, hands and feet. Our commitments to issues like migration, climate change, peace, and inter-religious dialogue are because behind each issue there are countless people with names, faces, and families that are marginalised economically, socially, politically, and/or religiously. Human overconsumption has wounded the natural world.

Joining with national and international networks such as Global Catholic Climate Movement and Pax Christi International, Columbans are helping to shape and implement Catholic Social Teaching through encyclicals like Laudato Si': On Care for Our Common Home, and the Catholic Nonviolent Initiative. We lend our voices to dialogue happening in national governments and international institutions like the United Nations. We strive to be links between local realities and structural change. We invite people to learn about Justice, Peace, and Integrity of Creation through experiential educational opportunities like our advocacy internship in Washington DC, short-term volunteer service, and mission exposure experiences to the United States - Mexico border and other countries around the world.

Let me share with you a recent experience where I encountered Columbans’ constant love for the poor and the wounded Earth. I visited our mission in Myanmar where Columbans formally returned after about 35 years of exile. One of the pressing concerns in the country is the conflict between ethnic minorities and the Burmese majority. Columbans, both historically and contemporarily, are concentrated in Kachin State, where much of the country’s most intense fighting plays out. One of the consequences of this civil war is the internal displacement of thousands of people from their land and homes into Internally Displaced Persons (IDP) camps.

I had the opportunity to visit several IDP camps while in Myanmar. The conditions were heartbreaking, with entire families living in one 12 foot square bamboo room with no running water, limited electricity, poor health and sanitary conditions, and only limited access to education. However, I was heartened to see that Columbans, the dioceses, and international Catholic aid agencies were all working together to respond to this reality in some way or another through offering resources, education and pastoral accompaniment.

Pope Francis’s encyclical Laudato Si' invites us to hear the cry of the poor and the cry of the Earth. As Columbans, we find ourselves listening to those cries every day. While in one camp, one man shared with me his longing to return to his village so that his children would know the land of their roots and be able to live peacefully as their ancestors had done for generations. In another camp, when word was out that Columbans were visiting, one woman aged 98 years came quickly to greet us. She was affectionately called Adwi Gungai, or Grandmother. With warmth and emotion, she spoke of knowing the first Columbans who arrived in Myanmar in he early 1930s. She would have been a young girl at the time, and it was clear that she had carried a constant love for Columbans all her life - she was happy to be reunited after decades of separation.

It is easy to be inspired by these encounters with people who carry in their hearts sparks of love, light and hope for the future that shines, as St Paul wrote in his letter to the Corinthians: Now the Lord is the Spirit and where the Spirit of the Lord is, there is freedom.

All of us, gazing with unveiled face on the glory of the Lord, are being transformed into the same image from glory to glory, as from the Lord who is the Spirit.

For God, who said, “Let light shine out of darkness,” made his light shine in our hearts to give us the light of the knowledge of God’s glory displayed in the face of Christ (2 Cor 3:17–18; 4:6).

Adwi Gungai was a living witness to the constant flame of love that the Columbans have tried to live for over a century. As we look towards the next century, may Adwi Gungai be a reminder to us all of our hearts’ burning to be in relationship with each other and the wounded world. May the diamond of today be our fire for tomorrow.

Listen to "Constant flame of love"