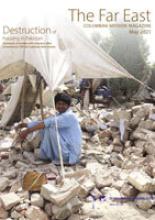 In this issue of The Far East magazine, the message of hope for the world is reflected in articles from many countries where Columbans work.
Read more

A man on a mission

Destruction of housing in Pakistan

In March the houses of 450 Catholic families in Pakistan were destroyed and those of 1,000 Christians will be bulldozed by Government officials…
Read more

Most Catholics were agricultural labourers whom the Muslim landlords would allow only one day for an Easter holiday. They were able to come to…
Read more

Chaplaincy to the Chinese diaspora in Ireland

Columban Missionary, Sr Mary Greaney, has been instrumental in establishing a flourishing parish for the Chinese community in the Archdiocese…
Read more

Of such legends are made

Magellan’s records suggest that about 800 people received the sacrament of baptism between his arrival on April 7 and his death three weeks later,…
Read more

I left Peru in a wheelchair

In March, Columban Fr John Hegerty returned home with a heavy heart to Australia after 49 years in Peru.
Read more

From the Director - The significance of the liturgical seasons

The liturgical year is a picture of our lives. Most of the time we do not have anything special happening. Our lives being quite ordinary.
Read more

“Home is where you are understood," says the prophet, and we missionaries claim to have at least two homes: one in our country of birth, and…
Read more

With gratitude to the Columbans

The communal nature of funerals in Fiji reminds Columban Fr Pat Colgan of how funerals used to be in Ireland. Here he writes about the burial…
Read more