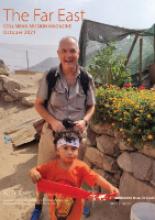 From the Director - The pandemic is an opportunity

We can believe that with God’s help we can learn many lessons from our experience of the pandemic. We can discover what we are made of. We may…
Read more

From mind to heart

The Columbans of old can be proud of the seeds they planted all those years ago in the hearts of the Indian children of the cane fields of Ba!
Read more

In August 1945, the Allied Forces of World War II dropped atomic bombs on the Japanese cities of Hiroshima and Nagasaki magnifying the need for…
Read more

Reflection - Acts of the Apostles - Vision for a Synodal Church

Where is the Spirit leading the Church? That is the underlying question in the Acts of the Apostles. Columban Fr Tom O’Reilly suggests it is…
Read more

Please listen to my story

Something unprecedented is happening in Latin America!. More than one-sixth of the population of Venezuela, 5.6 million out of 30 million, has…
Read more

Kitchens in the sky

With Peru’s vaccination programme painfully slow, they were the ones most at risk from infection and the ones with the greatest responsibility…
Read more

We were all strangers once

I was shocked when I received a message from her saying that Henry’s father had been killed in a car accident. She asked me to relay the terrible…
Read more

The burden of the Gospel

“Father, what is a yoke?” I asked the other nine, who were all younger than 50 and city dwellers, if they could explain it. None of them had…
Read more

One of a kind ordination

As I ponder the event, before, during and after, I realise that although my diaconate ordination was not the ideal one I had in mind, I cannot…
Read more

I have had my own battles with these pesky creatures. They have fed on my blood and interfered with my work by taking my attention away from…
Read more

Finding positives in the pandemic

I hope this pandemic will bring transformation within all of us and profoundly modify our core beliefs and long-term behaviour. I hope it will…
Read more

As an outsider and a foreigner from South Korea, I enjoyed my relationships with the people of the parish, but it was not easy to be recognised…
Read more