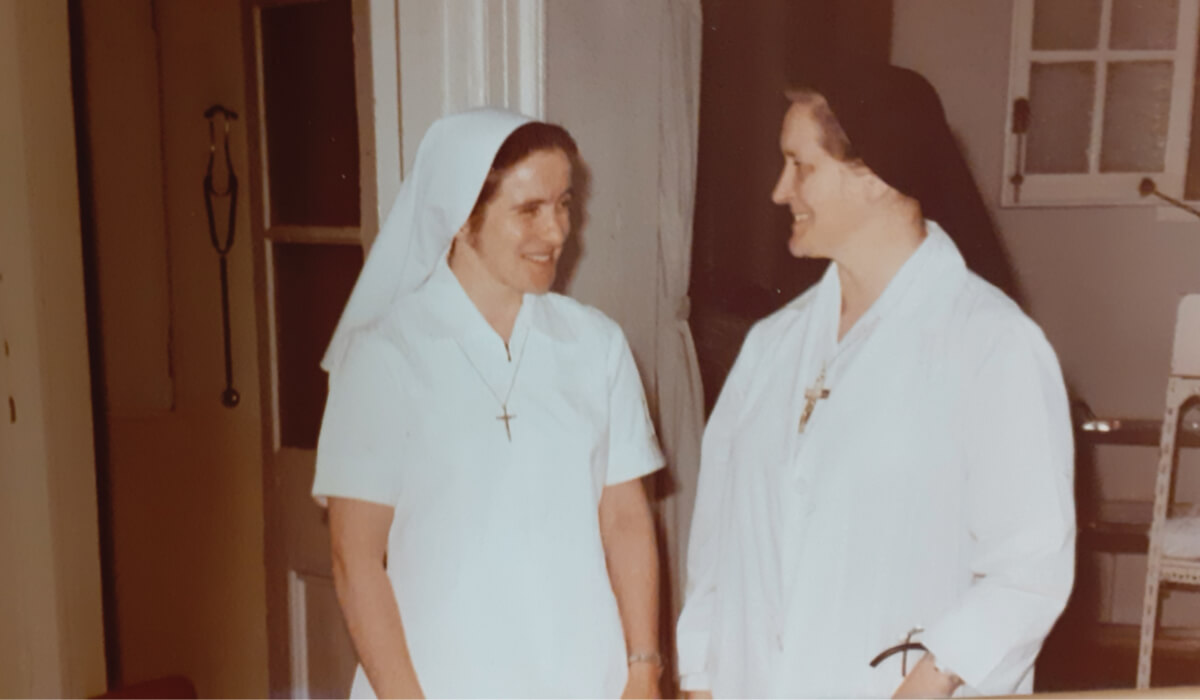 Columban Sr Mary Greaney (left) speaking with Columban Sr Mary Aquinas Monahan (right), who was the Medical Director at Ruttonjee
Sanatorium for almost 40 years. The Columban sisters were responsible for the administration of the sanatorium as well as running nursing school. The sanatorium was also a teaching hospital for medical students. File photo: St Columbans Mission Society

It was hot when Sr Mary Greaney arrived in Hong Kong in 1971. There was no air conditioning and no fans, but plenty of mosquitoes and a couple of dozen Columban sisters to welcome her to her first mission appointment; the Ruttonjee Sanatorium.

The former British colony had been a hotbed of infectious disease from its foundation in 1841 and tuberculosis (TB) was among its major scourges, due to poor environmental hygiene and sanitation, overcrowding, malnutrition and the influx of returning residentsand refugees from China after World War II.

In 1949, a wealthy Parsi businessman, whose daughter had died of TB at a young age, endowed a former British naval hospital to care for patients and do research on a cure for the rampant sickness. The Columban Sisters were contracted to administer the facility.

Sr Mary Greaney arrived as a newly-graduated nurse, ready to take up her duties in what was a quite unfamiliar setting for a hospital run by a religious congregation. The wards carried no sign identifying the faith of the administrators. It was every inch a Catholic-run secular facility. Not even a crucifix adorned a wall. The challenge to the Columban Sisters was to imbue a Catholic ethos into a secular institution through the witness of their lives, as well as expert loving service and care of staff and patients.

At its opening, the bishop of the colony charged the sisters with bringing people to the Lord by showing the Gospel in action… “and by seeing Christ in them.” For Sr Greaney this was quite a challenge after living most of her life among Catholics, but her vocation had been nurtured through serving the Travellers (often derided as Gypsies) with the Legion of Mary near her home in Ireland. “They were living in canvas tents on the side of the road; they were really poor. Every week, two of us used to visit them to prepare them for first communion. It was while I was doing that work, I began to think about being a missionary. It struck a chord,” she told The Far East.

Joining the Columban sisters at the age of 29, she was older than her classmates in the formation programme, but managed to form long-lasting friendships and after her first profession was sent to London to study nursing. Educated and mature, Sr Greaney was ready to take up the difficult mission in Hong Kong, which was to remain her home until 2008. The sisters did ground-breaking work, developing an out-patient programme to treat their poor clientele, and through visiting their ramshackle dwellings encouraging them to complete their treatment.

“TB was rampant. It was so dangerous. Two of our sisters were doctors and they were internationally renowned for their work on TB,” Sr Greaney explained. “I spent 17 years in the sanatorium and by that stage, it had become a much smaller problem, partly because of our work.” It was time for the sisters to move on.

As medical facilities were still raw in the city at the time, there were plenty of areas of need. Sr Greaney moved into palliative care and hospice work. It was a pioneering enterprise at the time.

Today, she holds onto her mission roots, working among the Chinese diaspora in Ireland, but she maintains that although all the Columban sisters left Hong Kong in 2015, it was a decision not made lightly and with a willingness not to cling on tightly. Most importantly, they bequeathed a spirit of excellence of service and dedication to tutored care to those who picked up the challenges they pioneered.

This article was written on behalf of St Columbans Mission Society.

Listen to "Mission moves on"