…of football and welcome of the stranger 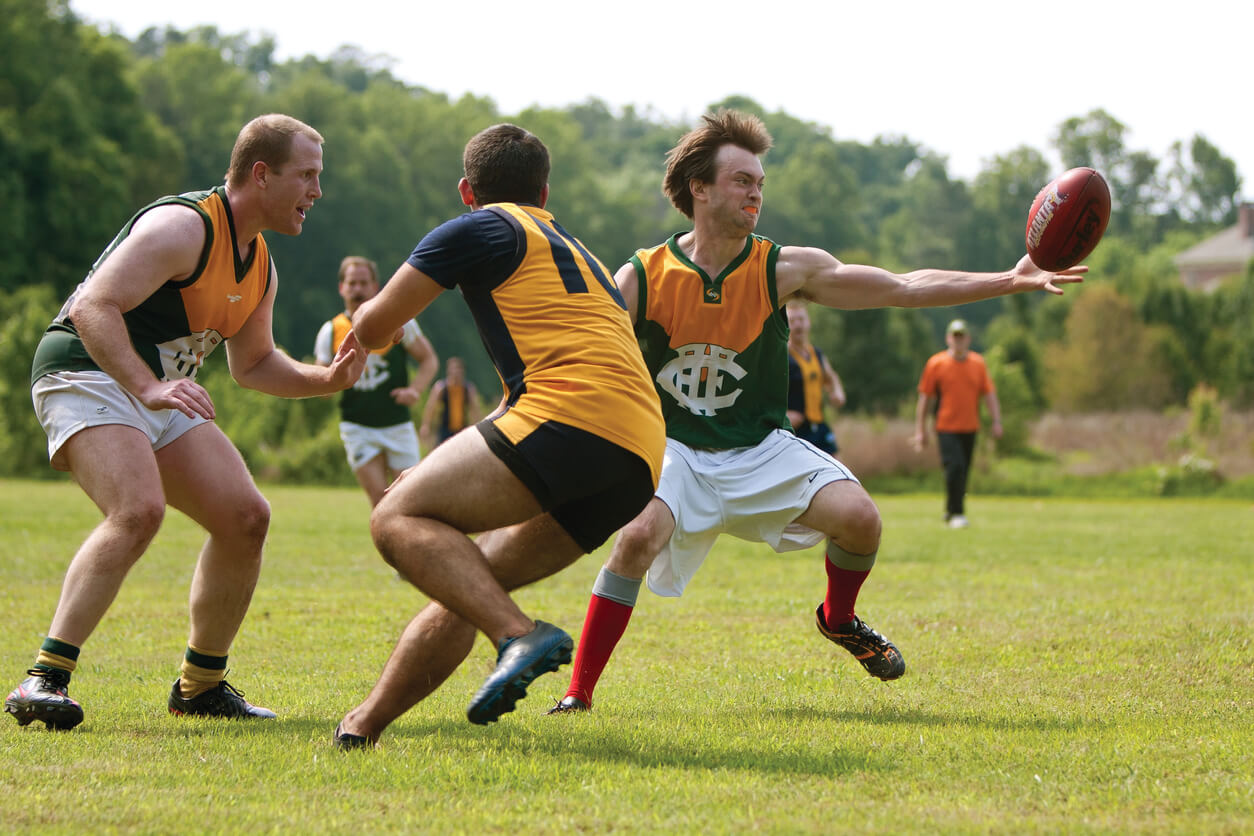 A stranger settled himself in the rough shelter at a country football match, attracting the furtive glances of the diehards gathered to cheer on their local team against the invaders from the next town up the road.

The air is fresh, and the stranger moves a little towards the centre to escape the bite of the wind. The movement is a trigger for tentative interrogation. Who is this stranger - friend or foe? “Who are you supporting?” asks a timid voice. Ah! The home team. A good beginning.

Curiosity takes over. “Why are you here?” A vague “passing through,” does not satisfy. “Where are you staying … visiting friends or on business?” “How do you like our town?” Then the crunch, “What do you think of our football team?” This one brings some engagement. The stranger knows football and waxes eloquent about the ebb and flow of the spectacle unfolding on the neatly manicured oval with its ring of trees in autumn bloom, bringing some ease to the situation.

The scene is reminiscent of the words in John O’Brien’s Around the Boree Log reflection on 'A stranger in the church'. A city-slicker at Mass in an outback town is an object of far more than simple intrigue. The neatly pressed clothing with “… hair like a poet” no doubt distracted the gathering from the priest’s words of wisdom as interrogation must wait for the gathering in the dusty surrounds outside the front door.

O’Brien tells of the inquisition, “We found out what his father did and how they were related.” But the story does not end there. There is tension between the inclination to welcome and the fear that this stranger with the poet’s hair and inability to bless himself could upset the rough-and-tumble culture of the little community. The fear intensifies at the suggestion from one young man, no doubt somewhat distressed at the possible diminishment of the pool of “eligible ones”, “That ‘that there toff’ was courting.”

His horror deepens, as this specimen from the city is seen “… at Mary’s side disporting. And Mary looked so coy and trim …” This interloper is posing a threat to the well-honed rhythmic patterns of life that bring comfort and security to an otherwise pretty tough life on the land.

These are stories of shyness, discomfort at the unexpected, fear of the unknown and even a prickle in the comfort zone. Nevertheless, they are things oft’ experienced and demand the development of personal mechanisms to deal with them. Most people do this fairly well, and while curiosity may sometimes be interpreted as nosey, and ignorant questions as precocious or truculent, most encounters are negotiated with a wholesome dollop of grace.

However, the natural tendency to avoid the discomfort does breed tension with its concomitant heartache, discomfort and suffering. Pungent aromas emanating from the kitchen of the new neighbours may not always be welcome. Strange clothing may become a topic of ridicule, dark skin may attract a type of humour that is not particularly funny, and fears may evolve into vicious polemic.

No doubt we are most at home and relaxed with our own kind. However, this is not the makeup of our world. God created and beatified diversity in nature, in the animal world and in our human communities, but the mysteries of diversity have not always sat happily with us, even though our Judeo-Christian tradition is riddled with stories of ventures into the unknown.

Abraham and Sarah wandered far into unknown places and lands in obedience to the Lord’s command, “Go from your country and your kindred and your ancestors’ house to the land I will show you” (Genesis 12:10ff).

Famine and war compelled them to keep moving and the continual challenges they faced forced them to adapt their customary tribal values and habits in sometimes quite bizarre ways.

History may be a good teacher, but its lessons are easily forgotten. So it was with the Israelites, except for the ancient ones, those with nothing left to lose, who did not forget and reminded their errant youth of their own salvation and the imperative to welcome the stranger and the alien.

The stranger is to be offered hospitality, they insisted, and the host washes their feet, as well as provides food and shelter, but not interrogation beyond ascertaining immediate needs.

The stranger too was bound by obligation, only staying for the agreed time and refraining from coveting the goods, wife and daughters of the host, who was to be blessed upon departure.

And so, the Book of Deuteronomy (24:17–18) details this practice as law, lest it be again forgotten. “You shall not deprive a resident alien or an orphan of justice; you shall not take a widow’s garment in pledge. Remember that you were a slave in Egypt and the Lord your God redeemed you from there; therefore, I command you to do this.”

Abraham lived in quite a different society from ours today, but the challenge to offer hospitality remains, although how it is delivered, of course, must vary.

The law expressed in the Book of Deuteronomy is no indication that the people readily practised the injunction of hospitality to the stranger. It is far more likely that they did not. Like many today, they had forgotten their own days of slavery and the salvation they received.

Even the wise King Solomon forgot, conscripting slaves to support his empire. Foreigners became forced labour - the people forgot they were once slaves led to freedom by the Lord.

Hospitality is neither easy nor simple and can be risky and daunting. Yet God’s creation is given for all to share, its produce for the benefit of all the people, not just the first squatter on the block.

We face this challenge as individuals, as a community, society and state. As Christians, we must remember that the fundamental call is to act not only with generosity but with justice.

The stranger at the football found himself embedded in a search for some common ground on which he could be welcomed. It took time but is ultimately squeezed out with the anticipation it will be graciously accepted.

What happened to ‘that there toff courting’ at the local church we are not told, but the pride shown in the two African refugees on the centre- and half-back lines of the local football team, described as “really good blokes”, is a sign that welcome of the alien is a living virtue in community. The stranger finally won some approbation signalled by the acquiescing nodding of heads when he added “and damn good footballers too!”

Nevertheless, we still have far to travel in the quest to embrace the miracle of diversity with which we have been blessed by our creator.

Listen to "…of football and welcome of the stranger"