Servant of God and chaplain in the United States Army 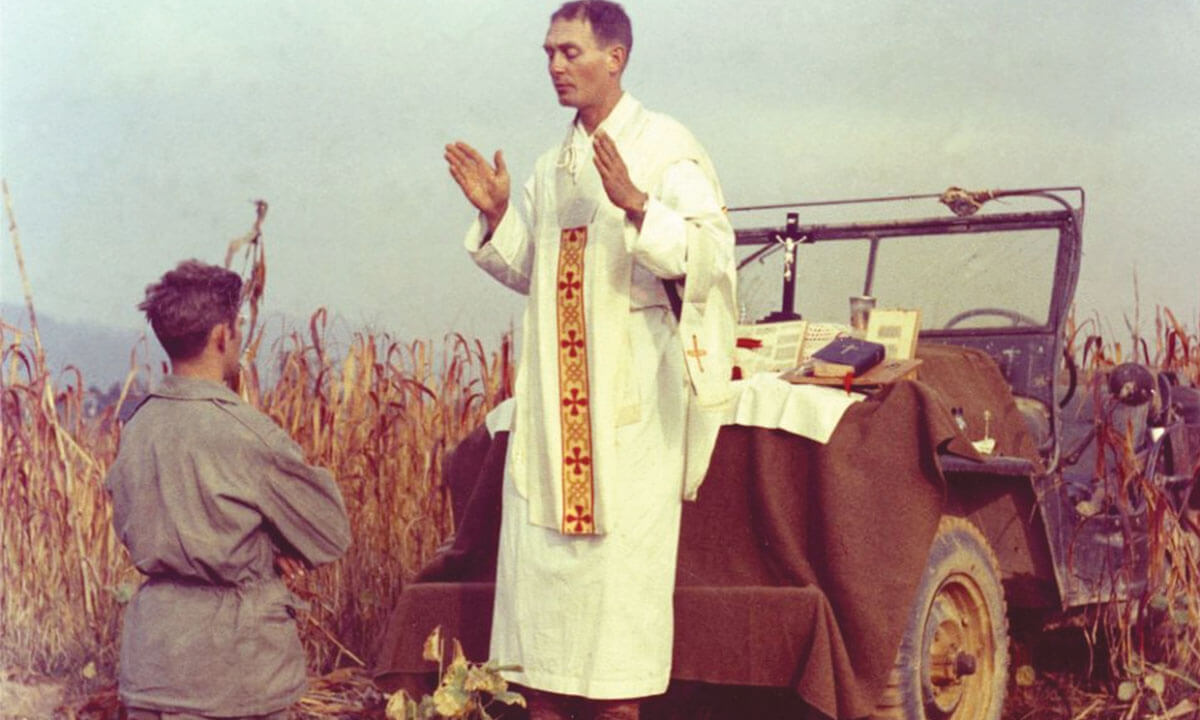 Photo: U.S. Army chaplain Fr Emil Joseph Kapaun, who died May 23, 1951, in a North Korean prisoner of war camp, is pictured celebrating Mass from the hood of a jeep, October 7, 1950, in South Korea.

The chapel at the central house of the Columbans in Seoul, South Korea, was built as a memorial to five military chaplains from the United States who gave their lives during the Korean War. One of the five was Fr Emil Kapaun, from the diocese of Wichita, Kansas, whose cause for beatification is in process and has already passed the first stage of investigation.

He was declared a Servant of God by Pope John Paul II in 1993. Fr Emil was ordained in 1940 in Kansas and arrived in Korea in July 1950 as an army chaplain. He died of pneumonia and malnutrition in a Chinese-run prisoner of war camp in North Korea on 23 May 1951 at the age of 35.

Fr Emil is remembered by his fellow soldiers as a man of great compassion, of outstanding courage and selfless service to anyone in need. He was awarded the Medal of Honor - the highest military award for valour.

His acts of bravery and service are noted by numerous fellow soldiers. Among many acts of self-sacrifice and encouragement, he is credited with saving the life of a wounded United States soldier by bravely brushing aside the rifle of one intent on killing him. He picked up the wounded man and carried him to safety.

Soon after the war ended, Fr Emil’s remains were brought to Hawaii, where they lay unidentified until March 2021, when dental records and DNA testing established his identity beyond any doubt.

Their names were inscribed on a bronze plaque at the entrance to the chapel and their photographs displayed in the sacristy. For the following 50 years, the chapel was a place of worship for Columban missionaries until 2003, when it had to be demolished to make space for a new mission centre. We Columbans are rightly proud of our association with Fr Emil and his companions. Our central house in Seoul was for them a home away from home. During a gruelling time in their ministry, it was for them a place of relaxation and prayer. Fittingly we link their sacrifices with the offering of our own seven Columbans who gave their lives during the Korean conflict.

Over 70 years have passed since the Korean War broke out and unleashed a tsunami of suffering on the Korean people. The beatification of a lowly participant in that brutal conflict will hopefully bring healing and reconciliation, not only to the people of the two Koreas on either side of the Demilitarised Zone, but to the wider world as well. Foremost among the many millions longing for such a reconciliation will be Fr Emil Kapaun.

Photo: U.S. Army chaplain Fr Emil Joseph Kapaun, who died May 23, 1951, in a North Korean prisoner of war camp, is pictured celebrating Mass from the hood of a jeep, October 7, 1950, in South Korea.