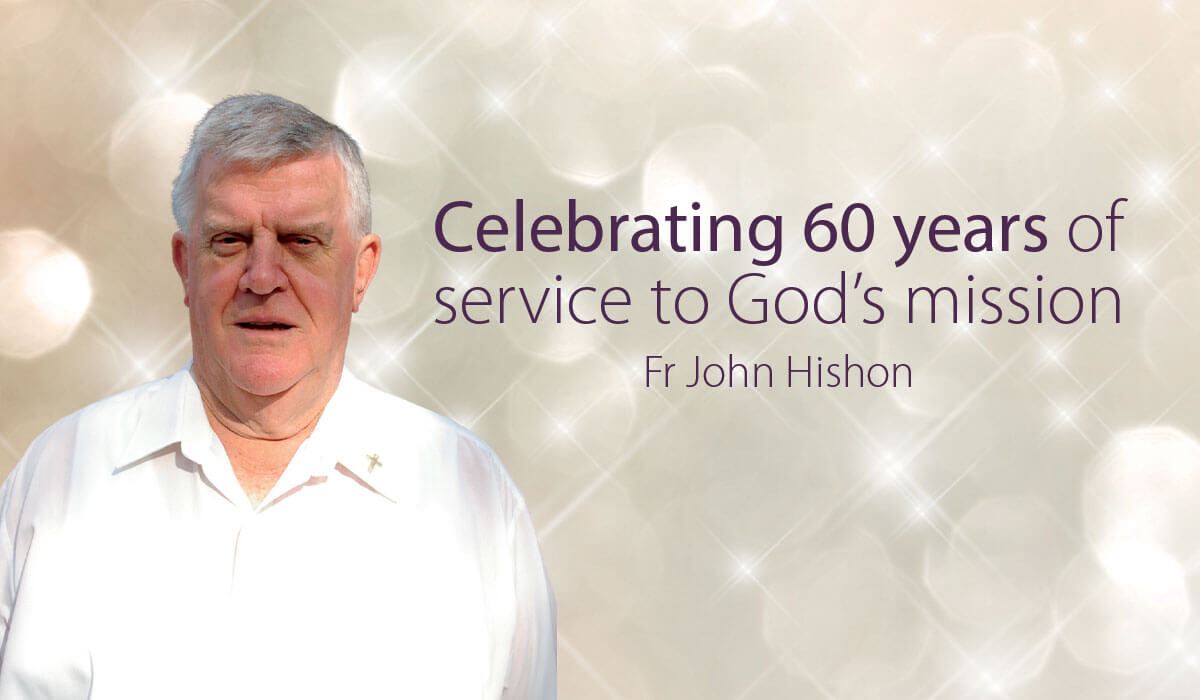 Columbans around the world and many people in New Zealand, the Philippines and Australia will be together at least in spirit with Fr John Hishon on Friday December 2, 2022, as he celebrates his Diamond Jubilee of ordination to missionary priesthood. It was in the Cathedral of the Blessed Sacrament in Christchurch, New Zealand, where he knelt before Bishop Owen Sneddon, Auxiliary Bishop of Wellington, and was ordained a priest of St Columbans Mission Society on that day in 1962.

Born in Isla Bank, Southland NZ, John was the sixth child of a family of seven born to Richard and Alice. His sister, Betty and brothers, Desmond, Richard, Patrick and Philip are now deceased leaving his younger sister, Norah, to celebrate with him on this joyous occasion.

Fr John received his primary education at the Isla Bank Public School and secondary education at Marist Brothers, Invercargill, and St. Bede’s College, Christchurch. He then worked at the Public Accountant’s office in Invercargill for three years while serving as a Reserve in the NZ armed forces.In 1955 he studied Latin language in preparation for joining St Columbans Mission Society and beginning formation at the new Spiritual Year House at Sassafras, outside Melbourne, Australia. John then completed his philosophy and theology studies at the Columban Seminaries in Wahroonga and Turramurra, NSW. After his ordination, December 2, 1962, Fr John spent a few months on a pastoral assignment in the parish of Mt Lofty in the Archdiocese of Adelaide, South Australia.

An appointment to the Philippines soon followed. After language studies in Ozamis City, Mindanao, Fr John began his missionary service in the parish of Mambajo, Cagayan and continued it in Aurora, Zamboanga del Sur. After a home vacation in 1969 he returned to the Philippines to serve as parish priest in Ramon Magsaysay and later in Midsalip. The year 1974 brought an appointment to the Columban Region of Australia/New Zealand where he engaged in promotion and fundraising for the Columbans in several Australian dioceses. This was followed by an appointment as Superior in the Columban House in Brisbane and later to the position of Regional Bursar. This appointment came with some accountancy and economic studies in Melbourne. Later, a number of years as Columban Superior in New Zealand was followed by a re-appointment to the Phillipines and the parish of Iligan in the diocese of Linamon in Mindanao.

More recent years have seen Fr John back in our Essendon house where, after a period as Superior and House Manager, he continues to exercise his brain at the Bridge table and doing crosswords, following many sports and hobbies and keeping up his relationship with many friends, relatives and confreres.

Fr John has always been a ‘people’ man. He has always been attentive to the sick. As he approaches his 89th birthday (born 8 March 1934) he is not as mobile as he used to be, but that is a restriction that he has strategies to overcome as he gets to know people in the neighbourhood and beyond. We wish him our warm and sincere congratulations.

Listen to "Celebrating 60 years of service to God’s mission"