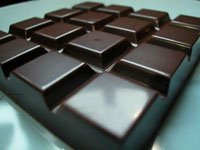 While you are dreaming of chocolate, do you ever wonder where the chocolate comes from before it melts so wonderfully in your mouth?

There is an interesting but largely unrecognised link between us, our eating habits and the people who produce what we eat. One connection is between the production and marketing of chocolate, slave labour and the debt burden of poor countries. Our love of chocolate can sometimes increase the suffering of our brothers and sisters in poorer countries.

In Australia children, families, schools and community groups are targeted by chocolate manufacturers. Schools need money. Chocolate companies offer to help them raise funds and in turn sell a lot of chocolate. Who is helping whom?

Today, major religious festivals have also become marketing opportunities rather than religious events. At Easter, when Christians focus on the death and resurrection of Jesus Christ, the spotlight is on chocolate.

During Lent, Christians are reminded to repent and live the Gospel. Jesus lived and died to bring the good news to the poor, to proclaim that captives be released, to bring sight to the blind and to let the oppressed go free. (Luke 4:18)

As we continue to celebrate the risen Christ, we are challenged to see the signs of our times, to learn who the poor, the captives, and the oppressed, are in our world and to work to give them life.

How is Chocolate Made?

Chocolate is made from the cacao bean which grows in a cacao pod on the cacao tree. From 25 to 50 cacao beans are extracted from a cacao pod. These beans are fermented and dried before they are processed into chocolate or cocoa. Cacao beans contain a large amount of fat and small amounts of mildly stimulating alkaloids which include caffeine.

The beans are roasted and ground in order to remove the fat. The fat is cocoa butter. Cocoa butter is also used in pharmaceuticals and cosmetics. Ordinary chocolate is made by adding extra cocoa butter to ground beans.

The Real Price of Chocolate

These days major religious feasts have become marketing opportunities rather than religious events. At Easter the spotlight is on chocolate. But the price paid for Easter eggs is much more than that at the checkout. It includes the costs on the lives of cocoa farmers in West Africa.

Even as some dedicated people give up eating chocolate during Lent, schools and youth groups needing money are targeted by chocolate companies pushing fundraising ideas. According to the Confectionery Manufacturers Association, Australians buy around 200 million Easter eggs in one year. But while we are scoffing them down at a rate higher than most others in the world, how many of us realize that those slaving away on the cocoa farms are struggling under the weight of utter poverty? Except for Brazil, the cocoa producing nations are among the countries identified as the poorest in the world.

Our Centre for Peace, Ecology & Justice has been conducting workshops on the connections between chocolate, slavery and debt for more than 10 years. Learn more about: Cocoa producing countries

The world was alerted to child slavery involved in the chocolate labour chain in 2000 when child slaves were found on farms. Stories were told of boys such as Ali. He was 12 years old when a slave trader promised him money and a bicycle for working on a cacao farm in Ivory Coast, where 43 percent of the world's cocoa beans are grown. Instead, he was sold to a farmer, who regularly beat the boy. After he was freed by local authorities and returned to his village in Mali, he described 12-hour days working in scorching heat, hacking pods from cacao trees. As chocolate is not part of traditional diet, he never tasted the fruits of his labour. (Global Exchange)

Through pressure by public and non-government organizations, major chocolate manufacturers were forced to recognize that they had an ethical responsibility to do something about this situation. In 2001, the Harkin Engel Protocol was announced between chocolate manufacturers, antislavery groups, cocoa country governments and US government agencies to work to end the worst forms of child labour and to ensure that slavery would no longer be used to produce chocolate and cocoa. (Responsible Cocoa)

It took 7 years but chocolate manufacturers have been part of the International Cocoa Initiative and since 2008, one of their activities is the collection of data on cocoa labour practices in Ghana in an effort to be more ethically responsible. In 2010, Cadbury Australia/NewZealand announced that its Dairy Milk chocolate would be Fair Trade. This is progress in ethical accountability. (Cadbury Fair Trade)

Fair Trade benefits producers and community development and helps the economy. It ensures that cocoa farmers receive a fair price for their crop; creates links between farmer owned co-operatives and buyers; provides access to affordable credit; and promotes environmentally sustainable practices. Slave labour is prohibited and the farms are inspected to ensure that they conform to Fair Trade standards. (Fair Trade Association)

Find a Fair Trade chocolate outlet near you, visit: www.fairtrade.com.au

Because of the complex web of corporate company subsidiaries, the question must be asked. “Is an organization that sells a product with the label “Fair Trade”, also a Fair Trade organization?”

Another hard aspect that must be looked at is the connection between the poverty of the cocoa farmers, the debt burden of their countries and the unjust trading system.

Ivory Coast, the world’s leading producer of cocoa is a Highly Indebted Poor Country. Its total external debt in 2008 was US $19 billion or $975 per person. Much of the debt was illegitimate - this debt includes money that was lent to oppressive leaders with the knowledge that it would not benefit the people. Funding for health, education and other programs was reduced. In spite of recent debt-restructuring by the IMF, Cote d’Ivoire is now in further economic difficulty due to civil conflict.  Because of deregulation, Ivory Coast is open to sharp price swings of cocoa on the world market. Cocoa farmers are not paid a fair price for their cocoa beans. At the same time, large transnational chocolate companies, speculative traders and investors make large profits from the price shifts.

The money that is being paid on debt servicing should be used for schools, hospitals and meeting basic needs, thus contributing to the elimination of the slave conditions on the cocoa farms.

Debt remains one of the largest barriers to human development. Creditors have a co-responsibility for illegitimate debts. Debts that are considered unjust in these terms need to be cancelled in full.

Worldwide the Columban Missionaries are working for this. In Australia, we are represented on the board of Jubilee Australia which campaigns on this issue of debt. (Jubilee Australia)

Explore the AFRODAD website and read more about the debt issue: www.afrodad.org

Some Ideas and Questions to explore: