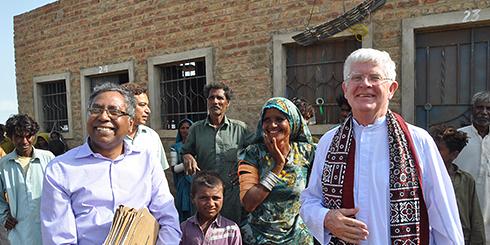 The estimated population of Pakistan in 2016 was 195.4 million. It is the world’s sixth most populous nation. According to the current, Pakistan Economic Survey 44% of the population is aged 19 years or less. The Pakistan government calls this a national “demographic dividend” which is obviously dependent upon investment being made in human development, education, training and health.

Presently, there are six Columban Missionaries assigned to the Pakistan Mission Unit. Five are Columban missionary priests and one long-term Columban Lay Missionary. These missionaries hail from three different countries including Ireland, New Zealand and the Philippines.

Columban Missionaries in Pakistan work in three parishes in two separate dioceses, Lahore, in Punjab province to the north-east, and Hyderabad, down south in Sindh. The two dioceses are more than 1000 kilometres apart. Two of the Columban Missionaries are assigned to Lahore, one being fulltime in the part-urban, part-rural Columban parish in Lahore city. The other is involved in the ministry work of Formation through teaching, offering educational courses and retreats to diocesan seminarians, young religious and lay people who are being prepared for ministry in various church institutions.

In interior Sindh, in the Hyderabad Diocese, Columban Missionaries minister in two parishes in Badin and Nagar Parkar, where one lay missionary and three Columban missionary priests are assigned. In both dioceses, Parish Ministry involves working with some of the poorest and most oppressed people in Pakistan. Education, Healthcare and Human Rights issues are urgent ministries. Human Rights work, including justice and peace issues, provide an opportunity for Interfaith Dialogue, as issues are worked through with both concerned Muslims and Hindus. 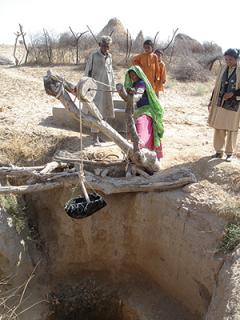 The ministry work of Justice, Peace & Integrity of Creation (JPIC) has always been a priority of Columbans in Pakistan. As well as being actively involved in human rights and justice issues at a grass roots level, Columban Missionaries have been at the forefront of raising awareness on urgent national and international concerns. In the 1990s, this involved the Debt Campaign and the impact of globalisation on the poor. Today, we continue to take the initiative in raising awareness, through our Columban publications and workshops on Climate Change, which is already having a major impact on Pakistan, especially with concerns of water supply. JPIC issues also provide the opportunity for Interfaith Dialogue, as they concern all people.

Formation and the empowerment of lay people is a priority at a parish level in Pakistan, especially of young people. One local lay person is employed fulltime as a co-worker in the Columban parish in Lahore for the missionary animation of the local church.

Columbans and Lay Missionaries have also been journeying closely with women in Pakistan, listening to their stories, encouraging and supporting their active participation in community life and activities. Women in Pakistan are still very much treated as second-class citizens.

Australian born, Columban Fr Robert McCulloch was awarded the Sitara-e-Quaid-e-Azam, the highest civilian award in Pakistan that can be given to foreign nationals for services to Health, Education and Interfaith Relations. Fr Robert set up the first home-based Palliative Care Unit in Pakistan with St Elizabeth's Hospital, which provides care for cancer patients who are terminally ill. His other major contribution includes taking steps to preserve the language of Tharparker, known as Parkari Kohli. He engaged linguist experts from around the world to help the semi-nomadic Hindu tribe of Parkari Kohli in the Tharparkar district design a script for their language.

“The villagers opted for the Sindhi script…People gathered proverbs and sayings and we launched the first Parkari Kohli newspaper, Prem Paracha. Helping save a language and culture is one of the things the Catholic Church has contributed to Sindh.”
(Fr Robert McCulloch SSC in an interview with The Express Tribune, 2012)

In 2011, during the floods, Fr Robert helped arrange food aid and medical treatment to over 1,000 families in Southern Pakistan and built accommodation and housing for the flood victims.

Fr Robert McCulloch has been a Columban missionary priest in Pakistan for over 30 years and now resides in Rome after taking up an appointment as the Procurator General for the Missionary Society of St Columban in late 2011.