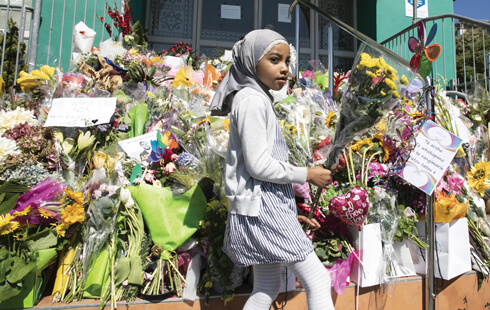 New Zealanders are still coming to terms with what happened on March 15, 2019 when 50 people at Friday prayers at two mosques in Christchurch were killed and many more were wounded.

My own reflections have been shaped in some measure by the theme of Social Justice Week 2018 in New Zealand which was 'Everyone has a Part to Play'. Its focus was belonging. So one of the things that I noticed is that this act of extreme violence was committed by what is referred to as “a lone wolf”. This term suggests an isolated individual with a limited sense of belonging. If there is a connection with any group it is most likely to be only with people who share their view of the world. The impression is that such people have no great capacity or desire for diversity or for relating in a positive way to what is different. The “other” is seen as a threat and therefore to be feared and, sadly in this case, to be attacked and killed.

In the West there is a growing tendency to “go it alone”. We have seen this in the USA which has pulled away from a number of International Agreements, including the Paris Accord on climate change, and is focused mainly on its own interests. We see it also in the UK with Brexit. This movement towards isolation is happening in a world where so many of the big issues we face are global in scope and impact and require coordinated and shared responses. What is needed is for people to come together rather than isolating themselves even more.

That is what we have witnessed here after March 15. What will stay in my memory are images of women of other religious traditions and none wearing headscarves as a very visible act of solidarity with their Muslim sisters. I will remember groups of people of all ages standing together in silence, solidarity, prayer and grief all around this country.

I will remember the image of Andrew Graystone outside a mosque in Manchester holding a sign which said “You are my friends. I will keep watch while you pray”.

What happened here is not an isolated event but one with a global impact. The world noticed and many grieved with us.

Our local Wellington paper, The Dominion Post, on March 19 had a headline which read 'A Wall of Flowers' with a photo of a young girl, Shahida Abdulaziz, making her contribution. Here was a wall that was not about keeping others out, about isolation, but a powerful expression of belonging.

I will remember the Prime Minister, Jacinda Ardern, tapping into the biblical tradition when she said that when one part of the body suffers, the whole body suffers. Her consistent message has been “you belong”. This reflects an attitude that says difference is a gift and an enrichment to those who are willing to embrace it. Many here desire and have a capacity to let this openness be what defines us as a nation.

It is natural that those directly affected will remember most strongly what happened to their loved ones and the sense of loss that this act created for them and the Muslim community. The trauma of the event will take time and effort to heal. Hopefully that will be aided in some way by the part played by many New Zealanders, who responded to this tragedy by coming together and reaching out to their hurting brothers and sisters and reinforcing in many different ways the message “you belong”.

To Muslims in Aotearoa/New Zealand and around the world.

The Missionary Society of St Columban condemns in the strongest possible terms the terrorist attacks which unfolded in Christchurch, New Zealand on March 15, 2019.

We reiterate the sentiments of the Catholic Bishops of New Zealand in their message of solidarity with the Muslim community of Aotearoa New Zealand at this very difficult time.

We also join with Pope Francis in sending condolences to the victims and their loved ones. We condemn all forms of violence, extremism and terrorism; we pray for all those killed and injured in the attacks during the Friday prayers in Christchurch, their families and friends and all affected by this tragedy.

Listen to "Reflection - You belong."