Mary Mak is from Singaporean as is her husband Tony. They have an adopted daughter who was an orphan with serious health issues. 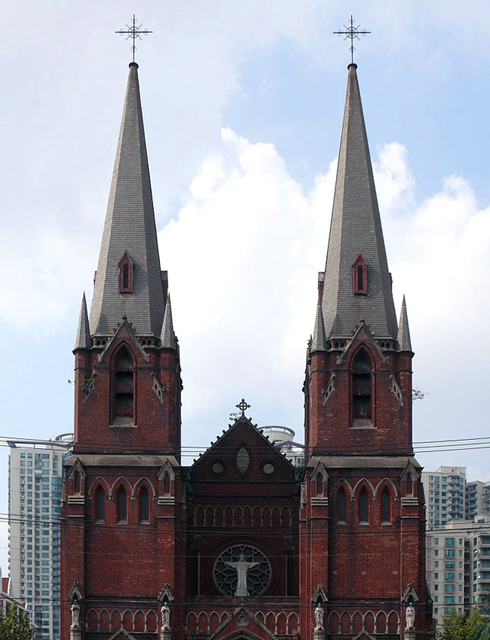 There were many occasions that I bounced off the idea of adopting a child to my husband Tony but he would just brush aside the subject. I did not pursue harder because I was unsure if I could handle an adopted child as I was adopted as a child too.

In 2004 and at the peak of my career, Tony was offered a job in Shanghai. I had to give up my career and follow him. During the first year, I enjoyed my new lifestyle as a “tai tai”, I explored Shanghai and travelled around to many places.

But soon, I became bored and depressed and started to seek the meaning of life.  Life could not be just about shopping and having luncheons and high teas…

The beautiful St Ignatius Cathedral was just across from our apartment. As there were no English Masses offered at that time, we would attend the Chinese Mass but my mind often wandered away.

In late 2005, I discovered that St Peter’s Church had English Masses and that was where I met a Brazilian lady, Cristina and we became friends.  She invited me to join the Choir and later serve in to the Extraordinary Ministry. Through her, I became closer to the Church. At St Peter’s I also learnt about Caritas Shanghai and was deeply inspired by Diane, the director who at that point was managing the orphanage’s project.  I decided to get involved by volunteering and was immediately asked to take care of a cerebral palsy girl for a week in my house.

I had a lot of apprehension about taking care of children, let alone children with disabilities.  However, there was this inner voice that kept whispering to me that God would not give me anything that I could not handle, and with Him nothing is impossible. I took the first step in hosting this little girl Tian Mei in my home and because of her I eventually had the courage to lead the orphanage project that same year.  From then on, we frequently had orphans coming in and out of our house whenever they were in Shanghai for surgeries or medical treatment.  I often saw Jesus in these little children and slowly my life had more meaning and purpose.

One thing led to another, and in 2007, a little girl called Xiao Ai (or " Little Love") graced our home and crawled all over the place.  She was about three years old and had the loveliest eyes and sweetest smile and was very eager to call me Mama.

She could not stand or walk as her two feet were severely deformed with a condition called clubfeet. Both her palms were covered with calluses from crawling on the floor.  Prior to her arrival in Shanghai, she had both feet operated on in Beijing but unfortunately the surgery did more harm than good to her.  Her feet were not properly corrected and the operation had damaged some of her nerves and disabled her feet dorsiflexion.

Tony & I soon became very fond of Little Love but we were careful not to become too attached and not to have any false hopes of adopting her as it was almost impossible at that time for an expatriate host family from Singapore to adopt a Chinese child in China.

Fleeting thoughts of adoption started to blossom but after checking with several sources in Singapore and China, we found out that it was almost impossible for us to adopt a child we were fostering in our home. In addition Singapore has no bi-lateral agreement with China for adoption of “special needs” children.  However, just under a year after Little Love came into our lives, we decided to embark on a journey to adopt her.

Through HIS providence and divine intervention, we finally legally adopted Little Love in 2012.  Our joy of parenthood is indescribable and we are so thankful for this precious gift of God's love.

Little Love no longer crawls but walks with confidence. Although the strength in her feet may later regress and she may need to have her feet re-casted or wear a leg brace for life, we are still grateful to God that she is able to move around independently, attend school, play table tennis and go to church every weekend. It doesn't matter what the future’s going to be for her because we have faith that God's plans for her are higher than our own plans.

We moved back to Singapore in the summer of 2015.  Little Love is doing well physically although she still needs to have physiotherapy twice a week. Counting our many blessings - Little Love just came back from her school's regional convention winning 3rd placing for her table tennis and second placing for her puppetry act. This is her very first participation on a competitive level and deep down we all know that these were all God's graces and blessings on Little love.

Miracles happen in our life through the little blessings around us, and I am sharing this with you, all for HIS glory!