In 1929, three Columban priests were sent to the Philippines in response to an urgent plea for priests. In this Catholic nation, thousands of parishes had been vacant for more than 40 years, ever since Spain had ceded the Philippines to the United States. Older people had become indifferent to their faith, and the young were growing up ignorant of religious truths.

Over the next 10 years, more Columbans were sent to take over vast areas on the islands of Luzon and Mindanao. These were pioneer days.

Columbans were engrossed in rekindling the faith of a people scattered over immense areas while struggling to provide for their spiritual needs, training catechists to instruct the children while rebuilding churches that had fallen into ruin.

The Columban Sisters arrived in 1939. Their purpose was to provide Catholic education for poor children.

In 1942, this feverish activity came to a halt when the Japanese invaded the country. Some Columbans spent the war years hiding in the hills with their people; others were imprisoned. Six died violent deaths in the course of the war. 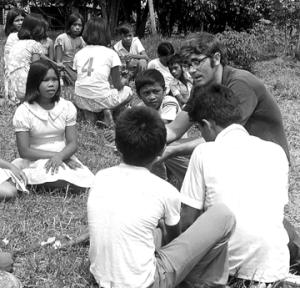 When the war ended, the job of reconstruction began. The need of the young people for education was so great that schools went up in every parish. The Columban Sisters were deeply involved in this effort, administering some of the local schools as well as supplying teachers through a teacher-training college they had established.

Over the years a network of schools, ranging from kindergarten to high schools and colleges, was established. New territories were taken on, notably the island of Negros in 1951.

During all this time, there was no end to the variety of projects aimed at improving the lives of their people, most of whom were mired in poverty. These efforts continue today.

To meet the demands of a constantly growing Church, the emphasis has been on training lay leaders to direct basic Christian communities in recent years, especially for those remote areas and villages that a priest can visit only periodically.

Much has been achieved over the years. Where once-extensive territories were almost solely served by Columbans, today there are some 10 dioceses with their own Filipino bishops and priests.

But the goal of the Columban Fathers is not only to build a self-sufficient Church but to instill a missionary spirit. That Columbans are succeeding in this is evident from the Filipino priests, Sisters and laity who have become Columban missionaries and are serving today in places such as Japan and Pakistan. 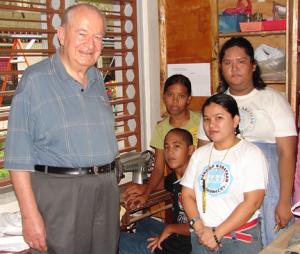 Today, as well as in the past, all these activities are carried out in a political and economic climate that poses serious problems of social justice. These problems coupled with periodic upheavals caused by earthquakes, floods and volcanic eruptions create additional hardships as well as opportunities to share the aspirations, the suffering and toil of the people and so lead them closer to Jesus Christ.

The growth of the local Catholic Church with its own bishops, priests and Religious has allowed Columbans to take on new apostolates, such as caring for handicapped and homeless children, working with tribal peoples, peace initiatives between Catholics and Muslims, and promoting long-range programs to improve the lives of their people.