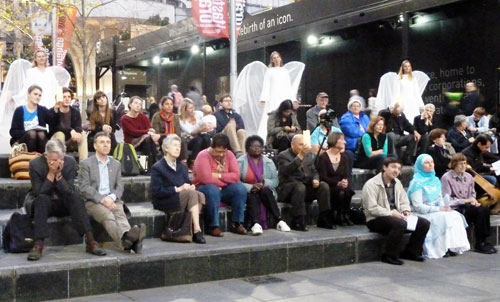 The Faith and Ecology Network (FEN), representing eleven religious traditions, held an interfaith Prayer event on 14th August in the Martin Place Amphitheatre in Sydney titled, 'Respect Creation'. The theme of the public prayer and meditation vigil focused on the impact of mining fossil fuels.

FEN members believe that energy issues go beyond purely economic considerations to embrace moral and spiritual dimensions. The mining of fossil fuels can impact unjustly on the lives of workers, farmers and communities; impact on the ecological integrity of the land itself as a gift and revealing of God for many.

Noel Debien from the ABC Radio Religion Department was the event's MC. He called attention to the powerful message of shared concern expressed by the twelve faith traditions who took part. He shared that it is not the usual message of division that appears in the media. The Vigil showed that difference is not always a barrier.

The vigil opened with Aboriginal didgeridoo player, Glen Doyle. His playing punctuated the vigil and reinforced an atmosphere of meditation. A lament led by the Ashfield Catholic Choir was repeated after each prayer: The Earth is crying out in pain. Respect the life of the Earth. 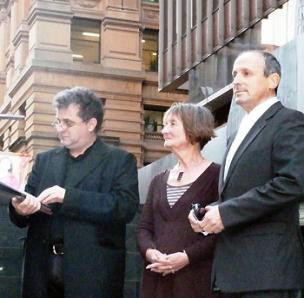 were used. The Peace Angels embraced dance as a meditation.

Over one hundred people participated in the Vigil. Some passing by were also welcomed and joined the event.

Columban Fr Charles Rue offered a Trinitarian Prayer, Life and Death – Pain and Courage – Light for Action,
on the way God acts and the call for believers to take up their role as responsible and conscious members of creation.

The Faith and Ecology Network (FEN) have been meeting regularly since 2002. The insights and language emerging from ecological science is the bond that unites religious traditions. Faith Groups join together to advocate for environmental justice and their common concern about the impact of the fossil fuel mining on communities and the land.