The Golden Rule has launched!

"There is one light, but many lanterns" - With these words the Honourable Mr Victor Dominello, N.S.W. Minister for Aboriginal Affairs and Minister for Citizenship and Communities, officially launched the Australian version of The Golden Rule Poster at NSW Parliament last month on 19th June 2013. Leading representatives from various religious groups, members of the public and Members of Parliament joined the Minister in launching The Golden Rule poster that recognises the value that unites us all.

The Golden Rule – treat others as you would like to be treated – is at the heart of all religious traditions. The Golden Rule poster displays this principle of reciprocity in the sacred texts and symbols of thirteen different religions, including Aboriginal spirituality.

Dr Tom Calma AO, who has dedicated his life to improving the lives of Aboriginal and Torres Strait Islanders, gave the keynote address where he highlighted recent examples of discrimination against Aboriginal people in sports and healthcare and stressed the importance of The Golden Rule in achieving reconciliation between Indigenous and non-Indigenous Australians. Respect and recognition, he emphasised, are key to achieving equality and justice for all Australians. 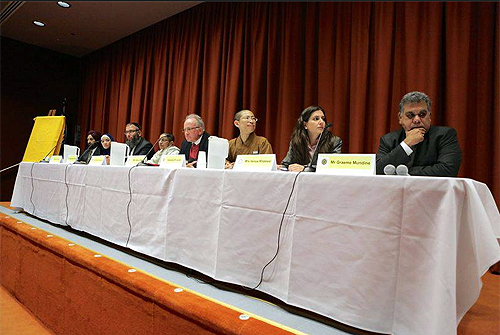 Guests had the privilege of listening to a panel discussion led by author and broadcaster, Rachael Kohn. The panel, comprised of representatives from eight different religions, explored the reality and the challenges of living The Golden Rule in the 21st Century.

Mrs Venus Khalessi, Director of Public Information for the Australian Baha’i community, spoke about the plight of Baha’is in Iran and the heroes of justice who have stood up for their Baha’i brothers and sisters. Khalessi described these "heroes of justice" as "non-Baha’is, just ordinary Iranians who treated others how they want to be treated."

Venerable Dr Juewei, an active member of the Buddhist community said, "The Golden Rule translates into what we see as karma. We all want a better world and there are three ways to achieve this - through good deeds, good words and good thoughts."

Panelists used anecdotes and personal experiences to highlight the reality of living The Golden Rule, and the importance of passing on this value to future generations. Rabbi Mendel Kastel, CEO of the Jewish House Crisis Centre, has spent time with teenagers on the street. "It can get ugly at times," Rabbi Kastel said. "The idea of encouraging kids to respect each other and acknowledge that we’re all the same is vital."

The panelists were open and honest. After being asked to describe a time when The Golden Rule was not upheld, Christian representative Rev David Gill recalled a conference he attended on the mission of the Church in Asia. "We had just finished a session and everyone began making their way to the dining hall. There was a participant in a wheelchair and the dining hall could only be reached by steps… After being stuck for some time, a Buddhist and a Muslim helped the Christian in the wheelchair." Rev Gill posed the question, "Why are we so preoccupied with theology that we can’t see the person in need?"

Mr Bawa Singh Jagdev OAM, secretary of the Sikh Council of Australia, concluded the panel discussion by challenging everyone to incorporate The Golden Rule into their everyday actions, "If every person’s actions reflected The Golden Rule, the world would become a paradise on earth."

The launch and publication of the Australian version of The Golden Rule Poster is a project of the Columban Mission Institute’s Centre for Christian-Muslim Relations.

The Golden Rule poster can be purchased online at: www.columban.org.au/thegoldenrule