Light and Prayers for Lima

Columbans and Religious people from diverse communities all around the world are working, praying and engaging people for the success of the 20th session of the UN Conference of Parties (COP 20) meeting in Lima, Peru, starting from December 1st. In Sydney, the Columban Mission Institute and the Faith Ecology Network (FEN) which is administered by the Centre for Peace, Ecology and Justice will be part of a Multifaith Prayer Vigil organised by ARRCC (Australian Religious Response to Climate Change) to be held this December 2nd. 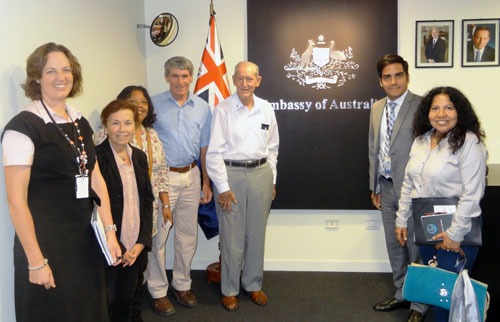 Columban Justice, Peace and Integrity of Creation worker in Lima, Laura Vargas has been part of a group of women and men, including the Inter-religious Council of Peru and the Conference of Major Superiors, who have assumed the ethical obligation to ask the negotiators to look beyond their own countries’ interests. They believe that the life of the planet is in real danger. Peruvians should know. Its Quelccaya ice cap, if it continues to melt at the current rate, will be gone by 2100. Thousands of people who rely on it for drinking water and electricity will be left high, dry, and in the dark. 39% of Peru’s mountain glaciers have already been lost. This is just one example. Other scenarios can be described all around the world. It is the poor who are already paying the highest price yet they have contributed the least to the problem.

The COP 20 meeting is an important staging point towards a summit in Paris in late 2015 when global leaders should agree on a new global deal to cut greenhouse gas emissions. Prior to the Paris Summit, Pope Francis’ encyclical on Creation and Climate Change will be released. It has been reported that he will convene an interfaith summit of religious leaders to mobilise people of faith globally. However, interfaith religious groups have already been active in Peru and elsewhere.

Since late 2013, Laura Vargas along with other Peruvian Christians, Jews, Muslims, Buddhists, Hindus and Bahai’is have held a National Forum during World Interfaith Harmony Week. During 2014, they joined the monthly Lutheran World Federation’s Fast for Climate. They have also visited the embassies of developed countries, including Australia’s, to lobby for cuts in greenhouse gas emissions. Their group started with 60 participants and has grown to nearly 400.

Australian people of faith can act in solidarity with Laura and her group by joining the Light for Lima prayer vigils to pray for the success of the COP 20 negotiations. Organise or join a Prayer Vigil in your community. If that is not possible, pray in your own home or parish. There are plenty of ideas on Our Voices website. Don’t forget to take photos and post them on the Light for Lima website. 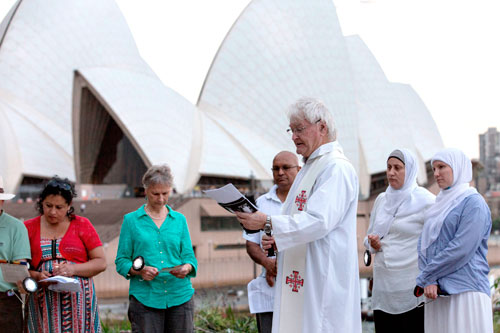 On a balmy summer’s evening on Tuesday December 2nd, people from Christian, Muslim, Hindu and Buddhist traditions came together in Sydney’s beautiful Botanical Gardens overlooking the famous Opera House to pray for the planet. Bundjalung man, Graeme Mundine, acknowledged the traditional Cadigal people of the land on which the people gathered. Their prayers were for planet Earth and all its peoples as the UN Conference of Parties negotiations (COP 20) began in Lima, Peru, on December 1st. Moreover, their prayers were voiced with the hope that countries like Australia come to their senses and take seriously the need to reduce considerably their greenhouse gas emissions as well as contribute to funds to assist poor countries to deal with the consequences of climate change.

The Multi-faith Prayer Vigil was organised by ARRCC (Australian Religious Response to Climate Change) and supported by the Columban Mission Institute’s Centre for Peace, Ecology and Justice and the Faith Ecology Network (FEN). Prayers will continue to roll from different religions all around the world (including in countries where Columbans work) over the 12 days of the COP 20 negotiations as part of the Light for Lima campaign. We urge you to join in the prayer campaign.

Well-known Columban eco-missionary, Fr Sean McDonagh is reporting regularly from the COP 20 negotiations in Lima, Peru, as an observer.

Anne Lanyon is the Co-ordinator of the Columban Mission Institute’s Centre for Peace, Ecology and Justice.