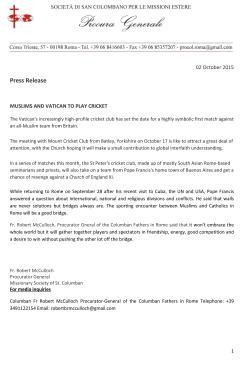 The Vatican's increasingly high-profile cricket club has set the date for a highly symbolic first match against an all-Muslim team from Britain.

The meeting with Mount Cricket Club from Batley, Yorkshire on October 17 is like to attract a great deal of attention, with the Church hoping it will make a small contribution to global interfaith understanding.

In a series of matches this month, the St Peter's cricket club, made up of mostly South Asian Rome-based seminarians and priests, will also take on a team from Pope Francis's home town of Buenos Aires and get a chance of revenge against a Church of England XI.

While returning to Rome on September 28 after his recent visit to Cuba, the UN and USA, Pope Francis answered a question about international, national and religious divisions and conflicts. He said that walls are never solutions but bridges always are. The sporting encounter between Muslims and Catholics in Rome will be a good bridge.

Fr. Robert McCulloch, Procurator Gneral of the Columban Fathers in Rome said that it won’t embrace the whole world but it will gather together players and spectators in friendship, energy, good competition and a desire to win without pushing the other lot off the bridge.