Columbans report on Cyclone in Fiji 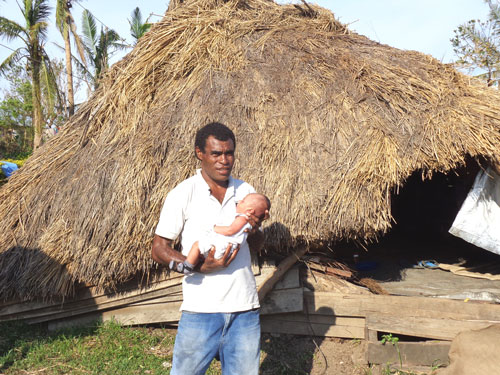 Never before did I find it so hard to write a few lines about a situation.... The nation is numb, shell-shocked and overwhelmed, so are we. The situation has emotionally affected us all and like the nation we are somewhat paralysed, crying within and unable to get up and move into action.

The Holy Year of Mercy: The Fiji Group of Islands was visited last Saturday and Sunday 20th and 21st Feb. 2016 by Tropical Cyclone Winston - but it had no mercy on us whatsoever. It wreaked havoc throughout this little island nation which is comprised of about 300 islands, of which a hundred are inhabited.

There are two main islands in the group: Viti Levu and Vanua Levu. Winston came in from the East and tracked westwards between the two main islands knocking everything in its path - with average winds of 250 km per hour gusting to 325 km per hour. It was a category five cyclone - never before experienced in Fiji and the strongest recorded winds in the Southern Hemisphere.

Thus all of the islands in Lomaiviti (middle Fiji) received the brunt of Wilston's fury, destroying homes and livelihoods by the thousands and cutting many Fijians off from utilities, telecommunications and medical services.

The only Columban parish to be badly hit was Ba where Fr Nilton Iman in Parish Priest, assisted by Fr John Lee. The three schools in the parish have been extensively damaged. St Teresa School, Ba has lost about four or five classrooms including the IT room and its computers. The presbytery too lost most of its windows and louvers. The Parish hall was used as an evacuation centre sheltered a number of families. Trees were uprooted all around the compound and one of them came down and crashed onto the roof of the Lay Missionary house which is also in the church compound. The children's dormitory and a few classrooms in Navala Catholic School were blown away. The children from the dormitory are now billeted in the Church there. The new two story classroom in Votua (built with Japanese aid recently) also lost its roof. This school building is used as an evacuation centre for the villagers of Votua - in times like this and in times of flooding, which often occurs in Votua as the Ba River often burst its banks. St Columban's Church Votua was fairly badly damaged. 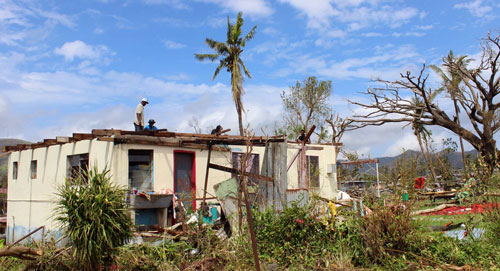 The town itself is wrecked. About six-eight huge big secondary schools of all faiths had their roofs blown off. Such a sad sight to see all these fine buildings with just their walls remaining. The main sports stadium in the town 'Govind Park' also fell prey to the fury of Winston. The experience must have been horrific and frightening for Frs. Nilton and John as it would be their first experience of a tropical cyclone.

Suva was not as badly hit as the Western Division or the Islands in Lomaiviti Group, however, the power was off for several days - only came back here in Raiwaqa yesterday 24th of February and there are still areas in the capital without power. There are five squatter settlements in the parish of St Pius X, in the suburb of Raiwaqa. Most of these people were evacuated to nearby centres - school buildings and church halls etc. I did a quick trip around some of them on Sunday morning in spite of the curfew being in place. Most of their little houses are in low lying places and thus sheltered escaped the wrath of Winston. The owners were in fact returning to their settlements early Sunday morning. One of the settlements, Nanuku, was flooded as the area is tidal - they moved into the nearby Methodist Church. They were visited by Fr Donal McIlraith and our Columban students on Sunday morning and provided them with enough provisions for the day. Fr Donal repeated this for the last few mornings - they have now moved back to their houses 'shacks' The Society of St Vincent de Paul in the parish will now supply them with cloths and other necessities. 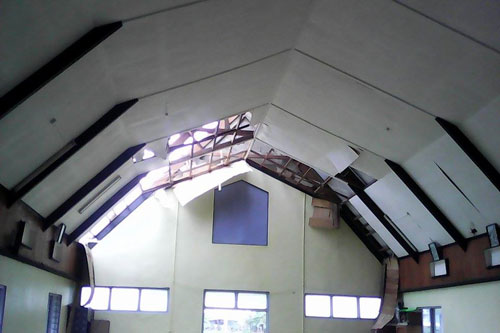 The Church and Presbytery here had roof and ridge tiles and flashings blown off. Apart from that and the water blown into both premises by the winds - there was no more structural damage to the compound. Labasa Parish where Paul Tierney is Parish Priest assisted by JJ Ryan would seem to have been spared. But to their south in Bua and north and north west on the Island of Taveuni - it was the same story of devastation as suffered in the Lomaiviti Group - with whole villages destroyed. Huge damage was done to the parishes and the villages of Solevu, Savusavu, Levuka, Taveuni, Rabi, Natovi, Rakiraki, and of course the Catholic Schools in these parishes suffered extensively too. Their story has yet to be told.

Columban Fr John McEvoy has been a missionary in Fiji since 1972.