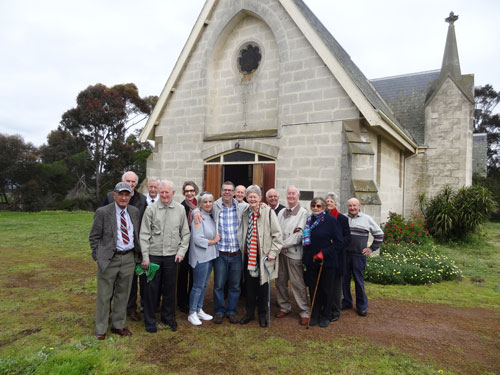 It all came about thanks to a remark of Maryanne and Robert Krall while visting the Columbans in Peru in May this year. She mentioned to me how they were going to celebrate her 60th birthday in Mt Moriac near Geelong, Victoria on July 23. That happened to be close to the time I was planning to join all my brothers and sisters for our family reunion, with Pat home on vacation from the Columbans in Manila and myself from Lima. When Maryanne heard that July 23 would also be the 66th anniversary of my ordination as a Columban priest in Melbourne, Victoria by Dr Dan Mannix, she invited all the Bakers to join her extended family and make it a double family celebration.  Her parents came from Cobden Vic, the same small town where we had been friendly with them and their expanding families for the past 80 years.

We Bakers readily accepted Krall's invitation. So we gathered at Rice Village on the previous day, where Leo (now in Mercy Home, Colac, Victoria), Pat and I concelebrated a thanksgiving Mass for our brother Des's 90th birthday, with the participation of himself and wife Joan with son Chris and wife Jane, and many fellow residents. After the Mass we all enjoyed a memorable dinner in their large community dining room. 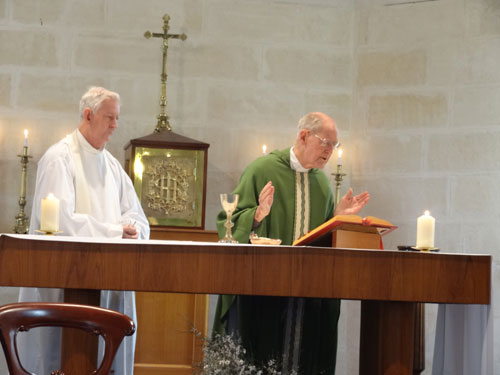 On the sunny morning of of July 23 the Bakers and Kralls gathered at St Patrick's church in Mt Moriac. The original church was built there in 1850. Our Dad, Jack Baker, as a lad studying in Geelong, used to drive the priest from there to that church around 1900-05 and served at the altar as well. The old church was completely renewed in 1953, as the plaque recalls. None of us had ever celebrated Mass in this church, and it was a poignant occasion because we were told that this would probably be the last Mass there ever. The church is to be closed.

The small sandstone church was filled mainly with Krall-Scanlan families and neighbours, with about a dozen on the Baker side. Maryanne welcomed everyone, inviting them to join us in thanking God for so many blessings now recalled afer "three score years" and more. For this occasion I was the principal celebrant, accompanied by Leo and Pat. It was easy to develop the theme of the reading from Ecclesiastes that there is a time for sorrow and a time for joy. The joyful spirit was continued after Mass when the Kralls took us all to their nearby home to share in an abundance of party fare, finishing with pieces of the birthday and anniversary cakes. 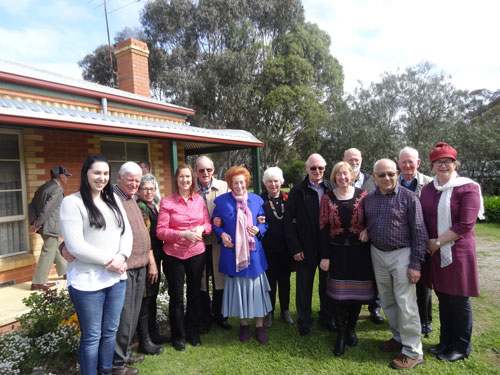 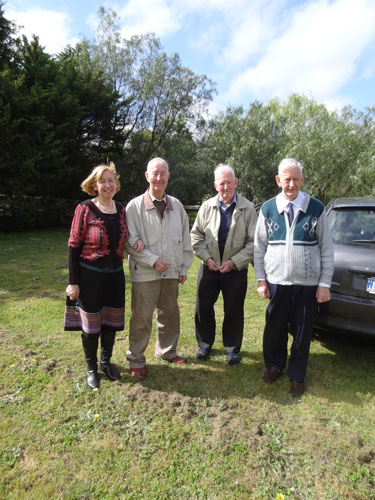