Pages from a missionary diary

June 18th, 1983
Indo-Fijian Fire-walking at Nadera Temple
Today I took photos of the fire-walking at the Hindu temple at Nadera, a few miles from Suva. In the early 20th century the British colonial government brought indentured laborers from to Fiji from South India. These brought their ancient practice of fire-walking with them.

I arrived to find a large crowd already seated on the benches parallel to the 30 foot long fire pit. In this pit there were smoldering ashes, six inches deep, of logs which had been burning for the previous 12 hours. A dozen men and women of different ages, had undergone purification rituals for nine days and, on returning from bathing in the sea, would be led across the hot ashes by the Hindu priest.

Without a telephoto lens I needed to get close to the pit across which the devotees would walk. Spotting an empty space near the pit I excused myself as I crossed over the outer benches to reach it. As I sat down I heard a young woman behind me say to her companion in Hindi, “How can this be! Your father-in-law has just arrived and is sitting in front of you!” She presumed that I was a tourist and didn’t understand Hindi. Communication is not allowed between father-in-law and daughter-in-law in Indian tradition.

I said nothing at the time, but concentrated on taking photos as the Hindu priest cracked his whip urging the devotees to cross the burning ashes. Some ran across, some walked with dignity but all crossed the pit without anyone getting burnt. For Hindus, this was a manifestation of the power and protection of the goddess whom they had worshipped.

When I was ready to leave, I turned around to the two young ladies behind me and said in my best Hindi, “Your father-in-law excuses himself as he must leave now!” They almost fainted. 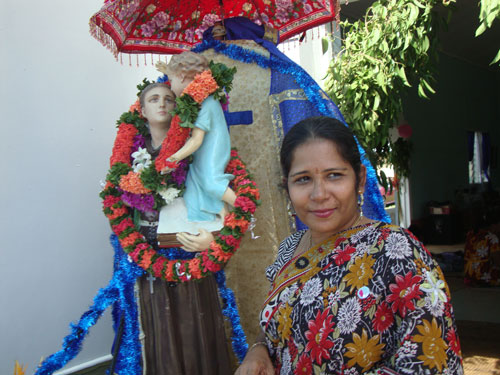 St Anthony is a favorite saint of South Indian Catholics. Today I celebrated his feast with the mainly Indo-Fijian congregation at Raviravi, a rural settlement on Fiji’s main island. A South Indian Catholic, known as Tambi, had built a small thatched church in his honor. Later in the 1960s Fr John Mahoney, a Columban from the U.S., had the present church constructed. St Anthony’s feast is the high point of the Church year in Raviravi.

A few hundred people attended the Mass this year. Afterwards the officials tied the statue of St. Anthony holding the child Jesus on a palanquin with ropes. People vied for the honor of carrying the palanquin as it was taken in procession three times around the church. 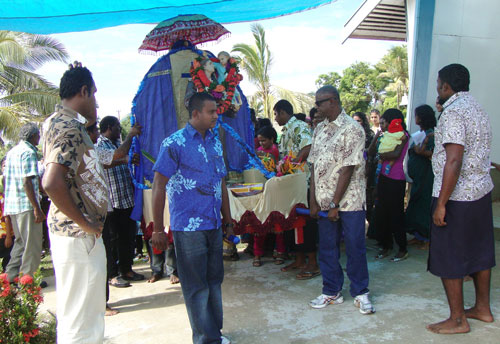 I was walking behind a Hindu woman on the second round when a rope came loose and the statue fell to the ground. I noticed the Hindu lady raise her eyes to the sky rather than see this inauspicious accident. There was general unease as the statue was retied and the three rounds completed. People then made a donation to the Church and waved burning camphor in a brass plate in front of the statue three times.

Later, I happened to be standing behind two Catholic men as they chatted. “Wasn’t it terrible that the statue fell today,” said one to the other. “Ah, yes,” the other replied, “but it could have been worse. Only the child Jesus lost his head. St Anthony wasn’t damaged at all!”

The drive from Ba, where I am stationed as assistant priest, to Suva takes well over four hours. Load-carrying lorries are one of the obstacles on the way, as I found out today.

A few miles outside of Lautoka city I passed a slow lorry on an incline only to be flagged down immediately afterwards by two Indo-Fijian policemen. One of them brought his speed gun over to me as I got out of the car. “You were over the speed limit,” he said. “But I wasn’t doing more than 80 km per hour,” I replied. “The 60km speed limit sign is just back there,” the policeman pointed. As I saw it I realized that it had been obscured from my view as I passed the lorry. I tried to explain this to the policeman. 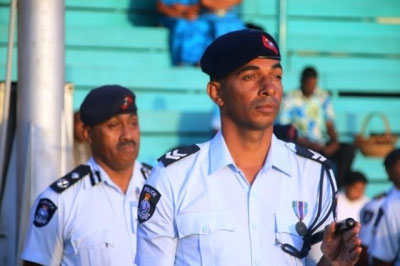 The second policeman surprised me then by asking me in Hindi where I was going. “How did you know that I could speak Hindi.” “I was the policeman who gave you a speeding ticket at Karavi Primary School two weeks ago,” he said. “But I also attended a Hindi wedding that you officiated at in Vatukoula 10 years ago.” I was amazed that he remembered me.

“Is this man a priest?” asked the first policeman who had his ticket book at the ready by now. “Yes, he is,” said my friend. “Then we should ask him for a blessing,” said he, putting the ticket book away. I gladly gave the two Hindu policemen a blessing and continued on my way to Suva.

I am back in Naleba – the rural settlement on the second Island of Fiji where I began, in 1975, my missionary journey. After seven years away I feel the need to refresh my Hindi language here.

Last evening I visited Salen and his wife Natasha. Salen, despite never attending church services, gave me a great welcome and we drank yaqona* and chatted until late in the night. This morning as I breakfasted with them on fresh roti and curry I wondered how I could approach with him the big question of the meaning of life.

After breakfast he insisted on mixing more yaqona*. As we sat amicably together I said to him, “Salen, do you ever think about death?” “Yes,” he said emphatically, “I think about it all the time.” The heart rose up in me - I’m onto something here. “So, what do you think about,” I asked eagerly. “I think constantly about who is going to grab, when I go, all the things I have worked for and accumulated!” he answered. My heart settled down again.