Fr Peter Woodruff tells us about a visit with Columban Fr Colin McLean who has been a missionary in Brazil since 1985. 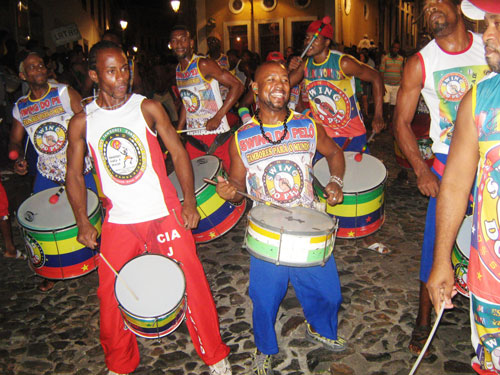 My host in Salvador in north east Brazil was Columban Fr Colin McLean who grew up in Bentleigh and Brighton, Melbourne. He has spent the past 31 years in poor barrios and Catholic parishes of Salvador, where he works in solidarity with Afro-Brazilians who continue to be discriminated against.

One night, Fr Colin with a few local friends took me to the historic centre of the city. We sat at a table in the main square and listened to music and had some drinks. It was an Afro-Brazilian cultural event to which anyone was welcome and the fun went on until the early hours of the morning.

The mayor of the city decided to implement reforms, supposedly to make it safe for tourists and clean up the vice. He has effectively destroyed a joyous Afro-Brazilian gathering in which these people claimed this as their space in a non-exclusive way.

That night, after listening to the musical contribution of a local band we decided to walk around the streets near the main square to see if anything else was happening. As we walked, we heard the noise of drums long before we saw any drummers.

There were about 12 young men walking six abreast up a narrow cobbled street, each with a drum, that was quite loud. They played with such verve and energy. I was not sure who was leading the band but they played as a unit and obviously revelled in what they were doing.

A few young people, mostly tourists, followed them attempting to imitate the vigour of the dance that was led by a young Afro-Brazilian. Most of us stood on the footpath and watched them play as they slowly moved past.

Fr Colin and one of the drummers, known as Tonhaõ to his friends, sighted and recognised each other. The young lad’s face lit up and he seemed to beat his drum with even more enthusiasm. I stood and watched, totally rapt by the sight and the music; it was magnificent.

Once again these young men seemed to be gradually reclaiming a space that had been taken from them through the decree of a city mayor, a man for whom Fr Colin’s Afro Brazilian friends might pray, “Forgive him, Father, for he knows not what he does”.