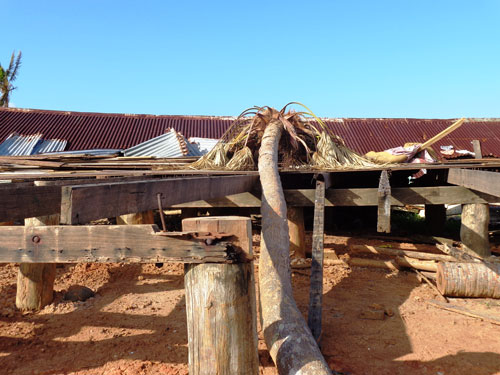 Cyclone Winston, a force 5 cyclone with winds of up to 320kph, devastated much of the Fiji Islands on 20th February, 2016. Of the less than one million inhabitants 62,000 people are still in evacuation centers nationwide and up to 200,000 are living with relatives or under a few sheets of galvanized iron while trying to clean up and rebuild their damaged homes. At least 117 schools have been damaged and the subsistence food crops that most rural Fijians depend on have been destroyed in the affected areas.

Natovi Catholic Mission, one of the 12 Catholic parishes affected, has a damaged church, most of the presbytery roof gone, the Primary School reduced to rubble, teachers’ quarters destroyed and the children’s hostels wrecked.

Five miles down the road the villagers of Qelekuro mourn Sera Tinai, who was pinned to the ground by her collapsed house after taking her children to safety. The nearby river burst its banks and a tidal wave hit the village at the same time drowning Sera in her own home as she lay trapped by one of the house beams. Husband Patemosi wept as he said, “our nine children no longer have a mother. By best friend and soul mate is gone. She was so full of life and joy and always concerned with the needs of others. At functions in the village she would make us laugh with her stories and jokes. She is now gone!” This kind of story is repeated in many villages in Fiji because the cyclone claimed the lives of at least 43 people.

The Archdiocese of Suva has set up a Post Disaster Team. It will liaise with the United Nations Committee which, since the government has declared a 30 day disaster, has taken overall control of the response to the cyclone victims. An initial survey has been done by the Justice and Development Office of the Archdiocese and a comprehensive survey and initial response team will be sent to each affected parish in the next couple of days. The Catholic aid agency, Caritas, is sending two containers from Australia with rapid response packs immediately. Caritas will also send a small technical team to write up assessment reports and, for accountability, fully detailed and documented reports of how assistance received was used.

The Archdiocesan Post Disaster Team will be concerned with the immediate needs for food, clothing and shelter of people of all religions in the twelve parishes most affected. It will also respond to the psychological and spiritual needs of the victims by assessing the extent of trauma suffered and providing training for ‘bare foot’ trauma counselors and for the priests and parish spiritual leaders. The Catholic Women’s League will have members on the parish Assessment and Response teams to consider and meet the needs of women and children.

People in Fiji are responding generously to parish collections for the victims and many have donated money, clothes and other needed equipment. However the extent of the disaster and the limited means of people in Fiji mean that help is needed from brothers and sisters overseas. Donations can be channeled through the Columban Missionaries (see below).

Columban Fr Francis Hoare has been a missionary in Fiji since 1973.

ASSISTANCE FOR THE VICTIMS OF THE DISASTROUS CYCLONE THAT HIT FIJI